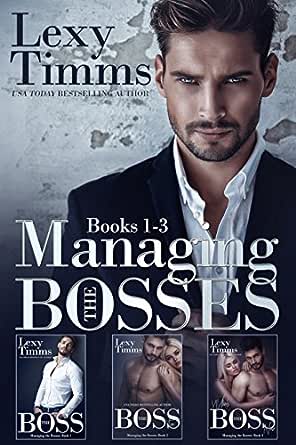 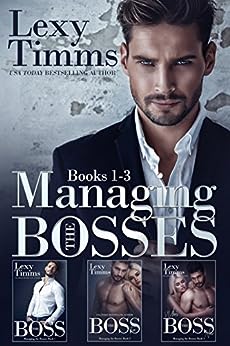 From USA TODAY BESTSELLING Author, Lexy Timms, comes a billionaire romance that'll make you swoon and fall in love all over again.

Jamie Connors has given up on finding a man. Despite being smart, pretty, and just slightly overweight, she's a magnet for the kind of guys that don't stay around.

Her sister's wedding is at the foreground of the family's attention. Jamie would be fine with it if her sister wasn't pressuring her to lose weight so she'll fit in the maid of honor dress, her mother would get off her case and her ex-boyfriend wasn't about to become her brother-in-law.

Determined to step out on her own, she accepts a PA position from billionaire Alex Reid. The job includes an apartment on his property and gets her out of living in her parent's basement.

Jamie has to balance her life and somehow figure out how to manage her billionaire boss, without falling in love with him.


Book 2 The Boss Too

Jamie Connors has decided a job is more important than a boyfriend. She's landed an awesome position working as billionaire Alex Reid's personal PA. It is not meant to be a job with benefits and yet she finds herself in Alex' bed. Despite being smart, pretty, and slightly overweight, she doesn't believe she's attractive enough for a man like Alex.

Trying to manage work and put as much time into her sister's wedding, Jamie finds herself trying to please everyone. Her sister's wedding is at the foreground of the family's attention. Jamie would be fine if her sister wasn't so bossy, if her mother would stop nagging and her awful ex-boyfriend wasn't about to become her brother-in-law.

Jamie has to learn to love herself again, speak up for herself and have the confidence to go after what she wants. She also needs to prove to Alex that she's perfect for her job and for his bed.

Book 3 Who's the Boss Now

How close can you get to the fire and not get burned?

Landing the dream job, working and dating her incredibly hot boss and at the same time gaining the confidence she never had, Jamie doesn't think live could get any better.

She's helping to manage a multi-billion dollar company. Her family issues seemed to be resolved and even though she and Alex have to figure out the wrinkles, it looks like they'll be able to be professional at work and romantic after.

Except perfect isn't quite exactly how Jamie imagined it would be.


Managing the Bosses Series:
The Boss
The Boss Too
Who's the Boss Now
Gift for the Boss *Christmas Novella*
Love the Boss
I Do the Boss
Wife of the Boss
Employed by the Boss
Brother to the Boss
Senior Advisor to the Boss
Forever the Boss
Christmas with the Boss
NOW COMING:
Billionaire in Control
Billionaire Makes Millions
Billionaire at Work
Precious Little Thing
Priceless Love

Gea
3,0 van 5 sterren Good but a bit long
28 februari 2017
Indeling: Kindle-editieGeverifieerde aankoop
I enjoyed reading the three books but think the story is too stretched out.
After the third book I expected the HEA, and really think it would be best if it were a trilogy.
Instead we get more mysteries.
Is Paul the one seeing Annette or has Charlene or Mark a very jealous streak?
Or even Stephen, he seems capable of doing something really vicious for revenge.
Well, too many questionable types for me at the end of book 3 so I don't think I will read the rest.
I read in another review that there might be 7 or 8? Really?

L Miller
3,0 van 5 sterren A bit strung out
22 september 2016 - Gepubliceerd op Amazon.com
Indeling: Kindle-editieGeverifieerde aankoop
I once gave my mom a disc of her favorite opera singer. She loved. Then she played it. All 22 songs. Then she didn't like it as much. This 3 book series is a bit like that. I had read the first book before, so I skipped it and read the other two. I was expecting stories of other bosses. Nope this was 3 stories about the same characters. Will they or won't they get it together? Possibly. In book 5 or 6. Their we're on, we're off relationship gets tedious, at points. He's a major alpha male who can't commit. She's sure he could never really love a chubby wall flower. Both come from less than ideal families. Do they change? No over much. She puts up with way too much stuff. Makes you want to shake her and say, "Grow a back bone, will ya'?!" Do I want to read the rest of the series? Nit as o much
Meer lezen
91 mensen vonden dit nuttig
Vertaal recensie in het Nederlands

rfran0215
2,0 van 5 sterren What a Disappointment!
23 september 2016 - Gepubliceerd op Amazon.com
Indeling: Kindle-editieGeverifieerde aankoop
I was very disappointed when I started reading and found the main character to have a foul mouth right from the start. However, I had ordered the book and decided to try to read it. I was shocked at the end of the last chapter of the first book to find that although the story wasn't finished, the book was. The boxed set of three books aren't three different books, they are really one book chopped up to look like three books. Each book picks up from where the previous book stops. I would say "ends" but none of the books really end. They should say, "to be continued." Both main characters say they need to stay away from each other, but they hook up, distance themselves, hook up and distance themselves. It became pretty redundant. I don't like crass language and there was a lot of it. Overall, if you want a series of books that reads like a never ending TV soap opera, these books are for you.
Meer lezen
63 mensen vonden dit nuttig
Vertaal recensie in het Nederlands

ann pittack
1,0 van 5 sterren Disappointing
23 september 2016 - Gepubliceerd op Amazon.com
Indeling: Kindle-editieGeverifieerde aankoop
I read the whole book but was very disappointed. No matter what they said, this is not a love story. Jamie is way too wimpy, she should have dumped Alex early on, she just let him use her as his punching bag. Alex is too moody to be a good hero. He treats her like dirt, begs forgiveness, has sex and then treats her like dirt again. How many times can a girl put up with that? Not love, lust, that's all they have. The author should learn how to have her charectors talk to each other, not just use vulgar language constantly, then try to make it sound like love.
Meer lezen
38 mensen vonden dit nuttig
Vertaal recensie in het Nederlands

singNJ
1,0 van 5 sterren Preview promising, the rest needs work
28 mei 2017 - Gepubliceerd op Amazon.com
Indeling: Kindle-editieGeverifieerde aankoop
I've read this author before, and didn't enjoy it, but after the preview I was sucked in and decided to give this series a shot. I don't know what happened, but the writing completely changed from the well-edited and consistent preview to the actually book. From serious changes in characterization, to plot gaps, stilted and repetitive conversation, and a complete lack of flow in the plot development, this book is a mess. Overall, it felt like a promising first draft that needed significant editing and proofreading. During that, a ton of superfluous material would need to be cut, probably resulting in a cut from three books to two, or preferably one. That would have the added benefit of eliminating the completely arbitrary delineation of three books through one story which doesn't have natural breaks. I will honestly say I only got through the first book in its entirely, skimmed most of the second and completely avoided the third. But I think that was giving it more than its fair chance.
Meer lezen
20 mensen vonden dit nuttig
Vertaal recensie in het Nederlands

GrizzlyWife
3,0 van 5 sterren It's the Writing, Not the Reader
24 augustus 2017 - Gepubliceerd op Amazon.com
Indeling: Kindle-editieGeverifieerde aankoop
I received a free copy of this book or else I would have given it a pass due to Jamie, the erstwhile heroine. Typical curvy woman has low self esteem until she meets Alex in the most humiliating way. Stephen is Jamie's ex and is marring her sister. Stephen is a nasty vulgar person who is adore by most of Jamie's sister and mother. They hate Jamie - that is the only way to describe it. As the story continues we see Alex as billionaire who doesn't need to be a jerk in order to prove who's in charge. Jamie at first responds positively to the job she does to Alex then their relationship become personal. Then Ms. Timms cuts the brains out of Jamie who starts to give into her own insecurities and listens to the guilt trips her enemies (her mother & sister) put her on. In the real world a smart man will leave in the middle of the night never to be heard from again, but since Alex is a well written tarnished knight in shining armor he sticks the relationship out. Or he likes paying for other people's sins. Ms. Timms frankly cheated Alex and Jamie of a good story. Ms. Timms apparently drags out the story to several more books which isn't cool. The characters only have superficial growth.
Meer lezen
6 mensen vonden dit nuttig
Vertaal recensie in het Nederlands
Ga naar Amazon.com om alle 298 recensies te bekijken 4,1 van 5 sterren
Terug naar boven
Over ons
Verkoop bij ons
We helpen je graag
© 1996-2020, Amazon.com, Inc. en dochterondernemingen