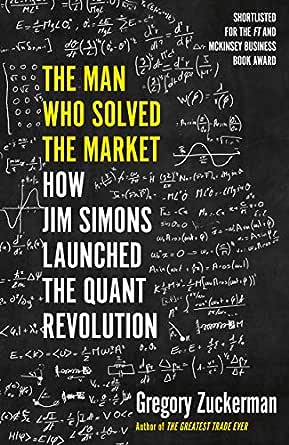 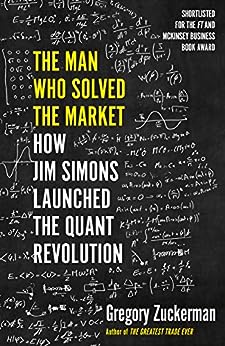 The Man Who Solved the Market: How Jim Simons Launched the Quant Revolution SHORTLISTED FOR THE FT & MCKINSEY BUSINESS BOOK OF THE YEAR AWARD 2019 (English Edition) Kindle-editie

'Reads more like a delicious page-turning novel...Put it on your holiday gift list for your favourite hedge-fund honcho' Bloomberg

Jim Simons is the greatest moneymaker in modern financial history. His record bests those of legendary investors, including Warren Buffett, George Soros and Ray Dalio. Yet Simons and his strategies are shrouded in mystery. The financial industry has long craved a look inside Simons's secretive hedge fund, Renaissance Technologies and veteran Wall Street Journal reporter Gregory Zuckerman delivers the goods.

After a legendary career as a mathematician and a stint breaking Soviet codes, Simons set out to conquer financial markets with a radical approach. Simons hired physicists, mathematicians and computer scientists - most of whom knew little about finance - to amass piles of data and build algorithms hunting for the deeply hidden patterns in global markets. Experts scoffed, but Simons and his colleagues became some of the richest in the world, their strategy of creating mathematical models and crunching data embraced by almost every industry today.

As Renaissance became a major player in the financial world, its executives began exerting influence on other areas. Simons became a major force in scientific research, education and Democratic politics, funding Hilary Clinton's presidential campaign. While senior executive Robert Mercer is more responsible than anyone else for the Trump presidency - he placed Steve Bannon in the campaign, funded Trump's victorious 2016 effort and backed alt-right publication Breitbart. Mercer also impacted the success of the Brexit campaign as he made significant investments in Cambridge Anatlytica. For all his prescience, Simons failed to anticipate how Mercer's activity would impact his firm and the world.

In this fast-paced narrative, Zuckerman examines how Simons launched a quantitative revolution on Wall Street, and reveals the impact that Simons, the quiet billionaire king of the quants, has had on worlds well beyond finance.

Alex Giryavets
1,0 van 5 sterren Will only recommend to trading professionals.
7 november 2019 - Gepubliceerd op Amazon.com
I listened to this new Gregory Zuckerman book and it was as I thought it would be, relatively low quality prose and mixed narrative with some history on how RenTech made and didn't make money since 1977, perhaps more history and details one would expect given NDAs. As anybody who is in the weeds knows, RenTech success at scale is driven by very good implementation of equities statistical arbitrage supplemented with bank assisted dramatic leverage and tax strategies (you won't get much details on it from the book) which came to RenTech the same way it came to all others (DE shaw, Thorp, PDT, and 100 of spin-offs) via MS original source. Given a cast of disgruntled former employees and RenTech PR appear to be the primary sources for the book, and author inability to dig dipper, the narrative is very uneven, but the book does reflect the messy story of RenTech in the early days and greed driven gyrations in the latter days well enough, I suppose. I would not recommend paper version of the book as it is thin on valuable content, but audio version is good enough to listen while commuting if you want to get some reaffirmation of how the trading world really works. I am afraid separating the wheat from the chaff might be a bit complicated for non trading professional so I would not recommend this book to them.
Meer lezen
137 mensen vonden dit nuttig
Vertaal recensie in het Nederlands

Trey Shipp
5,0 van 5 sterren A riveting story of a mathematician who learned how to build a team
5 november 2019 - Gepubliceerd op Amazon.com
Geverifieerde aankoop
A completely engrossing book you will find hard to put down. Jim Simons used applied math to create the greatest money-making machine in Wall Street history. But this is really a rich human story of how Simons built a team of brilliant and fascinating personalities.

• Simons is a true mathematician. He loves the elegance of math, the way theorems reveal truth, bringing order to chaos. When he was thirty-seven, he was awarded the top prize in geometry for his academic work.

• In 1964 Simons left his teaching job at Harvard to break codes for the Institute for Defense Analyses. His experience there was KEY to his later success. First, his approach to investing would be like that for code-breaking: apply math to find hidden structure in chaotic data. Second, he was impressed with the way the Institute hired people. It didn’t look to fill specific skills; it looked for the smartest and most creative people it could find.

• After code-breaking, Simons was hired to lead the struggling SUNY Stony Brook math department. In that job, he learned how to recruit and motivate superstar math professors. By the time he left academia to take on the challenge of investing, he had built a powerhouse department. And some of that talent would later join him and earn millions.

• Simons didn’t allow researchers to work in silos. There was one combined trading system, and everyone could see the code. Simons thought it was vital for scientists to interact, debate, and share ideas.

• Renaissance Technologies was not an overnight success. It took Simons ten years to put together the team and process that would go on to make so much money.

• By 2002 the Medallion Fund was so successful that Simons, concerned that performance would fall if the fund grew too big, raised investor fees to 44% of profits.

You don’t need to be a mathematician to read this book. It is simply a good tale. There are no formulas. And along with the story about Jim Simons, Zuckerman tells the history of the radical change in the investment world: “MBAs once scoffed at the thought of relying on a scientific and systematic approach to investing, confident they could hire coders if they were ever needed. Today, coders say the same thing about MBAs, if they think about them at all.”

Pam
3,0 van 5 sterren Very Meh
13 november 2019 - Gepubliceerd op Amazon.com
Geverifieerde aankoop
Its a cute story. It's by no means a definitive work on finance (as the authors friend suggests), I dont even think its a definitive work on RenTech. It became very obvious early on that the author got nothing out of his subjects so he weaved what sparse details he got with an abundance of prose. And you've got to be kidding my with the corn cliff hangers at the end of every chapter - 'but it would be worse then anyone feared...' - give me a break
Meer lezen
56 mensen vonden dit nuttig
Vertaal recensie in het Nederlands

Bart Stuck
5,0 van 5 sterren World Class Manager Puts the Mathematical Physics Team Together to Mine the Market
8 november 2019 - Gepubliceerd op Amazon.com
Geverifieerde aankoop
James Simons is a great manager: time and again when he recognized problems were at hand in his business, he acted to fix them constructively. He did this by recruiting arguably the strongest mathematical physics team on planet earth, knowing that you can teach finance but you cannot teach smart. The talent is world class: I heard Elwyn Berlekamp lecture on algebraic coding theory once, John Kelly (Kelly criterion for investing) who recruited my colleague Ed Arthurs to Bell Labs, David Donohue lecture on mathematical statistics, I am a colleague from Bell Labs with Peter Weinberger. Simons himself is a world class mathematician in pure mathematics but was open to working with all who could contribute based on intelligence, which led to recruiting Mercer and Brown from IBM in speech research. The ability to recognize problems, deal with them constructively, and move on, is the trait of a great manager who also contributed technically but most of all provided the funding and verbal encouragement time and again to find patterns in data that others missed, and then exploit it. The decision to always hire to raise the average IQ is not the norm, but for Simons it was. Renaissance is an example of the following adage: first they ignore you, then they scoff at what you are doing, then they claim they did it first. Renaissance was an idea whose time had come.
Meer lezen
43 mensen vonden dit nuttig
Vertaal recensie in het Nederlands

femiz
5,0 van 5 sterren Demystifying book about one of the biggest black boxes of financial markets
10 november 2019 - Gepubliceerd op Amazon.com
Geverifieerde aankoop
+ delves deep into Jim Simons professional and personal struggles
+ fascinating tale about how quants think and build their models, emphasizing how difficult is to make money on the markets