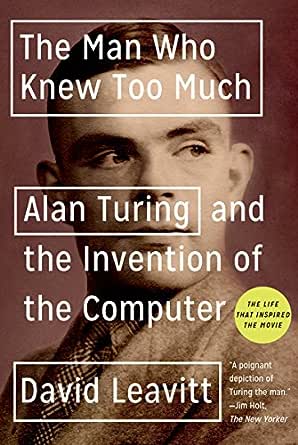 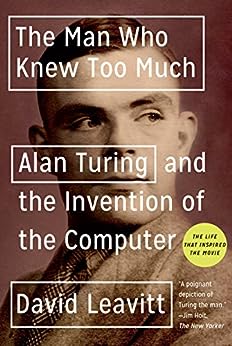 The Man Who Knew Too Much: Alan Turing and the Invention of the Computer (Great Discoveries) (English Edition) Kindle-editie

David Leavitt is the author of novels including The Body of Jonah Boyd and The Two Hotel Francforts, as well as story collections. The New York Public Library honored him as a Literary Lion. He teaches creative writing at the University of Florida, Gainesville, where he lives.

With lyrical prose and great compassion, Leavitt has produced a simple book about a complex man involved in an almost unfathomable task that is accessible to any reader.

Applewhite Minyard
2,0 van 5 sterren More of the man behind the math needed
27 februari 2017 - Gepubliceerd op Amazon.com
Geverifieerde aankoop
A little too complicated on the math side. I know Turing was a mathematician, and his contributions were certainly astounding, but I was expecting more on Turing himself and the struggles he went through to be accepted, to overcome the prejudice against him and the penalties that were exacted against him due to his homosexuality, and some more insights into the man behind the math instead of the math itself, which I thought should have been subservient to the personal issues instead of the main focus. I was interested in the math as related to the unique constraints and equally distinct methods for solving this dilemma, and the subsequent effects Turning's innovations created, like the Turing test for artificial intelligence and the emergence of thinking machines, not necessarily the calculations he made.
Too much math, too little man behind the math.
Meer lezen
4 mensen vonden dit nuttig
Vertaal recensie in het Nederlands

jay pister
5,0 van 5 sterren Underrated Glory
12 augustus 2017 - Gepubliceerd op Amazon.com
Geverifieerde aankoop
The acceptance of the man Alan Turing , and fully acknowledging his contribution to the world is barely understood as the general knowledge of The value of what he had done is so difficult to grasp. Considering the battles that had hinged upon the intelligence provided by Ultra, an analyst can reasonably conclude that this was the biggest story of the war, Without having won Stalingrad, the landings of Normandy and the battle of the Ardennes, the war could easily have been lost !!! Few persons have accurately been able to convey what it would have been like to have had the Allies lose World War 2 !!! The fact that he was a homosexual , and was so wrongly persecuted should factor into our modern thinking where "Don't ask...don't tell " was the best policy for any and all sexual preferences. Between Alan Turing , breaking the Enigma codes, and Werner Heisenberg , who purposefully sabotaged the German atom bomb effort, they are the two big heroes of the war . The world owes both a tremendous debt of gratitude. It should also be noted that the military edge in the Cold War, was owed more to our grasp of computer technology and coordinated systems that his intelligence and further development of his ideas, had provided the West with, was also a contribution that is underrated. .
Meer lezen
Vertaal recensie in het Nederlands

Dave of Nashua
3,0 van 5 sterren Great story but not what I expected
23 juni 2014 - Gepubliceerd op Amazon.com
Geverifieerde aankoop
If the title "The Man Who Saved England" were to be applied to anyone of the World War II period, Alan Turing and Winston Churchill would be the most likely candidates. But whereas Churchill operated in the public eye and was a bigger than life character, either revered or reviled by the public and his colleagues in government, the very nature of Turning's most important work, arcane, esoteric and shrouded by the Official Secrets Act, plus his low-key personal style, combined to condemn him to virtual anonymity.

Turing's best-known accomplishments, his work in code breaking and in developing the computer, were not as dramatically presented in this book as I would have liked. I was hoping for the book to promote Turing; to bring him forward and upward into the limelight. Instead it leads the reader down into the minutiae of Turning's mathematics and his homosexuality. Consequently the co-tragedies of his persecution and suicide, the ultimate irony of a society killing the man who saved it, were not as strongly or as dramatically presented as they might have been.

In fairness to the author, Mr. Leavitt probably told Alan Turing's story as Mr. Turing would have told it, himself. Rather than writing the promotional piece for Turning that I expected and wanted, Mr. Leavitt emphasized the mathematical challenges, achievements and social forces that shaped this brilliant man. Someone picking up this book to read about a mathematician and his work should find great interest in the details, the very details that for me were more of a distraction.
Meer lezen
5 mensen vonden dit nuttig
Vertaal recensie in het Nederlands