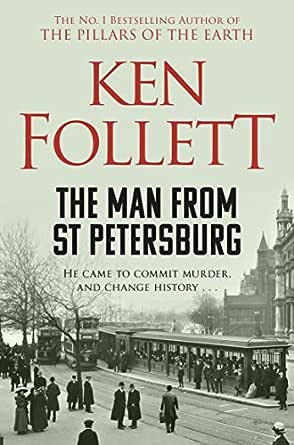 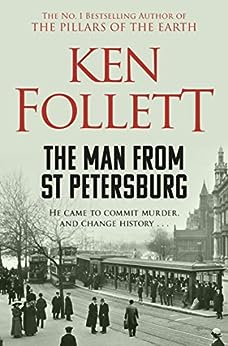 The Man From St Petersburg is a dark tale of family secrets and political consequences. Ken Follett's masterful storytelling brings to life the danger of a world on the brink of war.

A Secret Negotiation
1914. Tensions are rising as Europe finds itself caught in a web of alliances and dangerous warmongering. To help tip the balance in their favour Britain aims to draw Russia into an alliance with them instead of Germany. Czar Nicholas’s nephew, Prince Aleksei, is sent to London for secret naval talks with Lord Walden.

A Play for Power
Walden has a personal connection to Aleksei; his wife Lydia, is Aleksei’s aunt. But they are not the only ones interested in his arrival, including Walden’s daughter Charlotte, wilful, idealistic and with an awakening social conscience, Basil Thompson, head of Special Branch, and Felix Kschessinky, a ruthless Russian anarchist.

A World at War
With the British desperately needing a signed treaty and the fate of the world hanging in the balance, the destinies of these characters become inextricably linked as the final private tragedy which threatens to shatter the Waldens’ complacency is acted out.

Peter W.
5,0 van 5 sterren One of my FAVORITE books from Ken Follett!!
28 maart 2017 - Gepubliceerd op Amazon.com
Geverifieerde aankoop
Follett - somehow - manages to combine history from the onset of WW-I with detailed, realistically portrayed interactions between a "noble" British family and a Russian anarchist intent on assassinating a member of the Russian nobility - who is their nephew/cousin and a house guest. His intent is to derail a pact between Russia and Britain and - he hopes - start a revolution in Russia.

The book starts a little bit slowly - but one becomes "interested" in the characters and what makes them tick - - and, WOW!, does one find out!!
I - quite literally - could not stop reading the last 20-25% of the book! Read way past my normal "bed time" and will pay for it later today - - but it was worth it. The last chapter requires a little "suspension of disbelief" - - but not much and the novel is brought to a satisfying conclusion - but I will not say for whom. The Epilogue wraps things up even more satisfyingly.

Michael E
2,0 van 5 sterren One of Follett's Worst -- Go Elsewhere
1 maart 2017 - Gepubliceerd op Amazon.com
Geverifieerde aankoop
I have loved many of Ken Follett's books but I was very disappointed in this "historical" novel. Very predictable plot, very poorly developed characters -- talk about one-dimensional and stereo-typical characterizations. After an interesting beginning this really got maudlin. The Russian unemotional anarchist whose heart melts just as you expect it, the well meaning and ultimately kind, English Lord and the idiotic female characters. I realize that authors take liberties and it is fiction, but please, some consistency or at least a semblance of reality in your characters. I only finished this book because once I start to read a book I do want to finish it. I wonder if Follett just cut and pasted some of his out-takes and grafted them on this historical time at the beginning of WWI. Several
Meer lezen
19 mensen vonden dit nuttig
Vertaal recensie in het Nederlands

Tony Killinger
4,0 van 5 sterren Nobody writes historical novels like Ken Follett
5 november 2016 - Gepubliceerd op Amazon.com
Geverifieerde aankoop
Nobody writes historical novels like Ken Follett. He mixes history, intrigue and sex in such exact proportions that most other writers can't get quite right. Some times the bad guys end up looking pretty good and the good guys don't have quite the shine they should have.
Meer lezen
26 mensen vonden dit nuttig
Vertaal recensie in het Nederlands

Lydia L. Jensen
4,0 van 5 sterren A Glimpse into History
27 juli 2017 - Gepubliceerd op Amazon.com
Geverifieerde aankoop
Quite an amazing rendition of the prelude to World War I. The author gives us a good view of the wealthy, the noble and the politically motivated characters in the story. Young Winston Chruchill is an interesting character in the story. The ending to the whole tale was expertly finished and made me wonder how much of the story was based on actual events, as it was all very realistically presented. Enjoyed the novel and, of course, always enjoy Ken Follet's work.
Meer lezen
8 mensen vonden dit nuttig
Vertaal recensie in het Nederlands

Kindle Customer
5,0 van 5 sterren Follett's Pre-Revolutionary Russian Spy Thriller
16 januari 2017 - Gepubliceerd op Amazon.com
Geverifieerde aankoop
Follett's second international best-seller was a resounding success but not the juggernaut blockbuster that Eye of the Needle had been four years previously. Nonetheless, it was good enough. This tale is set at the dawn of World War One, when the novel's antagonist/protagonist a Russian anarchist named Feliks Kschessinsky is determined to assassinate one Prince Aleksey Orlov, a Russian admiral who is for the purposes of the storyline a nephew of the real-life Tsar Nicolas II and the fictional Earl of Walden. The Earl's Russian wife the Countess Lydia had once had a premarital affair with Feliks, who was sent to Siberia for the the rest of his natural life while she was forced to make a pre-arranged match with the English nobleman. Feliks escaped from prison many years later, joins an anti-Monarchist anarchist group and makes his way to London when he learns that the young Admiral has brokered a deal to forge an alliance between Russia and Britain should Germany go to war. He also strikes up a friendship with Lydia's susceptible, innocent, but rebellious daughter Lady Charlotte, which is when the plot really gets going. This is a fast-paced story that will satisfy any bookworm although it lacks the spine-tingling suspense that heightened the drama in Eye of the Needle, still considered by many to be Follett's finest.
Meer lezen
10 mensen vonden dit nuttig
Vertaal recensie in het Nederlands
Ga naar Amazon.com om alle 757 recensies te bekijken 4,2 van 5 sterren
Terug naar boven
Over ons
Verkoop bij ons
We helpen je graag
© 1996-2020, Amazon.com, Inc. en dochterondernemingen