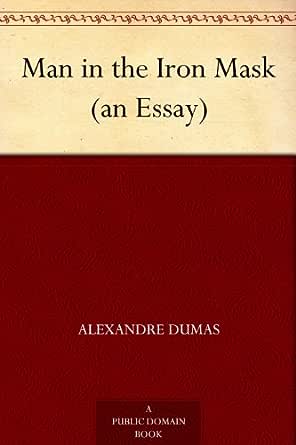 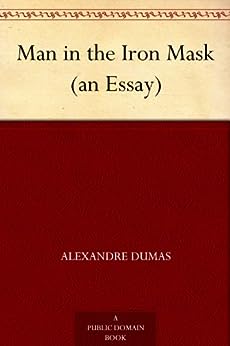 Man in the Iron Mask (an Essay) (English Edition) Kindle-editie

Misfit
5,0 van 5 sterren Forget the movie, read the book!!
12 juli 2007 - Gepubliceerd op Amazon.com
Geverifieerde aankoop
Oh wow, what a great end to an incredible ride, the story of the Musketeers. I haven't been so engrossed in a series of books since I picked up Diana Gabaldon's Outlander. Athos, Raoul, Porthos, Aramis and of course D'Artagnan are going to be in my thoughts and dreams for some time, I hate to let them go.

If you are expecting the story as told by Hollywood, forget it. While I haven't seen the latest version with Leonardo DiCaprio (forgive me if I spell it wrong), I looked at the reader reviews and was quite surprised at how different the book is from Hollywood's version. I also recall a movie done in the late 70's/80's that is nothing like the book as well. I would pick it apart point by point, but that would include spoilers. The Man in the Iron Mask is actually the last third of a huge novel by Dumas originally titled The Vicomte de Bragelonne. Because of the size of the book, English publishers have divided into three books, The Vicomte de Bragelonne (Oxford World's Classics),Louise de la Vallière (Oxford World's Classics), and The Man in the Iron Mask.

Suffice it to say that TMITIM is the final chapter of our heroic Musketeers, as well as Raoul, the son of Athos. While we all know the story of Louis XIV's twin and the plot to substitute him, that is a minor part of the whole story, as the action then becomes centered on the aftermath of that plot and Louis' revenge. It has been a grand, glorious ride reading this series, The Three Musketeers, Twenty Years After, The Vicomte de Bragelonne, Louise de la Valliere and The Man In the Iron Mask. And do have your box of tissue handy for the last 20-30 pages. You'll need it.

One side note, some people are purchasing this as a stand-alone book, which it is not. You could probably get away with that, but you'll spend so much time looking back at the footnotes trying to figure who is who I doubt you will enjoy the story as much. Also, this version didn't have the list of characters that the VDB and LDLV did. Go for broke and read the whole thing, it's well worth it.

da perfesser
2,0 van 5 sterren I really wanted to like this book ...
21 juni 2019 - Gepubliceerd op Amazon.com
Geverifieerde aankoop
I've read and enjoyed other works by Dumas, so it's not like the writing style threw me off. I wanted to like this book, but I just couldn't get into it. It didn't grab me like the Count of Monte Cristo does. This is not a literary review, just an account of my experience with it. Your mileage may vary.
Meer lezen
Vertaal recensie in het Nederlands

Paula Aranguren
5,0 van 5 sterren Details and descriptions are everything
15 januari 2013 - Gepubliceerd op Amazon.com
Geverifieerde aankoop
Throughout history families have been separated, destroyed, and betrayed among themselves in search of power. It is impressive to observe how this lust for supremacy leads the people, who are supposed to be there by one's side, to betray one. Inhumane, it is. How horrible to be betrayed and imprisoned, and not know why or whose fault. To helplessly scream "What have I done!?" while rotting in a particular version of hell. In Alexandre Dumas' last book, "The Man in the Iron Mask", a situation similar to this is portrayed. This story is about the conflicts King Louis XIII's death brought upon France, as he had two heirs. Twins. He had seen brothers destroy countries fighting for power so he lied to his whole family before he died and banished one of his sons. This novel is based on a legend. Part real, part fantasy; the real mystery is, however, we don't know which part is which.

"The Man in the Iron Mask" is actually the third part of Dumas' huge novel, titled "The Vicomte de Bragelonne."This novel was divided into "The Vicomte de Bragelonne", "Louise de la Valliere", and "The Man in the Iron Mask." Without having read the other two thirds of this extensive novel, the beginning of this book might be a bit confusing, however the thrill begins somewhere in the middle and is impossible to miss. The impression of the book most people have of this book is of a "jailbreak" story, based on it's title. This book, however, spawns from several historic facts: in 1661, Monsieur Fouquet, who worked for King Louis XVI was arrested for robbery. Also, in the same year, King Louis won over the heart of a young lady called Louise de la Valliere, fact which caused some fuss. In his story "The Man in the Iron Mask", Dumas transmits the undisclosed story behind these facts, which involves, of course, his Four Musketeers: Porthos, Athos, Aramis, and D'Artagnan. The story takes place when the four retired Musketeers are feeling a bit aged and have the strongest desire for adventure; a desire they fulfill all throughout the whole of the novel.

This book regards a mission. The mission the Musketeers Porthos, Athos, Aramis, and D' Artagnan had: to save an innocent man's life, and to consequently save France from a selfish, arrogant ruler. Two birds; only one shot. It begins with Aramis, now Bishop of Vanes visiting a mysterious prisoner in the Bastille, Philippe, as his confessor. Dumas communicates and details this scene impeccably: "Doubtless the scrutiny the prisoner had just made out of the cold, crafty, and imperious character stamped upon the features of the bishop of Vannes was little reassuring to one in his situation." Aramis sees that he has nothing to confess, for his only crime was being the King's twin brother. The prisoner did not even know his true identity, therefore, Aramis reveals it, along with the plan he has come up with, the plan that was to turn his life in-side out: to take him out and to give him what he is the rightful owner of by switching the lives of Louis and Philippe, to arrest the king and substitute him with his brother. The novel frames Aramis' fascinating and complex plot to make this work, as well as how the other Musketeers fit into it.

The Man in the Iron Mask is the name given to a prisoner arrested in France in about 1670 who was held in a number of jails, including the Bastille. No one ever saw his face. He died on 19 November 1703, during the rule of Louis XVI. The possible identity of this man has been thoroughly discussed and has been the topic of many books, for this masked, unidentified character has the power to automatically engage the reader with mystery and thirst for more.
Meer lezen
8 mensen vonden dit nuttig
Vertaal recensie in het Nederlands
Ga naar Amazon.com om alle 261 recensies te bekijken 4,2 van 5 sterren
Terug naar boven
Over ons
Verkoop bij ons
We helpen je graag
© 1996-2020, Amazon.com, Inc. en dochterondernemingen