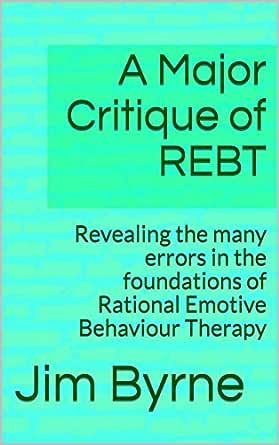 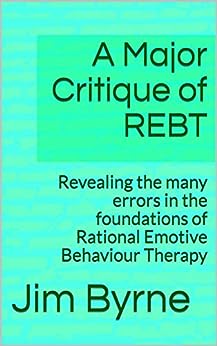 A Major Critique of REBT: Revealing the many errors in the foundations of Rational Emotive Behaviour Therapy (English Edition) Kindle-editie

This book was originally published, in 2017, with the title ‘Unfit for Therapeutic Purposes’; and is reissued in 2019 with a new title, plus an extensive new Preface, which outlines the bottom line of Dr Byrne’s critique of REBT.The text contains a summarized account of the author’s journey through Rational Emotive Behaviour Therapy (REBT) – from beginning to end. He began, in 1992, as a fanatical supporter of REBT, which is the original form of Cognitive Behavioural Therapy (CBT).Then, while trying to rescue REBT from two critics (Bond and Dryden, 1996), in the period 2001-2003, he accidentally uncovered several flaws in the foundations of this theory of therapy. Next, he wrote a series of papers, exploring some of the weaknesses of REBT – all the time hoping he would be able to salvage a defensible core of the therapy. But eventually, this led him to the development of a completely new theory of therapy, which rejects virtually all of the major theoretical and practical elements of REBT – apart from those moderate Stoical and moderate Buddhist influences that went into the origin of Dr Albert Ellis’s theory. (See Byrne 2013 and 2016a).The intellectual journey described in this book took twenty-five years to complete. The whole of Part 1 was written in 2017. This is a critique of the fundamental flaws in REBT (and in all forms of CBT which are based on the ABC model; and in much of extreme Stoicism and extreme Buddhism).But most of Part 2 – which contains the historical documents - was written between 2009 and 2012, apart from the Introduction to Part 2 and the Reflections upon those historical documents, which were both written in 2017. And Chapter 7 which was written in 2003. Although this book is a critique of Rational Emotive Behaviour Therapy (sometimes called Rational Emotive & Cognitive Behavioural Therapy), some of the key criticisms apply just as much to all forms of Cognitive Behavioural Therapy (CBT) which utilize the ABC model (which includes Beck [1976] and Burns [1990]); and which subscribe to a famous (or infamous) statement from Epictetus to the effect that “...humans are not disturbed by what happens to them”. (Epictetus was a first century CE slave, of Greek origin, who grew up in slavery in Rome, and gained his freedom because of his learning of philosophy. [Irvine, 2009; and Epictetus, 1991]).This book was originally published with the title, Unfit for Therapeutic Purposes, in 2017. It is reissued in 2019, with an extensive new Preface, which outlines the bottom line of Dr Byrne's critique.
click to open popover