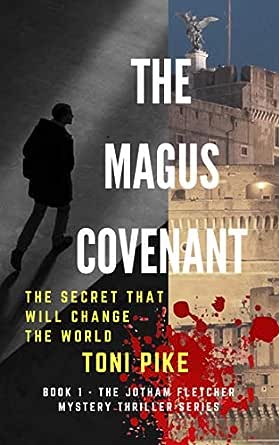 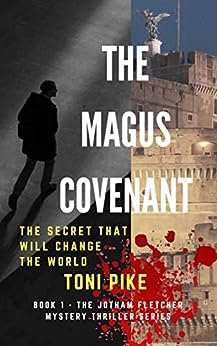 The Magus Covenant: The secret that will change the world (The Jotham Fletcher Mystery Thriller Series Book 1) (English Edition) Kindle-editie

“A thriller that will leave you breathless!”

THE WORLD AS WE KNOW IT IS IN PERIL – UNLESS ONE MAN CAN UNCOVER THE TRUTH...

A long-forgotten sect, a deadly brotherhood, a billionaire who trades in relics and a race across Europe in pursuit of a killer.

Jotham Fletcher is in Rome to give a lecture about Simon Magus at the church where he fell to his death beside the Roman Forum. Magus was a cult leader mentioned in the Bible and his libertine sect disappeared by 400 AD.

But did it really die out?

A robed man is pushed from the bell tower of the church at midnight and Jotham becomes the prime suspect. His lover Antonella, an expert on ancient documents, has a shocking secret. Rumours fly about a papyrus scroll. A ruthless Catholic Brotherhood will stop at nothing in their hunt for a hidden sect. And a reclusive billionaire has the chance of a lifetime to get his revenge.

Jotham is kidnapped, tortured and on the run. He races from Italy to England to Sweden. But the body count continues to rise and so does the heat in this non-stop thriller that will leave you breathless.

Don't miss this action-packed thriller! Discover the secret that will change the world.

There are three other books in this series - enjoy Jotham Fletcher’s continuing story.
Book 2: THE ROCK OF MAGUS – Code Red in the Vatican
Book 3: THE MAGUS EPIPHANY – Ancient treasures and a new revelation
Book 4: HOLY SPEAR OF MAGUS – The covenant will be fulfilled

Uma Iyer Van Roosenbeek
5,0 van 5 sterren Hair-raising magnificent thriler!
13 oktober 2016 - Gepubliceerd op Amazon.com
Geverifieerde aankoop
A beautiful edge of the seat thriller based on Simon the Magician or Simon Magus mentioned in various places in the Bible. The way the story is woven, the characters developed, the twists and turns that the plot develops as it moves along makes the book alluring, fascinating and irresistible. The revelation at the end takes the reader by total surprise and makes this book a topnotch one! One gets enthralled as one goes through each page! I thoroughly enjoyed this book and look forward to reading Toni's other book too!
Meer lezen
2 mensen vonden dit nuttig
Vertaal recensie in het Nederlands

Michael R. Slezak
5,0 van 5 sterren Fantastic adventure/thriller with the perfect mix of religion and historical facts!
31 juli 2019 - Gepubliceerd op Amazon.com
Geverifieerde aankoop
Tonight presents a very plausible storyline that is a great mix of historical facts and creativity on her part. The action is nonstop with many plot twists to keep a firm grip on your attention. Been years since I enjoyed a novel of this magnitude in this genre.
I proudly award this work 5 Stars!

Sarah Sheler
4,0 van 5 sterren Finishes strong
13 april 2017 - Gepubliceerd op Amazon.com
Geverifieerde aankoop
This book starts a little slow for me but it finishes with a bang. Through several unexpected twist and turns we arrive at the truth.
Meer lezen
Vertaal recensie in het Nederlands

Leigh Lofgren
5,0 van 5 sterren Great book
6 februari 2016 - Gepubliceerd op Amazon.com
Geverifieerde aankoop
I really enjoyed this book and it grabbed me from the very beginning. Good characters, good story that went a good pace and definitely enjoyed reading this book and would recommend it to all.
Enjoy and look forward to more from the Aussie minister!