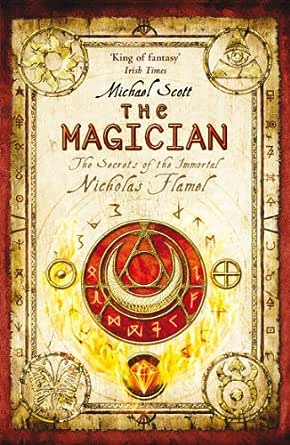 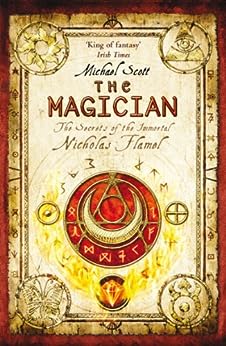 The Magician: Book 2 (The Secrets of the Immortal Nicholas Flamel) (English Edition) Kindle-editie

Praise for The Secrets of the Immortal Nicholas Flamel series:
A New York Times Bestselling Series
A USA Today Bestseller
A Kids' Indie Next List Selection
A New York Public Library Book for the Teen Age
An ILA Young Adult Choice Book
An ILA Children's Choice Winner "The Secrets of the Immortal Nicholas Flamel has everything you loved about Harry Potter, including magic, mystery, and a constant battle of good versus evil."--Bustle

★ "[A] riveting fantasy . . . fabulous read." --School Library Journal, Starred ★ "Readers will be swept up." --Kirkus Reviews, Starred "Fans of adventure fantasies like Rick Riordan's Percy Jackson and the Olympians series will eat this one up." --VOYA "An exciting and impeccably thought-out fantasy, well-suited for those left in the lurch by Harry Potter's recent exeunt." --Booklist

Ashes to ashes . . .
California: The book of Abraham the Mage holds the secret of eternal life - a secret more dangerous than any one man should possess. Dr. John Dee is two pages away from the knowledge that would bring the Dark Elders into ultimate power - and could mean the destruction of the world as we know it.
Two people stand in his way: Josh and Sophie Newman.
Paris: Time is running out for Nicholas Flamel and his wife Perenelle. Every day they spend without the book, they age one year: their magic becomes weaker and their bodies more frail. Niccolo Machiavelli, immortal author and celebrated art collector, works for Dee and is in hot pursuit of them - Flamel knows there's no time to lose and Sophie must learn about Fire Magic...
Josh and Sophie are the world's only hope. If they don't turn on each other first.

C. St John
5,0 van 5 sterren The best series of books I've read! go for it!
21 september 2016 - Gepubliceerd op Amazon.com
Geverifieerde aankoop
The Magician is just one book of this remarkable series of books, and it is better to comment on the whole series as I just finished reading them all, back to back. I'm 76, been reading sci fi and fantasy since I was 12 or so, that is a slew of books. And that includes all the recent series of books that have been published as "young adult" literature, and I have found them all entertaining reading. And, I have to put this series by Michael Scott at the top of the list, more interesting characters, more twists and turns and surprize in the plot that you can imagine, and not a dull moment through the whole series. I really recommend them if you have any taste at all for this kind of literature. Just give yourself some space to read, once you start, it is very difficult to stop. Enjoy!
Meer lezen
8 mensen vonden dit nuttig
Vertaal recensie in het Nederlands

G. King
1,0 van 5 sterren Total Nonsense from Start to Finish
20 februari 2019 - Gepubliceerd op Amazon.com
Geverifieerde aankoop
The author just took a box and tossed in all of the names he could think of out of Greek and Roman mythology and threw in a few from other cultures as well. Then he threw in a few other random names like Shakespeare and Billy the Kid. He obviously then just randomly made up a few more names and then jumbled them together and drew them out to form this nonsense series. I kept reading it mostly out of astonishment than entertainment. At the end, I almost threw my iPad at the wall when he ripped off Oppenheimer/Bhagavad Gita with the "I am the destroyer of worlds" quote. Seriously? This guy is a total hack and this book series is obviously just written for kids under the age of about 12 who have no reference in history or ... well, good writing. Just awful. I wish I could get my money back for this garbage.
Meer lezen
2 mensen vonden dit nuttig
Vertaal recensie in het Nederlands

moosie2797
4,0 van 5 sterren Enjoyable fast read
19 oktober 2011 - Gepubliceerd op Amazon.com
Geverifieerde aankoop
Though the book is super fast paced with so much going on with all the differant characters, book 1 and 2 are only in the spam of 6 days and a lot happens to all sides. I like how each chapter is from a differant point of view of the characters and each chapters ends in a mini cliff hanger. A huge amount of information was in troduced in both books but it is very easy to follow with very little confusion between each character. One thing that started to bother me was that several statements were repeated over and over by all the characters, some were very importand for the story like when either side was talking about the twins and the prophecy but there were other statemente that I felt were not that important to the whole story but it was clear the author just really like to repeat them, by the second book there was many times that both sides were thinking and saying the same thing word for word. I understand that both sides had the same goals, get the book, get the pages, save the twins, capture the twins ect but I felt it unnessecary for some comments to be repeated so much. The story is a very fast paced easy read but very enjoyable, I read the book in less than a day and looking forward to the 3rd book as soon as I can get it. But I do have to wonder with the book moving so fast, the first 2 books were only placed in a spam of 6 days and the main characters are on a time crunch of 30 days, of how much "filler" there will be to fill the series to 5 or 6 books. It did become very clear that the story could still be total completly in much fewer books. Maybe at some point the books with be combine like so many other books are doing now days. Book 1 and 2 could actually be one book.
Meer lezen
2 mensen vonden dit nuttig
Vertaal recensie in het Nederlands

Karen Keyte
5,0 van 5 sterren Fabulous Book, Fabulous Series
26 juni 2011 - Gepubliceerd op Amazon.com
Geverifieerde aankoop
"We are now in Paris, the city of my birth, the city where I first discovered the Codex and began the long quest to translate it. That journey ultimately led me to discover the existence of the Elder Race and revealed the mystery of the philosopher's stone and finally the secret of immortality. I love this city. It holds many secrets and is home to more than one human immortal and ancient Elder. Here, I will find a way to Awaken Josh's powers and continue Sophie's education. I must. For their sakes - and for the continuance of the human race." - from the Day Booke of Nicholas Flamel, Alchemyst

Two days have passed since fifteen-year-old twins Josh and Sophie Newman set off for their summer jobs on an ordinary Thursday. Just two days, but they have been the two most extraordinary days either twin will ever live - filled with danger and magic and mythical beings so unbelievable they stagger the mind. It started when a small, dapper man - the powerful human immortal Dr. John Dee, as it turns out - showed up at the bookstore where Josh worked. Before a quarter of an hour had passed, Dr. Dee had triumphed in a battle of magics with Josh's boss, Nick Fleming - who is, in reality, the immortal human Alchemyst Nicholas Flamel - completely destroyed the bookstore, kidnapped Nick's wife and stolen all but two pages of the Book of Abraham the Mage.

Also known as the Codex, Abraham's book is an ancient and dangerous book of spells, prophecies and magical formulae. Dr. Dee and the Dark Elders he serves wish to use the Codex to bring the Elder Race back to preeminence on the earth, making humanity slaves at best, a food supply at worst. Luckily, the two pages Josh managed to tear out of the book before Dee stole it are the two most vital to the Dark Elders. Without the spell of Final Summoning contained on those two pages, the Dark Elders' plans cannot go forward.

Convinced that Sophie and Josh are the twins of prophecy - those Abraham said would either save the world or destroy it - Nicholas Flamel has enlisted the aid and protection of the Warrior Maid, Scathach, as he seeks those who can Awaken the twins' powers and instruct them in the five elemental magics. Sophie was Awakened by Hekate in the Elder's California Shadow Realm, but unfortunately, Dee attacked before Josh could be Awakened. After visiting the Witch of Endor in Ojai (who taught Sophie the Magic of Air and also gave her the gift of all of her memories and knowledge) the beleaguered Nicholas, Scathach, Josh and Sophie have fled to Paris, the city of Flamel's birth and the home of Dr. Dee's dangerous ally, the human immortal Niccolo Machiavelli.

In just two days, it seems that Josh and Sophie have gone from being ordinary 21st century teens to having their life threatened by the unreal, the mythic and the impossible at every turn. Josh, for one, in not happy about the situation. Nicholas Flamel has repeatedly told the twins that they MUST trust him, that he is trying to protect them both, but Josh is not convinced that this is entirely true. He has witnessed Flamel putting his twin in great peril, he saw the Alchemyst risk Sophie's life at her Awakening with his own eyes. Frightened, angry, and feeling both isolated by and jealous of the changes in Sophie, Josh has decided to put his life in Flamel's hands for now, but he will not trust the man, not without knowing Flamel's full agenda.

While Nicholas, Scathach and the twins seek sanctuary with one of the Alchemyst's former students in Paris, Perenelle Flamel is facing her own difficulties on Alcatraz. Dr. Dee has filled the cells of the former penitentiary with the most horrible of monsters, all of whom are a great threat to humanity. Perenelle must find out why, even as she seeks to escape and rejoin Nicholas and the twins, but for The Sorceress, as for her husband, time is running out. Without the Codex to reveal to recipe for the potion of immortality, Nicholas and Perenelle will age at least a year with each passing day. Within a month, their many centuries will catch up to them and they will wither and die.

The breakneck adventure Michael Scott began in The Alchemyst continues here in The Magician. As before, Mr. Scott uses his incredible knowledge of folklore, mythology and history to populate the novel with a host of heroes, villains and beasts. The Comte de Saint-Germain, Niccolo Machiavelli and Jeanne D'Arc are all major players in this fascinating story. Varied mythical beasts and beings such as Aerop-Enap, Mars Ultor, the Valkyries and the Nidhogg all make appearances. In addition to his unparalleled grasp of the legends and histories of a myriad of cultures, Mr. Scott also uses an extensive knowledge of the settings, including Alcatraz Island and the Catacombs of Paris, to bring his story to vivid life. It's impossible to finish this book without wanting to begin The Sorceress, book three in the series, immediately and, if the successive novels in this series prove to be as wonderful as the first two, I have a feeling I'm going to devour them one after the other.