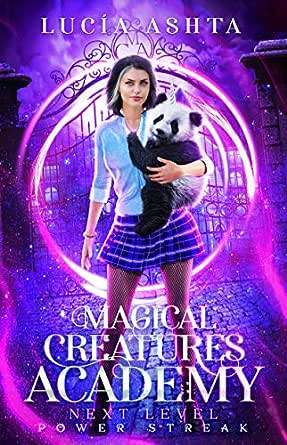 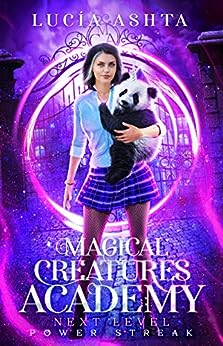 Jasmine has been around magic all her life. She knows the rules, and she loves to break them.

When she turned eighteen, her shifter powers manifested, just as she expected them to. When the Magical Creatures Academy invited her to attend the prestigious school, she wasn’t surprised. When she had a fling with a flirtatious fae over the summer, she thought nothing would come of it, especially as she’s had her eye on a mighty fine shifter at the academy.

But for once Jas is about to be shocked. The fae isn’t what he appeared to be, and neither is the amulet he left behind.

*** Jas will take you on a wild ride filled with loads of magic, sizzling adventure, sexy shifters and fae, and enough spunk to leave you wanting more.

*** Power Streak is best read as book 4 of the Magical Creatures Academy. However, Jas’ trilogy can also be read as a standalone series.

*** Jas embraces her wild side. This series is recommended for ages 16 and up due to language and sexual situations.

Kathy M.
5,0 van 5 sterren Love the story on Jas.
9 november 2019 - Gepubliceerd op Amazon.com
Geverifieerde aankoop
Jas stupidly picks up a magical object, think it's just an necklace. And to Jas anything she finds, she can keep. So she immediately puts it on. Weird stuff starts happening to her from then on. She can't get into the Academy, she has her hands get stuck to a machine that tests she is who she says she is. Then she randomly starts disappearing in class, only to reappear in the most random places. She saves a pandacorn (panda unicorn) & brings him back with her. He becomes so attached to her he won't let anyone else hold him. Jas discovers the Voices' hideout accidentally & ends up in a bad situation. She is able to call on her friends through the necklace. However, she soon learns the necklace isn't all good. It seems it somehow stold another students powers. And the student is slowly being drained of her powers & life force. Can the same happen to Jas? I forgot to mention that Jas finally gets her man, Ky. Ky finally decides her likes Jas enough to not care that his sister is Jas' friend. Oh, and just a heads up there is masturbation in this book.
Meer lezen
2 mensen vonden dit nuttig
Vertaal recensie in het Nederlands

Book-loving tea guzzler
5,0 van 5 sterren Now it’s time to hear from someone who tells it like it is.
27 december 2019 - Gepubliceerd op Amazon.com
Geverifieerde aankoop
I couldn’t be happier that the sassy skunk shifter got her own series! Jas was my favorite character in the original trilogy, and now we get to know her even better.

The story continues directly where the original trilogy left off, only from a different perspective. And it ties up a long-awaited loose end that I’m pretty sure all the readers have been wondering about: her interest in Ky!

I’d say the best part is by far the pandacorn, because, well, it’s a pandacorn. And he even has a purple mohawk. Who can compete with that?

Be ready for a serious cliffhanger at the end, so I’m definitely ready for the next book!

Miriam Løvdahl
5,0 van 5 sterren OMG!
29 oktober 2019 - Gepubliceerd op Amazon.com
Geverifieerde aankoop
I was sitting in public reading this. People was looking at me like I was crazy because I was laughing so much from some of the conversations Jas has. She is full of sass and snark, and really have a problem understanding when to let thing be 🤣 Love it!
Meer lezen
2 mensen vonden dit nuttig
Vertaal recensie in het Nederlands

A.Meyers
5,0 van 5 sterren What spunk!
26 oktober 2019 - Gepubliceerd op Amazon.com
Geverifieerde aankoop
Language, scenes and some serious drama. Reminded me of college. I'm still not sure why Jas is so feisty, but she definitely does not let up. And man, can that girl think on her feet! I look forward to seeing who's butt she kicks in book 2!
Meer lezen
Een iemand vond dit nuttig
Vertaal recensie in het Nederlands

Diane E. Goodman
3,0 van 5 sterren Not As As Good As Her Other Series !!!
2 november 2019 - Gepubliceerd op Amazon.com
Geverifieerde aankoop
I really wanted to Love this Addition to the Magical Academy Series, This book felt rushed and Jas has lost lost what made her special in the other books. She was so fixated on getting busy and it ruined the series for me. The addition of the characters from the SirAngel Series added to my confusion. The only characters that I enjoyed catching up with the always hysterical bunny mommy Roberta.
Meer lezen
Vertaal recensie in het Nederlands
Ga naar Amazon.com om alle 55 recensies te bekijken 4,7 van 5 sterren
Terug naar boven
Over ons
Verkoop bij ons
We helpen je graag
© 1996-2020, Amazon.com, Inc. en dochterondernemingen