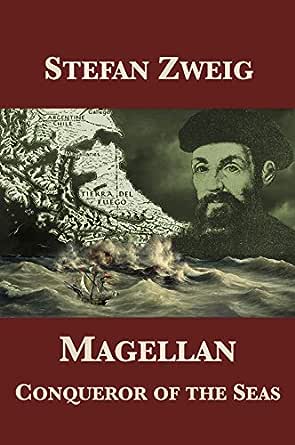 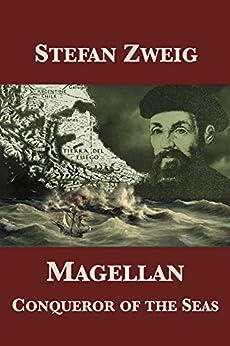 Portuguese explorer Ferdinand Magellan (1480-1521), the first to circumnavigate the globe, sailed on behalf of the Spanish monarch from the Atlantic to the Pacific Ocean, and discovered the straights that now bear his name and the Philippines.

“Magellan is written in a tone of astonished wonder... a persuasive and crisp portrait of Magellan... Stefan Zweig brings the story of Magellan to life.” — Charles Poore, The New York Times

“[A]n extremely well-written narrative, fired by a keen sense of justice, and with its dramatic and emotional qualities well sustained... [Zweig’s] own passion for his subject carries the story well.” — R. L. Duffus, The New York Times

“A superb piece of reconstruction, intensely interesting first as a record of one of the greatest achievements in human history, and second, as a live picture of a tragic figure, Magellan, lonely and misunderstood and cheated at the end of the reward in recognition of the stupendous and courageous task he had envisioned and achieved. Fascinating reading, and enlightening as a minutely detailed picture of the problems faced and met, from the first step to the last. A book which will last...” — Kirkus Review

“Zweig’s story opens with a fascinating chapter on spices. He explains the reasons for Magellan’s sailing under a Spanish flag after a youth spent in the service of Portugal. Such matters as the making of Magellan’s will, the absurd circumstances of his death, the reception of the 18 who returned, the corruption at court, are told in the light of present-day psychology and with an understanding of human nature that makes this tale of an adventurer excellent and provocative reading.” — The English Journal

“Zweig’s accumulated historical and cultural studies, whether in essay or monograph form, remain a body of achievement almost too impressive to take in... Full-sized books on Marie-Antoinette, Mary Stuart, and Magellan were international best sellers.” — Clive James, Cultural Amnesia
click to open popover

Stella
5,0 van 5 sterren real good book
21 augustus 2019 - Gepubliceerd op Amazon.com
Geverifieerde aankoop
Enjoyed the book a lot and learned a lot from it. In history classes we get a summary of events, but this book transports us back in time and takes us through many important details giving the events a whole new perspective. All in all, monarchs and governments were good at coating greed for riches and power in ideology, nationalism, religion etc. in order to draft the people to give their life for a "high cause". Nothing changed, the same is true today. Stefan Zweig is very good at pointing out all the details without blemishing the story and making it sound didactic.
Meer lezen
2 mensen vonden dit nuttig
Vertaal recensie in het Nederlands

RadX
5,0 van 5 sterren The best biography of the Great Explorer
3 november 2018 - Gepubliceerd op Amazon.com
Geverifieerde aankoop
I've read this book several times in the past. Now we decided to have one in our home library. A very good storyteller wrote this book many years ago. It is based on the thorough review of documents and thus is quite accurate. Stefan Zweig is one of the best writers of XX century and I would recommend reading this book to anyone interested in the history of Great Explorations.
Meer lezen
3 mensen vonden dit nuttig
Vertaal recensie in het Nederlands

Erez Davidi
5,0 van 5 sterren Zewig and Magellan
19 oktober 2013 - Gepubliceerd op Amazon.com
Geverifieerde aankoop
Magellan was a Portuguese explorer who led the first expedition to sail from the Atlantic Ocean to the Pacific Ocean. He is the one who named the Pacific Ocean (“peaceful sea”) for the calmness of its water and the lack of wind. Although he wasn't alive to complete the entire journey himself after he was killed in a rather unnecessary battle with a local king in the Philippines, the expedition that he once led resulted in the first circumnavigation of the earth. Needless to say, the journey wasn't smooth and clear skies all along otherwise there would hardly be a reason to write a full book about this expedition. Magellan had to overcome the Portuguese king who tried to sabotage this voyage, the mutiny of his crew, hunger, thirst and very harsh weather. Oh, yeah, he also lost his life.

Zweig and his stirring prose style seem well suited for the task of writing about this dramatic expedition. Just consider this, for example: “His native country left him in the lurch; his ties with office and duty had been severed. So much the better, now he was free. As so often when a man seems to be at the mercy of the winds, he is in reality being blown back upon his own self.”

In his novels, Zweig tends to focus in the psychological aspects of his characters. What drove them and why they acted the way they did. This shows in his biography of Magellan. He portrays him as a quiet introvert and as a very calculated man who rarely made any decision without considering the long term; he was also fairly harsh (at least according to our standards today), but yet very fair.

Zweig doesn't dwell too much into to the details of each and every small thing that happened. Along with his dramatic and enjoyable prose style, "Magellan" reads more like one of Zweig’s novels.