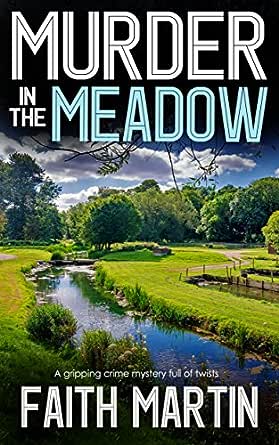 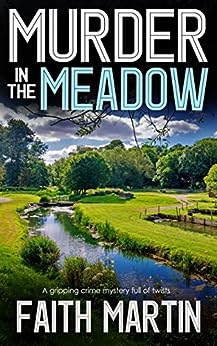 Looking for a brilliant best-selling murder mystery with a feisty female detective?

Meet DI HILLARY GREENE, a policewoman struggling to save her career and catch criminals.

Wayne Sutton is found dead by a stream in a beautiful meadow. His head has been bashed in and a red paper heart left on his body. The handsome young artist had a reputation as a ladies’ man.

DI Hillary Greene discovers that many wealthy married women were buying his paintings and taking ‘private’ art lesson from him. It appears that several of them might have wanted him dead.

Can Hillary get to the bottom of a complex case involving jealousy, love, and cold-blooded murder?

This is a crime mystery full of well-observed characters, which will have you gripped from start to finish.

MURDER IN THE MEADOW is the seventh in a series of page-turning crime thrillers set in Oxfordshire.

What readers are saying about MURDER IN THE MEADOW

“An excellent mixture of suspense, mixed relationships and a cracking murder mystery to solve.” Maggie May

“A really gripping mystery with no shortage of suspects.” Barbara

“Reading another book in the DI Hillary Greene series is like meeting up with a beloved friend. ” Hannelore Cheney

THE LOCATION
The pretty ironstone village of Deddington. Not far from the market town of Banbury. It has an attractive and unusual church, antique shop and hotel, and several pubs known locally for their cuisine. Although not a tourist spot as such, it is a picturesque spot. Water meadows, such as the one where the body is found, are a feature of valleys in the area, and regularly flood in the winter time, adding nutrients to the soil, and making them especially lovely in the spring and summer, when they can flower quite spectacularly.

THE DETECTIVES
DI Hillary Greene
An attractive woman in her forties, Hillary Greene is a police officer of many years’ experience, and came up through the ranks. Consequently, she knows how the system works, and is fiercely loyal to the force without being blinkered to its faults. She is a long-standing friend of her immediate superior officer, 'Mellow' Mallow and enjoys a rather enigmatic relationship with the steely Superintendent Marcus Donleavy. Popular with the rank and file for her no-nonsense attitude and competence.

DCI Philip 'Mellow' Mallow
Mel appreciates Hillary's first-rate ability to solve her cases, and isn't happy about her harassment by the officers from York. Known for his sartorial elegance and laid-back manners, he has a sharp mind, and an eye for the ladies. A good friend and ally for Hillary in her recent tribulations, he's determined to keep his best investigator focused on the problems at hand.

PLEASE NOTE THIS IS A REVISED EDITION OF A BOOK FIRST PUBLISHED AS “BESIDE A NARROW STREAM.”

Join the Joffe Books mailing list to be the first to hear about Faith Martin’s new series coming soon.

Gabi Rosetti
4,0 van 5 sterren "Nothing flashy but enough to get the job done."
2 december 2018 - Gepubliceerd op Amazon.com
Geverifieerde aankoop
DI Hillary Greene and her team are back in the seventh book of this exciting series to investigate and attempt to solve the Wayne Sutton murder. It appears that several women might want the young ladies' man dead...

Interesting plot with intricately woven subplots. The main story was the murder investigation and there were other storylines that were just as intriguing... Who wanted Wayne Sutton dead and why? Who has ulterior motives — a secret agenda? Who is keeping big secrets? Who catches on quickly? Who is distracted — and why? You will have to read the book to get those answers...

I figured out the whodunnit early on, but not why. I thought the guilty party was made pretty obvious in this one. There were the usual twists and turns a good mystery needs and a few surprises, as well. I did not see the why coming, so that made the big reveal worth the wait. A pleasant afternoon read...

AfterThought: I loved the description of the "Oodunnit" (read the book!)...

I enjoy the realism, people grow in their job and move on, new people move in, the investigation goes down the wrong rabbit trail at times, things aren't always as they seem. This book has that and more. A new team member that may or may not be trusted, the loss of a friend, and much more.

I really liked this book and highly recommend it.

AwCrum
5,0 van 5 sterren Good English mystery
26 januari 2018 - Gepubliceerd op Amazon.com
Geverifieerde aankoop
This was another really good English mystery. I have read seven of the series.
I obviously liked them as I kept reading them. I,m amazed at the clever, talented mind of this author. Some of the 7 books I liked more than others but each one had so many intriguing twists & well written characters. I would suggest to those starting to read this series that they read them in order, which I did not do & and the continuity was off. Looking forward to more of Hillary Greene!

Clive K Tonkin
4,0 van 5 sterren Faith Martin nails it with DI Hillary Greene
3 augustus 2018 - Gepubliceerd op Amazon.com
Geverifieerde aankoop
I've read all of the 'DI Hillary Greene' series from the beginning & enjoyed them all as Faith Martin expands on the 'life & times' of Hillary', her team & their exploits in solving crime. The plots are believable, the bad language is minimised & the romance element barely woven into the series is not lurid & the 'crime' the team investigates remains as the main focus while at the same time involving the personalities of her team & her superiors.
The whole series is an absorbing & easy read that holds your interest throughout thereby making the books hard to put down until their end is reached.

Kindle Customer
5,0 van 5 sterren Another Hillary Greene mystery
12 januari 2018 - Gepubliceerd op Amazon.com
Geverifieerde aankoop
This is the seventh book in this series and like the others, it is a good read! The characters and the setting for the story are well drawn and Hillary Greene as the protagonist is a competent and likable heroine.
I have read all of the books in the series and I look forward to the next book's publication.