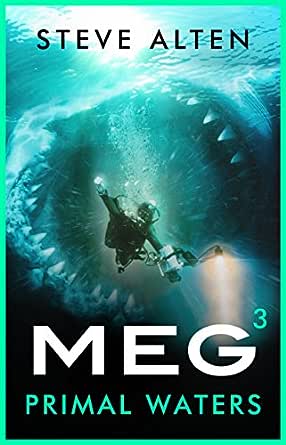 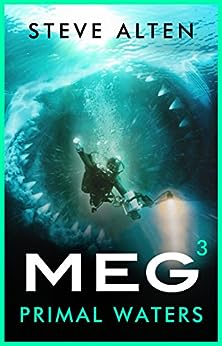 "An exuberant, potboiling action thriller. The shark attack scenes . . . are numerous and exciting. Fans should devour it." --Publishers Weekly on MEG: Primal Waters

"An adrenaline-pumping thriller!" --New York Post on Meg: A Novel of Deep Terror

"A heart-stopping thriller." --Ingram on The Trench

"An entertaining tale of gripping nonstop horror." --Midwest Book Review on The Trench

"A fast-paced thriller with many plot twists." --Booklist on The Trench

"Alten can write a mean prehistoric shark scene." --Publishers Weekly on The Trench

It was the apex predator of all time, the most fearsome creature that ever lived – a 75-foot, 70,000 pound Great White shark. Hundreds of 7-inch serrated teeth filled jaws that could swallow an elephant whole.

Eighteen years have passed since Jonas Taylor last crossed paths with carcharodon Megalodon. Now a middle-aged father of two, he is overwhelmed by mountains of bills and the daily strife of raising a family. But life is about to change. A Hollywood television producer wants Jonas to join his new survival series: Daredevils. For the next six weeks, two teams of crazy daredevils on a South Pacific Ocean voyage will try to outperform one another in front of the cameras.

Jonas needs the money, and the job of doing the colour commentary seems easy enough. But behind the scenes, someone else is pulling the strings. And before it's over, Jonas will again come face to face with the most dangerous creatures ever to stalk the Earth.

Lucky_Rainbow
4,0 van 5 sterren Nice
8 november 2018 - Gepubliceerd op Amazon.com
Geverifieerde aankoop
So my friend and I go into B&N for my birthday a few weeks back and I get "Hell's Aquarium" and "Nightstalkers", only to find out, I'm one book short. And I've already read this series not in order (read "The Trench" first). So to Amazon I go. After getting this book, early too I might add, I begin to read. And wow! What a book! I'd like to give it 3 1/2 as there were some scenes that were gory, a couple scenes you can imagine people having sex and drinking/drugs, but it was exciting so it popped up to a four star review.

I wasn't a fan, however, how Jonas' daughter Dani talked to her father like that. I get she's 18 and wants to be her own person, but you still talk and treat your father with respect. I'm glad she somewhat learned her lesson by the end of the novel. The sponsor's speech to Mac was nice and the twists and turns were good, although one scene was a bit "oh come on, that wouldn't happen!" But sometimes you have to look past that, this is about an extinct shark after all. Also there were a lot of pauses (for lack of a better word) in the book. "All of the sudden Jonas is about to get swallowed, when--
a boat thankfully rescues him! That doesn't happen, but too often the author uses the -- to pause and continue and it gets annoying.

Other than that I wished I hadn't finished it as fast as I did, but good books go through 2-3 days. Now I'm finally on the 3rd book and have others waiting as well. If you like shark books, this is a good one to get. You don't need to read the first two to catch the drift what's going on, although it will help put the puzzle together clearer if you did read the first two.

Kindle Customer
5,0 van 5 sterren This series is an adrenaline pumping good read!!
21 oktober 2016 - Gepubliceerd op Amazon.com
Geverifieerde aankoop
Not since reading Jaws back when I was 12 years old has a book made my heart race and I become so anxiety ridden that I quickly read the next chapter to see who makes it after their encounter with the Meg. I immediately buy the next book in the series so that I can continue the adrenaline pumping good time, almost akin to the Daredevils😉 An old nemesis appears in this book which answers questions from the previous book. Mr. Steve Alten certainly covers ALL his bases where these books are concerned. Well I must be off, the next Meg book awaits my enthusiastic attention.
Meer lezen
4 mensen vonden dit nuttig
Vertaal recensie in het Nederlands

Amazon Customer
5,0 van 5 sterren Outstanding
1 september 2018 - Gepubliceerd op Amazon.com
Geverifieerde aankoop
I loved every single book in the series sand though at times it can be slow, the action picks up again. Of course this book should be read "with a grain of salt" but who cares? It's like watching a scary movie where the main character does unbelievable things. So far all the books in the series have been a lot of fun and I can't believe people criticise them. Mr. Alten is an excellent writer and the story pulls you in. It doesn't matter whether you find it believable or not.
Meer lezen
Een iemand vond dit nuttig
Vertaal recensie in het Nederlands

Jane Stecker
5,0 van 5 sterren Jaws meets Reality TV
20 augustus 2018 - Gepubliceerd op Amazon.com
Geverifieerde aankoop
Ever wondered what would happen if your favorite Reality stars met a monster of the deep seas? That’s exactly what Steve Alten explores in this thrill-ride of a novel. Our favorite characters, Jonas, Terry, and Mac are faced with hard financial times. When a TV producer offers Jonas a large sum of money to join his reality TV shoe, Jonas can hardly refuse. What could go wrong? Read this book and find out.
Meer lezen
Een iemand vond dit nuttig
Vertaal recensie in het Nederlands