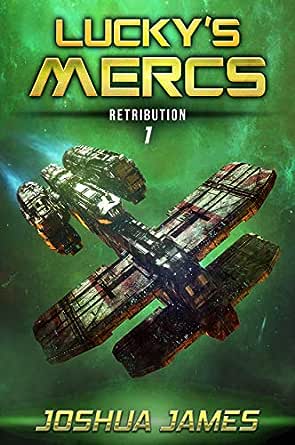 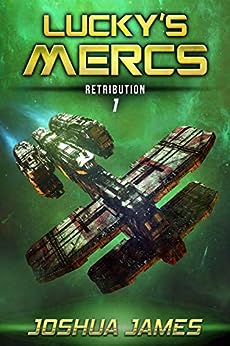 Lucky Savage was once a powerful Empire Marine. But that was before the Empire collapsed, sinking the outer colonies into chaos and leaving the galaxy on the precipice of disaster.

Now his ship, Last Gasp, is home to a ragtag crew of misfits and ex-soldiers just trying to navigate the endless conflicts while hoping to score a big payday. So far, they'd settle for scratching out enough to cover fuel.

When a job with Lucky's old employer comes along, it looks like their luck might be turning. But it quickly goes sideways, and they find themselves in the middle of a massive manhunt for a deadly experiment gone wrong.

Can the mercs save the day? Who knows. They're just trying to save their own skin.

It wouldn't hurt to get paid, either.

Retribution is the first book in Lucky's Mercs, an action-packed new series that reads like an unholy union of Starship Troopers and Firefly.
click to open popover

Kindle Customer
5,0 van 5 sterren Fast, exciting read with creepy creatures!
13 november 2019 - Gepubliceerd op Amazon.com
Geverifieerde aankoop
I like Lucky and his strange band of mercs! This book zipped along with weird scary creatures and twists and turns all the way to the very end. The epilogue promises we haven't seen the last of the bad guy.
Meer lezen
2 mensen vonden dit nuttig
Vertaal recensie in het Nederlands

N.Greene
5,0 van 5 sterren Action continues.
15 januari 2020 - Gepubliceerd op Amazon.com
Geverifieerde aankoop
There is an authors' saying instruction to pick the reader up by his neck and throw him into your world. This author does that and more. Characters you will love and hate. Moves through action after action. I even wondered when the characters would get a time off R&R but no R&R for them. Onward. great reading !
Meer lezen
Een iemand vond dit nuttig
Vertaal recensie in het Nederlands

Marie Colgan
5,0 van 5 sterren More Lucky!
25 november 2019 - Gepubliceerd op Amazon.com
Geverifieerde aankoop
More Lucky just my cup of tea. There are a couple of new characters. One is a constant pain. I was really hating him; but, thought better of him by the end of the book. I am waiting for more.
Meer lezen
Vertaal recensie in het Nederlands