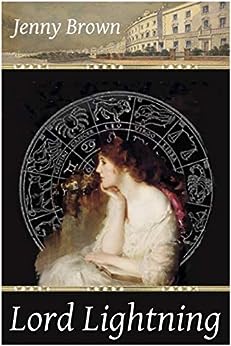 Everyone knows the man they call "Lord Lightning" is a cold-hearted rake with an unsavory reputation except Eliza Farrell, an innocent young astrologer fresh from a small country village whose horoscopes tell her he is a man who was born to love.

When Eliza's predictions drive away Lord Lightning's mistress, he indulges in one of his famous pranks and abducts her, telling her she must take his mistress's place. It's just a joke. But when Eliza shocks him by taking up his offer, the dissolute lord meets his match in a woman as passionate and unpredictable as himself.


Originally published in 2010 and nominated for an RT Book Reviews Reviewers' Choice Award for best hero, this second edition has been edited and improved.

Rural Reader
4,0 van 5 sterren Their futures were written in the stars.
8 april 2019 - Gepubliceerd op Amazon.com
Geverifieerde aankoop
Edward Neville, Lord Hartwood (aka Lord Lightning) is proud of his unrepentant libertine reputation. He is self-absorbed and driven by his own agenda. He is definitely not a peer to be crossed. Which is why Eliza Farrell, a 29 year old unrepentant spinster- slash-astrologer, finds herself alone in a carriage with Lord Lightning heading for his London townhouse. She has just unknowingly sabotaged Lord Lightning's agenda.

I almost didn't download this book because of the negative reviews. However, I'm glad that I followed my own seasoned instincts. Not only was the story of Lord Lightning original, but Jenny Brown did a marvelous job of morphing Edward and Eliza from their flawed characters into their better characters. I enjoyed being in each characters head as they schemed and interacted with each other, and as they slowly began to understand and respect each other.

All in all, this was an enjoyable read, even for one such as I who is not into astrology. The writing was good, the dialogue sparkled, the descriptions were very visual, the villain was believable, and the ending was very happy. Since I personally like an epilogue at the end of a novel, I was disappointed that the author did not take their HEA ending just that one step further. Otherwise, I really liked this book.

Content alert: There is some light swearing (da**, he**) and a few uses of Go*, but otherwise there are no hardcore vulgarities. There is some very passionate kissing, and there is one artfully described bedroom scene. Lastly, there is an inept attempted rape that is not too descriptive.

Karen Talley
1,0 van 5 sterren Melodramatic mess
1 mei 2019 - Gepubliceerd op Amazon.com
Geverifieerde aankoop
This book nearly bored me out of my mind. All of the rambling on and on about astrology was seriously mind-numbing. What made it even worse for me was that I found myself laughing at totally inappropriate spots. The whole thing reminded me of one of the old melodramatic silent films where the "bad" guy keeps trying to be bad even though he isn't and the sweet "heroine" must convince him that he really does have a good heart after all! Instead of Regency characters, I saw in my mind ladies clothed in flapper shoes, silk dresses, and headbands with feathers. The cheesy dialogue cried out for the heroine to put one pale hand on her forehead and fling another arm to the side as she was pleading with him to be the man he really was meant to be! Agh! I think this ranks with one of the worst books that I have ever read. I honestly don't understand all the great ratings.
Meer lezen
21 mensen vonden dit nuttig
Vertaal recensie in het Nederlands

Rachel on the Cape
5,0 van 5 sterren Truly original and very compelling
8 april 2019 - Gepubliceerd op Amazon.com
Geverifieerde aankoop
I couldn't stop reading this wonderful story. I started mid-afternoon and finished in the wee hours of the next day. It's so refreshing to discover an author with such a unfettered imagination. Eliza, the heroine and an accomplished astrologer, is a delight. She's 29 and a bluestocking spinster by choice. Or so she believes, until she becomes entangled with the notorious Lord Lightning, whose facade is equally complex. Their interactions are intense, intelligent, deeply psychological and, of course, fraught with unexpected love. The plot and settings are equally unique - no fussing over gowns and which balls to intend - but rather the story starts in the backstage of a London theatre before moving to seaside Brighton, where a supporting cast of unusual, complicated and perverse characters makes things even more interesting.
Meer lezen
11 mensen vonden dit nuttig
Vertaal recensie in het Nederlands

Tina Morley
5,0 van 5 sterren A Page-Turner of a Story with Love and Redemption
6 april 2019 - Gepubliceerd op Amazon.com
Geverifieerde aankoop
This story exceeded my expectations. The characters were colorful and the banter was fun. It kept a good pace throughout with lots of unknowns being revealed along the way. There was tension between the spinster Eliza and Lord Lightning, but not too much. There were enough feel-good moments not to feel cheated. Sometimes internal dialogue slowed the pace a bit, but otherwise, it was a page-turner of a story. It has lots of sensuality, but thankfully isn't all about the sex and there's really only one sex scene. I think Eliza's age didn't fit with her description of being young and little, but her intelligence and wisdom make her a wonderful heroine. Lord Lightning has his vices, but he's not rotten to the core as he would like everyone to believe. This is is a story of love and redemption along with an exciting plot that thickens as the story unfolds. The ending was well developed too.
Meer lezen
10 mensen vonden dit nuttig
Vertaal recensie in het Nederlands

Synergy
4,0 van 5 sterren New to me author
11 april 2019 - Gepubliceerd op Amazon.com
Geverifieerde aankoop
This is my first book by this author. I was pleasantly surprised by how much I enjoyed the read. You can tell the author did her astrology homework. The included astrology references were just enough for my taste — providing enough details to legitimize the heroine as a serious professional, but not so much that I was bored with their inclusion. The hero is a man capable of great love who was bullied by his mother throughout his childhood. The result is a man as profligate as he can accomplish in order to spite his mother. When he stumbles upon the heroine things begin to change. The end result is a HEA truly worthy of them both.
Meer lezen
5 mensen vonden dit nuttig
Vertaal recensie in het Nederlands
Ga naar Amazon.com om alle 81 recensies te bekijken 4,3 van 5 sterren
Terug naar boven
Over ons
Verkoop bij ons
We helpen je graag
© 1996-2020, Amazon.com, Inc. en dochterondernemingen