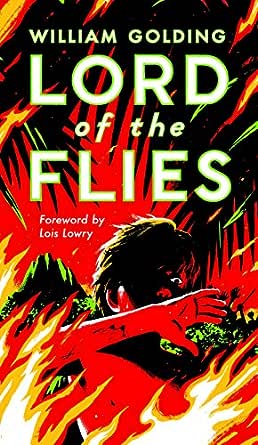 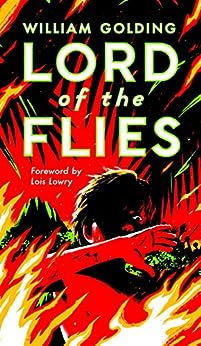 Golding’s iconic 1954 novel, now with a new foreword by Lois Lowry, remains one of the greatest books ever written for young adults and an unforgettable classic for readers of any age.

This edition includes a new Suggestions for Further Reading by Jennifer Buehler.

At the dawn of the next world war, a plane crashes on an uncharted island, stranding a group of schoolboys. At first, with no adult supervision, their freedom is something to celebrate. This far from civilization they can do anything they want. Anything. But as order collapses, as strange howls echo in the night, as terror begins its reign, the hope of adventure seems as far removed from reality as the hope of being rescued.

Kiwes
5,0 van 5 sterren An Timeless Treasure. . .
11 juli 2018 - Gepubliceerd op Amazon.com
Geverifieerde aankoop
In my quest to read the greatest American horror stories of all time, I'm so elated to say I've finally reached Lord of the Flies. Oh my, what an epic story in great proportions! I think what scared me the most about this story are the parallels between the timeline in the story and our time we're living right now.

Our story begins with a plane crash that lands the boys on this beautiful coral oasis island in the middle of who-knows-where. Immediately, Ralph, being one of the eldest boys decides to take it upon himself to explore the island and find out how many others are there. He takes a conch shell and blows through it and discovers there are various size boys displaced the same as he.

Until they can be rescued, Ralph takes a poll and asks the boys to vote who should be their chief to help guide them. Hands down, Ralph wins. It is realized very early that the littler boys are frightened and crying for their mothers, while the bigger boys begin to think of survival straight away. As they explore and learn about the island, they find fruit they can eat, while some of them ate things that weren't so good, causing them to get sick.

The longer they stayed on the island, it was becoming obvious that a shift was changing within 'some' of the boys. Ralph could clearly see that his word was no longer being listened to. They seemed to be interested in Jack Merridew and what he had to say. After all, he was about killing pigs for meat to eat, and killing anything 'else' that stood in his way. As the story advances, it becomes very clear that these young boys have turned into total savages. They reverted back to caveman days without thought or a care in the world.

Eventually, as the boys began to divide, Jack's tribe was much larger than Ralph's. Poor Ralph had no one he could confide in or help him. Jack had a thirst for blood and didn't mind spilling it--and it did not have to be a pig's blood. If you didn't follow 'his' rules, you might find a spear stuck in your chest.

I've always heard about Lord of the Flies and I knew when someone said people are acting like the named title, I knew exactly what they meant. The saddest thing of all, Golding wrote this novel 64 years ago, and here I can see things happening to our country right now! Actually, not just our country, but the world. With social media and politicians who feel it's quite all right to say and act any way they please as if this is the norm! All the laws and rights we Americans have fought so hard for to ensure an equality for all Americans, was for not. Our country is reverting back to a time I dare not think of. Hmm, see the similarities of the story and today! Who knew Golding would tell a story that would eventually come true. How terrifying is that!
Meer lezen
70 mensen vonden dit nuttig
Vertaal recensie in het Nederlands

French Bulldog
5,0 van 5 sterren A deserving inclusion in the Great Books of the 20th Century edition
24 september 2014 - Gepubliceerd op Amazon.com
Geverifieerde aankoop
Review of the Novel: As a teacher, I have to teach the same novels repeatedly. Quite a few novels that were immensely meaningful to me as a teenager are in hindsight only great young adult novels or at best great for only a few reads. The Lord of the Flies, however, is not one of those works. I must have read it closely at least ten or even twenty times by now, but I still find it engaging and stumble upon new realizations. Students who think they've already read (and/or failed to appreciate) the Lord of the Flies discover a work that shakes them to the core of their being, once I force them to slow down and really appreciate Golding's rich work. And I'm really not being hyperbolic. I just want to teach this novel over and over and over again.

Review of the Penguin Great Books edition (ISBN 978-0-14-028333-4): As for this edition, I highly recommend it. The cover is well-designed aesthetically and functionally. The binding is tight, especially for a paperback. The deckle edges are a nice touch. The font type and spacing is quite nice, not too big or small, so that it can pack in the entire novel into 182 pages of fine-quality paper that might actually be acid-free, even if not lignan-free, versus versus Riverhead edition's acidic 272 pages. The only downside to this edition is that the margins are a bit narrow for someone like me who loves marginalia. But otherwise, I'd highly recommend this edition.

Frank Nordman
4,0 van 5 sterren "Maybe there is a beast… maybe it's only us."
10 mei 2017 - Gepubliceerd op Amazon.com
Geverifieerde aankoop
I was tempted to give this five stars, since in so many ways it strikes me as the kind of masterpiece, like Heart of Darkness, that I imagine will retain its horror and readability for centuries. The prose veers (or as Golding would say it, "tends") from plain to painterly. The story is well known: a sort of allegorical morality play set in modern times -- fancy English boys left to their own devices don't so much as revert to darkness as discover primitive outlets for the darkness reflected in their greater society. This is what I love about Heart of Darkness: try as one might, Kurtz cannot be pigeonholed into good or evil. He is excellent at what he does, and what he does is evil. Kurtz is a true reflection of what excellence was to Colonial Europe, and in so far as Colonial Europe was good, cultivated, honorable, and esteemed, so is Kurtz. Kurtz isn't good or evil; he is true.

Golding's version is darker. It centers mostly around the corrupting power of urges to overwhelm social order. Freudian criticism abounds, but the parallel I kept coming back to was Rome. I found that Piggy, no matter how truly annoying he is (another brilliant stroke by Golding is to make Piggy strangely unsympathetic), recalled those numerous Republicans of the Early Empire who advocated in a shrill but useless manner for a return to Senate rule but were shunted aside and usually killed by deranged sociopaths who behaved quite like like Jack. But be it Freudian or historic, any framing of this book feels cheap and hollow because the story has such a complexity of primal urges that it feels almost biological.

Golding said he came up with the idea of book after reading his children "Treasure Island or Coral Island or some such Island" in the years of the hydrogen bomb and Stalin and asked his wife, "why don't I write a children's story about how people really are, about how people actually behave?" To me that's a chilling question and it reveals an architecture not based on rigid Freudian or historical or symbolic parallels. Its portrait of sadism could have been lifted out of the newspapers; its struggle for dominion over the weak is an almost sexual frenzy recalls everything I know about torture in the dungeons of Argentine or US military prisons. In this respect, I think the book, like Heart of Darkness, is timeless.

But I chose not to give it five stars because at the center of Golding's book is a kind of rigid Christian iconography, like that you find in the Poisonwood Bible, that offends me, perhaps because it reminds me of the way I wrote my Freshman year of college, or perhaps because that rigidity, that allegiance to a=b symbolic logic insults my intelligence. The martyrdom of Simon, I felt, demeaned the human quality of Simon. I liked him best because he struck me as the most shrewd and practical. Reducing him to an icon transforms him into a variable: Simon = Paul or Peter or whomever, but ergo facto Simon ≠ Simon. When he comes down to the beach mutting "something about a body on a hill" Simon ceases to be a reflection of human complexity, or biological completeness, and instead becomes a rehashed precedent from Sunday school.

I've often felt that Heart of Darkness' genius was that it somehow reflected the effect of Darwin and modern thinking on the antiquated ideas of Colonial Europe, ie Kurtz isn't good or evil because good and evil are artifices that wilt beneath analysis. When Golding adheres to this materialist perspective, the book is masterly. When he swears allegiance to worn out Christian parables, that complexity is reduced to slips of paper.
Meer lezen
26 mensen vonden dit nuttig
Vertaal recensie in het Nederlands