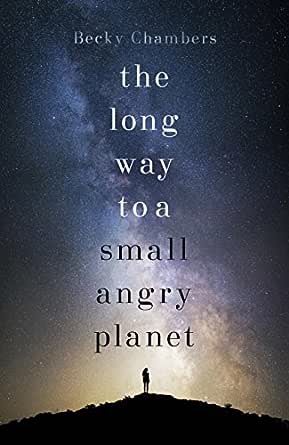 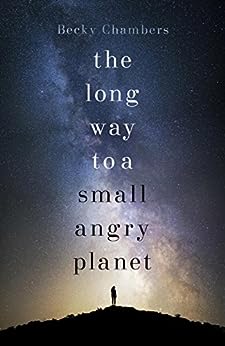 Becky Chambers is the author of the science fiction novels The Long Way to a Small, Angry Planet, A Closed and Common Orbit, and Record of a Spaceborn Few. Her books have been nominated for the Hugo Award, the Arthur C. Clarke Award, and the Bailey's Women's Prize for Fiction, among others. She also writes essays and short stories, which can be found here and there around the internet. In addition to writing, Becky has a background in performing arts, and grew up in a family heavily involved in space science. She spends her free time playing video and tabletop games, keeping bees, and looking through her telescope. She lives with her wife in the woodsy north of California.

"One of the most enjoyable, brilliantly realized spacey SF novels I've read in ages."--James Smythe, author of The Echo and The Explorer

"Humane and alien, adventurous and thoughtful, vast in its imagination and wonderfully personal in the characters it builds. But above all else, it is joyously written and a joy to read."--Claire North, author of The First Fifteen Lives of Harry August

"Becky Chambers' debut is a joyous, optimistic space opera ... Although it isn't shy about tackling Big Questions, Planet is a heart-warming debut novel that will restore your faith in science fiction (specifically) and humanity (in general)."--Tor.com

"[A] wonderfully imaginative and quirky novel [...] It is hard to believe that this is Becky Chambers' first novel, as it is so well constructed, imaginative, and fluently written."--Strange Horizons

"There are so many amazing things about this book which I have tried to cover in my review, but to sum it up in one word I found this book to be: Perfect!"--Fantasy Book Review (Book of the Month; 10 out of 10) --Deze tekst verwijst naar een alternatieve kindle_edition editie.

A rollicking space adventure with a lot of heart

When Rosemary Harper joins the crew of the Wayfarer, she isn't expecting much. The patched-up ship has seen better days, but it offers her everything she could possibly want: a spot to call home, a chance to explore the far-off corners of the galaxy and some distance from her past. And nothing could be further from what she's known than the crew of the Wayfarer.

From Sissix, the exotic reptilian pilot, to Kizzy and Jenks, the chatty engineers who keep the ship running, to the noble captain Ashby, life aboard is chaotic and crazy--exactly what Rosemary wants. That is, until the crew is offered the job of a lifetime: tunneling wormholes through space to a distant planet. Sure, they'll earn enough money to live comfortably for years, but risking her life wasn't part of the job description.

The journey through the galaxy is full of excitement, adventure and mishaps for the Wayfarer team. And along the way, Rosemary comes to realize that a crew is a family, and that family isn't necessarily the worst thing in the universe . . . as long as you actually like them.

K.J. Middelburg
5,0 van 5 sterren One of my Favorite SF Novels
1 maart 2019
Geverifieerde aankoop
I have read this book probably seven or eight times already. It's a wonderful, slightly episodic story of the crew of a hard-working spaceship, just trying to get along in the universe. What makes it so fabulous are the characters and their relationships. Highly recommended for anyone who loved the tv show Firefly.
Meer lezen
Nuttig
Commentaar geven Misbruik melden
Vertaal recensie in het Nederlands

Henk de Kruyff
4,0 van 5 sterren A positive SF story
4 december 2017
Geverifieerde aankoop
What really surprised me about this book is the positive tone in the story. This time sets it apart from most other stories. And still the author manages to create tension and excitement. It's a very good SF story and I can't wait to read the sequel!
Meer lezen
Nuttig
Commentaar geven Misbruik melden
Alle 2 klantenrecensies bekijken
Klantenrecensie schrijven

Amazon Customer
1,0 van 5 sterren More Weak Diversity Programming Inside A Meh Sci-Fi Opera
10 september 2018 - Gepubliceerd op Amazon.com
Geverifieerde aankoop
It's a mediocre sci-fi story for SJWs. I'm reading along waiting for something to like and all get is poorly veiled preaching about diversity. There are moments when you see the author could be good, maybe great, but then she feels compelled to awkwardly steer the story toward short "teaching moments" about LGBT tolerance, racism, and other post-millennial tolerance BS. I suspect the high rating is due to SJW listings rather than the quality of the story.
Meer lezen
182 mensen vonden dit nuttig
Vertaal recensie in het Nederlands

GreyPilgrim
1,0 van 5 sterren Mostly Harmless
17 november 2017 - Gepubliceerd op Amazon.com
Geverifieerde aankoop
I really wanted to like this book, but was quite disappointed. Ms. Chambers’ influences are easily discernible (Star Trek TNG, Farscape), but to an extent where I felt like I was reading a teleplay for a single TV episode. The story feels like it should be building towards something big, but it fizzles. There is some decent world building, and some of the characters are well-drawn (exception is Kizzy the annoying ‘zany genius’ trope...ugh). My biggest issue is that Ms.Chambers has some elements for a really great yarn, but ends up using this as a forum for a tired treatise of ‘political correctness’. All the heros are identified and bound together by one motto "we celebrate diversity", and all the villains by the motto "we’re xenophobic". This could have been demonstrated by their actions alone, but the author continually hits the reader over the head with this to the point like I felt I was in a “Contemporary Anthropology" course at Berkeley. It was just far too ‘on the nose’ and the constant moralizing pulled me out of the story as the author’s agenda was intrusively evident. There was also a more subtle attack on religion in the story arc of the character ‘Ohan’, and is a curious contradiction to the books ceaseless championing of inclusiveness. Basically I feel the author is an extreme liberal with intolerance to ny viewpoint except her own, and an agenda to proclaim. The writing and dialogue are sophomoric at best. There is little to no science in this science fiction. I could barely finish this book, and am bewildered by it’s acclaim.
Meer lezen
167 mensen vonden dit nuttig
Vertaal recensie in het Nederlands

Michael and Julie
3,0 van 5 sterren Lots of imagination, not a lot of story
31 januari 2016 - Gepubliceerd op Amazon.com
The title "The Long Way to a Small, Angry Planet" gives you fair warning: this is a road trip book. The road trip just happens to involve a small spaceship (the Wayfarer) that makes small hyperspace bypasses for a living. And while there aren't any Vogons among the ship's crew, there are several non-humanoid aliens, including an adorable multi-armed chef thing and a sexy female lizard person. The focal character is Rosemary, a young human woman who has chosen to travel far from home in order to escape the stigma of a scandal back on Mars. Rosemary's first space journey just happens to coincide with the Wayfarer's Big Break--an opportunity to build the first bridge the multi-species Galactic Commons (GC) and an enigmatic (and possibly very angry) alien race that dwells near the galactic core.

The main selling points of "The Long Way to a Small, Angry Planet" are the imagination Becky Chambers puts into the development of her alien characters and the relationships she creates between her human and her non-human characters. The navigator, for example, is from an alien species that infects itself with a virus that allows it to see spatial structures invisible to all other species. The Doctor-Chef (the ship's medical officer and cook) has six limbs and multiple throats that make human speech a bit difficult. The pilot is from a reptilian species with a complex family structure that involves intense parent-foster child relationships but no parent-biological child relationships. All of the ship's humans that have romantic entanglements with non-humans , including one with an AI, one with her shoes (that's a joke, sort of), and one with a member of an irresistibly gorgeous humanoid species that communicates through skin color. The emphasis is less on how weird aliens are, but on what people (or sentients) growing up in very different circumstances can teach us, both about ourselves and about the nature of life.

This description may make my 3-star rating seem a bit stingy, especially after I say that Chambers writes well and that there are moments of real warmth, humor, and excitement in the book. Still, I had a hard time reading "Angry Planet." So much goes into making the aliens interesting that not a lot is left over for plot, action, or individual character. There's not much of a story beyond what I've already told you, and the most vivid human characters are secondary: ditzy Kizzy, pint-sized Jenks, and angry, angry whatshisname the algae tech. Rosemary makes a couple of daring choices during the course of the novel, but daring is no substitute for depth. High expectations about how her scandal is going to play out mostly fizzle. There's just not a lot of juice here. So, while I might give the novel a 7 on a scale of 1-10, it gets a 3 on Amazon's 1-5 scale.