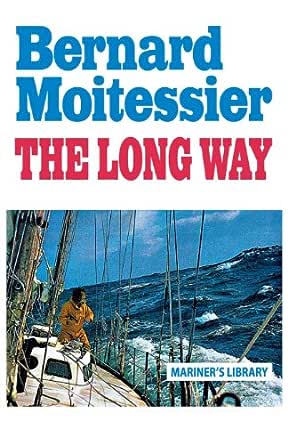 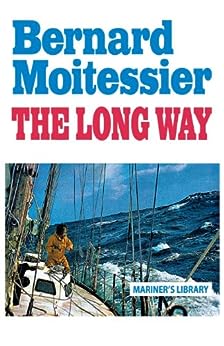 Moitessier is better known as one of the greatest ocean voyagers and was a legend in his time. Last month we reviewed the last book he wrote Tamata and the Alliance. This book is about his Round the World Race for singlehanded yachts. For Moitessier, the race finished in mid-Pacific after he had passed the three Capes and crossed his outward track, leading, and with the hardest sections behind him, he decided to forfeit the race and continue into the Pacific again, to anchor finally among friends in Tahiti. His actions were never explained by the news media; they could not have been, for the voyage had always been seen by Moitessier as something other than a sponsored, publicized, competitive event. It was on the ocean, alone with his boat, that Moitessier began to regard this as a voyage that could not end for him with the reward of those whose values were not his.--Sailing Inland & Offshore

One of the world's most famous ocean sailors, Moitessier had sailed for more than a year from Plymouth, England to the Indian Ocean when he inexplicably abandoned the lead in the 1968-1969 Round-the-World single-handed race. He sailed to Tahiti, dropped anchor and dropped out. Until the publication of this book, only Moitessier and a few friends knew why. Most of the book is a diary of that voyage with philosophical side trips into modern civilization. There is also a 60-page appendix that can stand alone as a small reference volume of details such as route planning, sail repair, the problems of sail and line chafe, rigging and hull construction, self-steering, freak waves and weather, plus much more. Altogether a strange, fascinating, and informative book.--Boat U.S. --Deze tekst verwijst naar een alternatieve kindle_edition editie.

Bernard Moitessier was born in 1925 in Indochina and much of his sailing knowledge was gained during time spent at sea with the fishermen of the Gulf of Siam. One of the greatest ocean voyagers, he became a legend in his time. He was also a gifted writer and wrote four books describing his seagoing adventures. He moved to France where he spent the last years of his life working on his memoirs, Tamata and the Alliance (Sheridan House, 1995), the story of an unusual man and an exciting life. Bernard Moitessier died in the summer of 1994. --Deze tekst verwijst naar een alternatieve kindle_edition editie.
click to open popover

Q
5,0 van 5 sterren Sublime reading
24 mei 2019 - Gepubliceerd op Amazon.com
Geverifieerde aankoop
I truly enjoy those books where a solitary person takes on the unknown and writes as they find it day by day. This is a classic example of a man that entered a world race and then enjoyed being alone on his boat with the ocean and nature so much he gave up a race to the finish where he could have won and carried on to go round again! Reading this you can feel how he became part of the oceanic world he sailed and knew its foibles and sudden changes but merely accepted that as part of the trip. Mesmerising stuff and so rare today. It was not written seeking fame or glory it was written as almost a personal log of a journey. This was a journey that changed the man and his life was never the same again.
Meer lezen
4 mensen vonden dit nuttig
Vertaal recensie in het Nederlands

Joel McGehee
5,0 van 5 sterren The best of many books about solo sailing around the world.
26 september 2015 - Gepubliceerd op Amazon.com
Geverifieerde aankoop
I have read a number of nautical tales written by or about sailors who went around the world either in races or just for the challenge or interests of it, beginning with they were you the original one by Captain Joshua Slocum – sailing around the world alone. The thing that sets Moitessier apart is that he was a sailor first with an almost mystic connection with the ocean and his craft whereas others, I exclude Slocum, were adventurers first and true sailors second. In his account he never seemed to have been pressured to hurry, rather he maintained a rational and relaxed Pace with an emphasis on not making mistakes. Hence he finished well above else and in joy himself so much apparently they decided not to pick up the prize which he had won, handily, electing instead to stay on the ocean for another 10 or 12,000 miles.

For anyone interested in sailing, there is a long section at the back of the book of advice and explanations of sailing lower, about equipment and every other important aspect that a knowledgeable sailor should understand.

James Mcleod
3,0 van 5 sterren A thrown together collection of ramblings.
28 maart 2020 - Gepubliceerd op Amazon.com
Geverifieerde aankoop
I am an aficionado of sailing books and stories. After having read A Voyage for Madmen by Peter Nichols (5 stars) I was looking forward to reading this. Very disappointed. It felt like it was written to fulfill a contract obligation made prior to the race, and at the end of the book was almost incoherent.
That being said.....the appendix give some good general tips on sailing gear and techniques that I found very interesting and well presented. To me that was by far the best part of the book.
Meer lezen
Een iemand vond dit nuttig
Vertaal recensie in het Nederlands

Joe
5,0 van 5 sterren Excellent read
22 november 2018 - Gepubliceerd op Amazon.com
Geverifieerde aankoop
Excellent insight into the mind of a pioneering sailor. Includes lots of technical details but also views into his state of mind and the near insanity that many solo circumnavigators flirt with. Also good insights into blue water cruising of 50 years ago. Appendix is a dry listing of methods of sailing, of which maybe 30% are irrelevant today so you can decide whether to skip that or not.
Meer lezen
2 mensen vonden dit nuttig
Vertaal recensie in het Nederlands