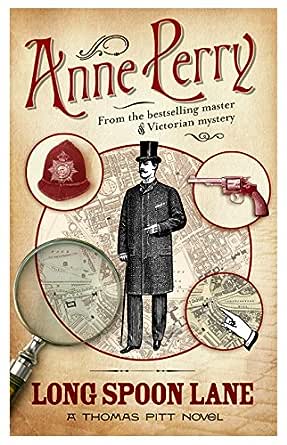 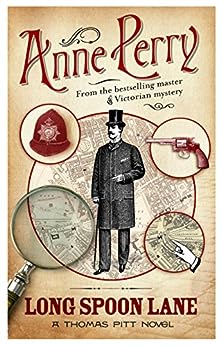 "[Anne] Perry has once again delivered the tasty concoction her readers have come to expect . . . and presents us with moral and political puzzles that are all too close to our own."--Los Angeles Times Book Review

"Long Spoon Lane is one of [Perry's] best."--The Seattle Times/Post-Intelligencer."

"[Readers] will appreciate the cleverly orchestrated political machinations as much as the personal agendas."--Booklist

Not even the police force is free from corruption...

Anne Perry's bestselling Inspector Pitt novels entice readers into a literary world almost as real as the original, and are perfect for fans of C. J. Samson and Ann Granger. In Long Spoon Lane, flower sellers, costermongers, shopkeepers, and hansom drivers ply their trades, while the London police watch over all. Or so people believe...

Early one morning, two bombs explode in an East London street. Forewarned of the attack, Thomas Pitt of the Special Branch, arrives in time to chase the bombers to a tenement in Long Spoon Lane. There, two men are arrested and one shot dead; but who and where and is the killer? As Pitt investigates, he uncovers truths more disturbing than the acts of a few misguided idealists. There's a web of corruption within the police force, and all the clues point to Inspector Wetron of Bow Street as its mastermind. But as head of the sinister Inner Circle, Wetron has powerful allies in every sphere.

What readers are saying about Long Spoon Lane:

'[Anne Perry] is quite exceptional in her ability to craft a complex plot with wholesome characters in a fascinating period/location. I can barely wait for Pitt's next adventure'

'Totally captivating, I could not put it down'

Kat
5,0 van 5 sterren anarchy, betrayal, and death
15 september 2019 - Gepubliceerd op Amazon.com
Geverifieerde aankoop
I have enjoyed the Thomas and Charlotte Pitt series for over twenty years now and I finally read them
all except this one, which was the last one I hadn't read (barring any new ones to come out). After
a bombing, Thomas Pitt must find out who killed a young man that was from a well-known family. Why
was he targeted? Well hidden secrets seek to stop Pitt in his tracks. Can he find the culprit or will he die
trying? Must read.

Nunna U Bizniz
3,0 van 5 sterren Worse formatting than usual
26 augustus 2018 - Gepubliceerd op Amazon.com
Geverifieerde aankoop
As much as I enjoy Anne Perry's novels, the formatting by Ballantine Books is much worse than usual. I'm quite accustomed to the many, many typos throughout these e-books. However, this one doesn't even have a table of contents listed in the drop down menu. Seriously, no table of contents? Anne Perry's work deserves better than this.
Meer lezen
Een iemand vond dit nuttig
Vertaal recensie in het Nederlands

Printophile
5,0 van 5 sterren If you are a fan of Perry's Pitt mysteries this lives up to the quality of eariler books in the series
19 mei 2015 - Gepubliceerd op Amazon.com
Geverifieerde aankoop
Anne Perry's mysteries do not appeal to many mystery readers. I find Perry's Pitt mysteries very interesting. I have read all of them to date. I would not recommend reading this book as an introduction to the series. To me, a large part of my ongoing interest in the series is the growth not just in the Pitts, but in a number of of other characters.
Meer lezen
4 mensen vonden dit nuttig
Vertaal recensie in het Nederlands

Diane Wood
5,0 van 5 sterren Great story
11 oktober 2019 - Gepubliceerd op Amazon.com
Geverifieerde aankoop
I love Anne Perry. This book was really good. I always enjoy reading her books and most of all when she explains the areas of london you can see it and feel like your there
Meer lezen
Vertaal recensie in het Nederlands

Cynthia Kirkland
5,0 van 5 sterren These books are wonderful!
23 januari 2016 - Gepubliceerd op Amazon.com
Geverifieerde aankoop
I truly enjoyed this book. Anne Perry is an exceptional writer. In addition to spinning an intriguing mystery, she also weaves a picture of Victorian England that makes you feel as if you were there. If you are a fan of English history and a mystery buff, Thomas and Charlotte Pitt will be right up your Long Spoon Lane! I strongly encourage you to read the books in order so that you can see the progression of history unfold! Enjoy!
Meer lezen
2 mensen vonden dit nuttig
Vertaal recensie in het Nederlands
Ga naar Amazon.com om alle 82 recensies te bekijken 4,4 van 5 sterren
Terug naar boven
Over ons
Verkoop bij ons
We helpen je graag
© 1996-2020, Amazon.com, Inc. en dochterondernemingen