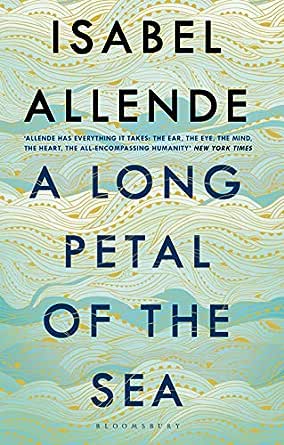 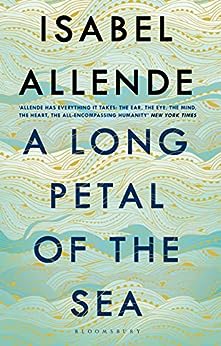 A Long Petal of the Sea (English Edition) Kindle-editie

"A tale that is seductively intimate and strategically charming . . . a virtuoso of lucidly well-told, utterly enrapturing fiction . . . Allende deftly addresses war, displacement, violence, and loss in a novel of survival and love under siege."--Booklist (starred review)

"A Long Petal of the Sea is a rich and transportive novel, epic in scope, about finding love and finding home."--PopSugar

"An immersive read about love and survival."--Real Simple "Isabel Allende has time and again proven herself a master of magical realism. Her latest novel . . . serves as a paean to human love and endurance."--Elle "Allende fans have been waiting with bated breath for her latest novel, and A Long Petal of the Sea doesn't disappoint."--Marie Claire

"The wondrous Isabel Allende is back, doing what she does best."--Read It Forward "In addition to being well-researched historical fiction, it also parallels current issues."--Book Riot "Powerfully told, this is a soaring, inspirational tale."--The Orange County Register "Allende . . . has deftly woven fact and fiction, history and memory, to create one of the most richly imagined portrayals of the Spanish Civil War to date, and one of the strongest and most affecting works in her long career." --The New York Times Book Review "Allende's latest . . . marks a return to the time and setting of the book that jump-started her literary career, The House of the Spirits, but with far less supernatural elements and a more expansive engagement of revolution, exile and the determination of the human spirit. . . . A page-turning story rich with history and surprising subplots that keep the novel unpredictable to the end." --Los Angeles Times "Isabel Allende's A Long Petal of the Sea gets to the heart of immigrant struggle. . . . [It] begins, as it ends, with the heart. . . . Victor and Roser's story is compelling. . . . Allende's prose is both commanding and comforting. The author writes eloquently on the struggle of letting go of one culture to embrace a new one and shows that one's origin story is not the whole story. . . . While debate and policy surround the issues of refugees and immigration, Allende reminds us that these issues, at their core, are made up of individuals and their love stories." --USA Today


'Allende's style is impressively Olympian and the payoff is remarkable' Guardian

*A Daily Telegraph and Irish Times Highlight for 2020*

September 3, 1939, the day of the Spanish exiles' splendid arrival in Chile, the Second World War broke out in Europe.

Victor Dalmau is a young doctor when he is caught up in the Spanish Civil War, a tragedy that leaves his life – and the fate of his country – forever changed. Together with his sister-in-law, the pianist Roser, he is forced out of his beloved Barcelona and into exile.

When opportunity to seek refuge arises, they board a ship chartered by the poet Pablo Neruda to Chile, the promised 'long petal of sea and wine and snow'. There, they find themselves enmeshed in a rich web of characters who come together in love and tragedy over the course of four generations, destined to witness the battle between freedom and repression as it plays out across the world.

A masterful work of historical fiction that soars from the Spanish Civil War to the rise and fall of Pinochet, A Long Petal of the Sea is Isabel Allende at the height of her powers.

Divascribe
5,0 van 5 sterren A great story of love and survival
7 september 2019 - Gepubliceerd op Amazon.com
Vine-klantenrecensie van gratis product( Wat is dit? )
Over the years, I've read most of Isabel Allende's books. Some I've liked, others not so much. This one I really enjoyed.

As she says in her acknowledgements at the end of the book, Allende mined her own family stories to create the framework for this novel. It starts during the brutal Spanish Civil War in the 1930s and ends in the 1990s in Chile. While there are a number of major, well-drawn characters, the focus of the book is a couple who made a "marriage of convenience" in order to flee to Chile at the end of the Spanish Civil War. They favored the losing side, and it wasn't safe to stay.

After a dangerous flight over the French border and near starvation in refugee camps, Victor Dalmau, a medic, and Roser Bruguera, is a young pianist who was taken in by Victor's parents, are able to reach Chile. Roser is pregnant by Guillem, Victor's brother and a fighter in the Civil War. But when it comes time for Victor and Roser to escape, Guillem has not been heard from for some time and is feared dead. In order to emigrate, the couple have to marry. So they agree on a marriage of convenience, and take a boat with thousands of other refugees to Chile.

All of that takes up about the first half of the book; the rest is about their experiences over the decades in South America. There are quite a few twists of fate, due to their own restless hearts and also because of the precarious political situation that develops in the country. But through it all, the pair do their best to survive, for their own sakes and that of Guillem's son, Marcel.

Isabel Allenda is a marvelous storyteller. Her prose is spare but descriptive, and she keeps the plot moving through more than 50 years of history. This is one of my favorites of her books.
Meer lezen
55 mensen vonden dit nuttig
Vertaal recensie in het Nederlands

Kindle Customer
5,0 van 5 sterren Lovely historical fiction
27 januari 2020 - Gepubliceerd op Amazon.com
Geverifieerde aankoop
I have read lots of historical fiction but never about the Spanish revolution or about Chile. The story did a great job of introducing both to me. The story itself was quite satisfying. In addition to being well written and well researched, I greatly enjoyed the story. Thus the five stars.
Meer lezen
17 mensen vonden dit nuttig
Vertaal recensie in het Nederlands

Viviane Crystal
5,0 van 5 sterren Becoming Strong and Loyal through Adversity
28 januari 2020 - Gepubliceerd op Amazon.com
Geverifieerde aankoop
Roser and Victor Dalmau agree to marry in Spain after General Franco wins control of the government over the Republicans in the late 1930’s. Roser’s husband died during that conflict and his brother Victor, who learned to be a doctor during the Civil War, is determined to get them out of Spain as Franco’s government is tyrannical and devastating to millions. This novel is their story. What starts as a brother-sister relationship will develop into a phenomenal, glorious love.

Their journey will take them to France, Chile and Venezuela. Governments in those countries were also in flux. Before they get there, Victor has a brief fling with a spoiled, aristocratic Spanish woman. She has a child who is given up for adoption, a fact Victor never learns until he is much older. Victor becomes a good friend of Pablo Neruda the poet, who writes a poem about Chile, written on the ship called “Winnipeg” that gives this novel its title. Pablo is a Socialist and becomes persecuted and hunted because of his political beliefs; but it turns out he is mainly concerned with the love of people and freedom. He is responsible for two thousand refuges being allowed to emigrate from Spain to Chile. These refugees soon develop a fine reputation for being responsible families who improve conditions in Chile.

This is a family saga about those who face constant trials but do their best to work hard and avoid controversy. Their debacle in each of these countries is heartbreaking. Victor becomes a tough man as he experiences the horrors of war which he experienced as a medic and later as a doctor in Chile. Allende’s earlier novels are more about the Pinochet government in Chile but here we also get a glimmer of the military horrors creating suffering and death for far too many.

Victor earns a reputation as an intelligent, capable and kind cardiologist. Rosa is pragmatic, hard-working and loyally protective of Victor. His vanity is shattered when his love Rosa becomes terminally ill.

What is unique about this family saga is how positive these characters are even in the face of the most daunting challenges. It’s a beautiful tribute to the power of love and loyalty, faith and hope in mankind no matter what the prevailing political challenges and, like the title poem, a tribute to beautiful people and lands prevailing in victory even when caught in the prevailing tides and currents testing the mettle of those riding the formidable journey into a more hopeful existence.
Meer lezen
11 mensen vonden dit nuttig
Vertaal recensie in het Nederlands

Antoinette
5,0 van 5 sterren The Master Outdoes Herself
14 september 2019 - Gepubliceerd op Amazon.com
Vine-klantenrecensie van gratis product( Wat is dit? )
I believe Isabel Allende to be one of the greatest writers of our time. Her words are like the smoke of incense that wraps itself around you and leaves a lingering perfume. This book comes at a time when the "othering" of refugees has reached a critical point. It is about love, loss, the power of hope and yearning for home. It's a sweeping epic that spans six decades. It is both timeless and timely. It is quite possibly her best work to date.
Meer lezen
27 mensen vonden dit nuttig
Vertaal recensie in het Nederlands

Doug D.
4,0 van 5 sterren Great Historical Novel
8 februari 2020 - Gepubliceerd op Amazon.com
Geverifieerde aankoop
As an historical novel, A Long Petal Of The Sea was great. Practically speaking, the two main characters of the story were really Chile and Spain. The author gives a really good contrast and comparison of the two countries, particularly how they each responded to conflicts between liberal and conservative groups. It was very interesting and I learned a lot.

Ironically, the only weakness of the book was the lack of weakness of the main human characters: Victor and Roser. They were unrealistically competent at everything they did. And, they were unrealistically good people. The lack of human weaknesses made them difficult to relate to. Even the one apparent moral lapse of Victor turned out to be a blessing by the end of the book. (I won't say what, so I won't spoil the plot.)