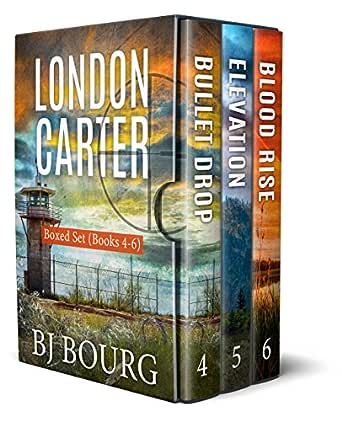 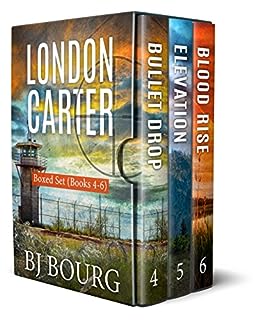 Available as a boxed set: Books 4 - 6 of the London Carter Mystery Series by BJ Bourg

While Dawn Luke travels to her hometown of Arkansas to tend to her sick mother, London Carter is called upon to investigate the murder of a young teenager whose body is found stuffed under the exit ramp of an overpass. It was apparent to London that the murderer wanted to make sure the kid was dead, but the motive for the killing was far from obvious.

Summoning the assistance of Detective Rachael Bowler, the two are finally able to locate the actual crime scene and that leads them to the identity of their young victim. But instead of providing answers, the identification leads to more questions. Could a secret involving the young man lead them to the killer, or will it only muddy the waters and interfere with their investigation?

Whatever the case, this is one killer no one should take for granted--not even a cop as skilled and gritty as London Carter.

Vice President Courtney Browning is adored by the majority of all Americans and is heiress apparent to the White House, but someone wants her dead. When she holds a rally in Magnolia Parish early one morning in May, London Carter and his snipers team up with the Secret Service to assist them in providing over-watch protection for the event.

What begins as a routine rally turns into a bloodbath that leaves three people dead and a dozen others wounded. However, thanks to London’s quick thinking and decisive action, the body count is much lower than it could have been.

As London tries to avoid the ensuing publicity surrounding the national event and get back to his normal duties, he’s called upon to investigate a strange break-in at a residence in Seasville. There aren’t many clues to decipher, but as he digs deeper into the case, it begins to appear someone might be after the woman he loves.

Can he find and stop the forces that are moving against Dawn Luke, or will he end up with another hole in his heart that’s too big to fill?

In the final book in this series, London Carter has planned the perfect surprise vacation for Dawn Luke. They’re heading to the Smoky Mountains National Park, where he’ll drop down to one knee in front of Abrams Falls and propose to her. However, when a grisly discovery is made in a small community within Magnolia Parish, they’re forced to return home to investigate.

They soon learn that the victim, Kathleen Bertrand, has been killed in the most heinous manner imaginable, and they delve into her past looking for anything that might help explain what happened. They locate some skeletons in her closet and, while one of them might be motive enough for murder, the brutal nature of the crime doesn't seem to fit.

As Dawn and London drive to the Gulf Coast town of Dark Sands, Mississippi to follow-up on a piece of evidence they discovered in Kathleen’s car, Deputy Abraham Wilson is called to investigate the disappearance of another Plymouth East woman. Fearing the cases are connected and the second victim might suffer the same fate as the first, they work nearly nonstop to bring the killer to justice.

No one knows if they’ll locate the victim in time to save her, but it’s clear London won’t be dropping down to one knee anytime soon--unless it’s to take a shot.
click to open popover

I absolutely loved this book! There was so much reality and it was well written. Bullet Drop touched on some issues that are relatable to some. From Dawn dealing with her mom’s cancer to police issues with minorities. These situations coupled with the current investigation all make for a great read.

You will never know who the killer is until BJ Bourg wants you to know. Not only is Bourg knowledgeable about everything he writes, he also knows how to pull you into his story. He knows how to get you lost in the plot twists and turns. I dropped my phone several times while reading Bullet Drop due to being shocked and surprised when some pivotal moments were revealed.

I strongly recommend you start from the first London Carter Boxed Set. This includes books 1-3. Bullet Drop is actually Book 4, which is in the second boxed set. I feel like BJ Bourg continues to get better with this series.

If you like crime fiction, crime drama, or crime mysteries, do yourself a favor and check out The London Carter Series! You will be taken on an intense ride through southwest Louisiana. These books are gritty, yet fun. BJ Bourg does not hold back, but this series still has a lighthearted feel to it.

I don’t know how it keeps getting better, but it does! BJ Bourg has yet to disappoint in The London Carter series. Reading “Elevation” was just like watching a movie. Bourg left me speechless several times throughout this book.

Bourg really knows his stuff. Being a veteran of law enforcement and having an incredible imagination he perfects novel writing in this genre. The element of surprise is there. Great dialogue, and character development are also present. He does a great job as an author painting the picture for you. You always feel like you are not too far from the action.

The plot was set up perfectly! Families are being held hostage. Someone wants the Vice President dead. Dawn is with her dad in the mountains pretty much off the grid. Miles and restrictions separate London and Dawn. With so many finely crafted plot twists in place this book doesn’t deserve to only be read once!

As always you will be in for some excitement. There is more sniping in this book than the past two or three. We still see gradual growth and development in the main characters. Bourg did an excellent job in molding London in this book. He illustrates how human our hero Mr. London Carter really is.

If you’ve made it this far, get ready to be on the edge of your seat and turning pages quickly. You must read this book. If you are just finding this book, and haven’t read books 1-4, get the box sets, and prepare to do some binge reading!

I recommend this book to anyone who enjoys action, suspense, and mystery. If you are into all things law enforcement, this is your book!

No one did it, but everyone is a suspect! There are so many secrets and lies in this book, I don’t know how Bourg kept them all straight!

What a great way to end a series!! The sixth, and final book of BJ Bourg’s London Carter series, is everything you could want in a series finale. I don’t give spoilers, or even a summary.

The London Carter series has covered several different types of murders, but Blood Rise has taken murder mysteries to a new level. Without being too graphic, and not graphic enough, Bourg has managed to give the readers the perfect amount description to keep you reading.

Bourg did not hold back in Book Six of this series. He maintained character development, perfect dialogue, accurate information regarding law enforcement procedures, and a storyline that keeps the reader engaged throughout. I feel like Bourg covered so much in one book. There are so many major points, but also some minor points that create such a great read.

If you are a fan of crime mysteries or crime suspense, do yourself a favor and check out The London Carter series. Even if you aren’t a big reader, and you are just a fan of all things crime, you will not be disappointed!

T. Willardson
4,0 van 5 sterren Engaging story
3 mei 2018 - Gepubliceerd op Amazon.com
Geverifieerde aankoop
This book has an engaging story and characters that you care about but there are notable places where it appears to have been written and proofread in a hurry. Or, maybe not proofread at all.
Meer lezen
11 mensen vonden dit nuttig
Vertaal recensie in het Nederlands

Amazon Customer
5,0 van 5 sterren Enjoyable reading full of suspense
26 april 2019 - Gepubliceerd op Amazon.com
Geverifieerde aankoop
Very well written. Keeps you in suspense. One of my favorite authors to date. Have read books 1-6 of this series and will read any others that may come along by B J Bourg. I especially appreciate the fact that he makes these books very interesting without using all the foul language that most authors feels necessary to include.
Meer lezen
7 mensen vonden dit nuttig
Vertaal recensie in het Nederlands

Mary McDonald
5,0 van 5 sterren Author Draws You In
3 maart 2019 - Gepubliceerd op Amazon.com
Geverifieerde aankoop
Don't start reading the London Carter series. Why? Because once you start you will be hooked and not stop reading until you have read the entire series. I read Box Set 1-3 and then continued with Box Set 4-6. Characters flow from one set to the next - reeling you in and keeping you on edge, anxious for the next surprise twist. I could figure out a couple of killers and twists (ahead of story reveal). The author's easy style of writing makes the reading fast and easy; and he draws you in so much that you are right there with the characters. The London Carter series kept me riveted and wanting more.
Meer lezen
5 mensen vonden dit nuttig
Vertaal recensie in het Nederlands

Amazon Customer
5,0 van 5 sterren Couldn't put down
2 mei 2019 - Gepubliceerd op Amazon.com
Geverifieerde aankoop
I have never read an author like this one. just when I though I had it figured out....I didn't. He keeps you guessing until the end. These books are addictive. I hope he never gets rid of these characters. I simply could not put it down. Once I started a book I had to finish it.
Meer lezen
4 mensen vonden dit nuttig
Vertaal recensie in het Nederlands
Ga naar Amazon.com om alle 94 recensies te bekijken 4,6 van 5 sterren
Terug naar boven
Over ons
Verkoop bij ons
We helpen je graag
© 1996-2020, Amazon.com, Inc. en dochterondernemingen