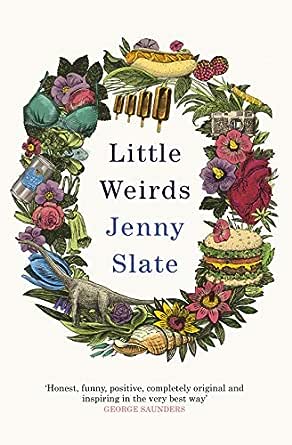 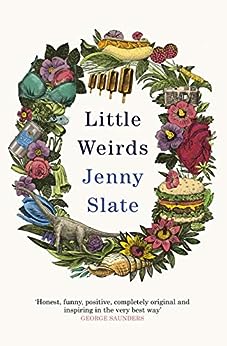 'It made me remember I was alive' - George Saunders

To see the world through Jenny Slate's eyes is to see it as though for the first time, shimmering with strangeness and possibility. As she will remind you, we live on an ancient ball that rotates around a bigger ball made up of lights and gases that are science gases, not farts (don't be immature). Heartbreak, confusion and misogyny stalk this blue-green sphere, yes, but it is also a place of wild delight and unconstrained vitality, a place where we can start living as soon as we are born, and we can be born at any time. In her dazzling, impossible-to-categorize debut, Jenny channels the pain and beauty of life in writing so fresh, so new and so burstingly alive, we catch her vision like a fever and bring it back out into the bright day with us, and everything has changed.

FilmMuse6
2,0 van 5 sterren Jenny Slate > Little Weirds
6 november 2019 - Gepubliceerd op Amazon.com
First I'd like to say that I really like Jenny Slate and her work as an actress and comedian. She's funny, weird and embraces her odd-ballness and that's great. This book, however- is just TOO WEIRD to really get into. I love essays and creativity and symbolism and metaphors and all that fun stuff but this book takes all of those to a whole other level that is just TOO, TOO MUCH to enjoy. I wanted to like this book, I purchased it right away without reading even a single review (my mistake) and midway through I realized that this was an impulsive buy and not something that I would find much substance within. I think Jenny Slate missed a great opportunity here-- she could have taken her weird writing down about 10 decibels and written some truly great personal essays. I would have liked to hear more normal versions about her haunted childhood home, her breakups, friendships and especially her relationship with Chris Evans (along with every other red-blooded American woman) and less of her kissing rabbits. A lot of WTF reading going on in this one. Just because you get a creative burst to write when you're stoned out of your mind, doesn't mean you should get published.
Pass on this one.
Meer lezen
98 mensen vonden dit nuttig
Vertaal recensie in het Nederlands

Kelly Garbato
4,0 van 5 sterren This book is emotional murder.
5 november 2019 - Gepubliceerd op Amazon.com
I was born in the stacks in the Columbia University Library. I was born in shin-guards on a soccer field on a chilly little Saturday morning in the 1980s and I was too scared to even feel the sting of the ball on the inside of my shoe. I was born during tennis. I was born as a backyard swimming pool and my twin sister is an orange Popsicle and my mother is a bowl of pickles and my father is a hamburger.
(“I Was Born: The List”)

I think, Well, I am so sensitive and I am very fragile but so is everything else, and living with a dangerous amount of sensitivity is sort of what I have to do sometimes, and it is so very much better than living with no gusto at all. And I’d rather live with a tender heart, because that is the key to feeling the beat of all of the other hearts.
(“Kinship”)

There was a time before Patriarchy.
We have a better origin story and it is not widely spoken about but it is the truth.
(“The Code of Hammurabi”)

Y’all. I can’t even tell you how much I wanted to review LITTLE WEIRDS using nothing but Mona-Lisa Saperstein gifs. Alas, Jenny Slate is nothing like Jean Ralphio’s sister from the same mister, and most of said gifs are totes wrong for this review. But I have to get them out of my system, so. Let’s just dive right in, shall we?

[If you were reading this review on my blog, this is where you’d see eight million and three Mona-Lisa gifs.]

(Note to self: It’s about time for your annual PARKS & REC rewatch. Your emotions are in serious need of fortification.)

Prior to discovering LITTLE WEIRDS on Edelweiss (at which point I legit let out a little squeal and did a happy happy butt dance on my office chair), my knowledge about actor/comedian Jenny Slate could be summed up thusly: 1) she portrayed Mona-Lisa Saperstein with brilliance and aplomb on one of my all-time favorite sitcoms, PARKS & RECREATOPN (for reals, I even dedicated a whole VeganMoFo to it!); 2) she dated everyone’s favorite Chris (Evans, duh!); she’s Jewish; and 4) she’s been at the receiving end of some really gross antisemitism, on account of nos 1-3, i.e., being a Jewish lady who played a Jewish lady and also dated literal Captain America while Jewish, and also because our country is a dumpster fire of white nationalism and toxic masculinity.

I started to type “But I digress…,” and then it hit me that this isn’t a digression at all; Slate does touch upon some of these issues, however tangentially, in LITTLE WEIRDS. But mostly the subject matter is so very much stranger, ethereal, and curious than this. In a word, *weird*.

As the synopsis promises, inside this book you will find: The smell of honeysuckle; heartbreak; a French-kissing rabbit; a haunted house; Death; a vagina singing sad old songs; young geraniums in an ancient castle; Birth; a dog who appears in dreams as a spiritual guide; divorce; electromagnetic energy fields; emotional horniness; and the ghost of a sea captain.

You can also look forward to: gossip; an old dog who flits in and out of each essay like a specter, or a faithful friend; a tragic accident involving a deer and a tennis court; emotional emptiness; metaphors galore; whimsy and sorrow; a cage match between optimism and cynicism; aliens; alienation; letters; prophecies, or maybe wishes; being mansplained to death; terminology from the 1920s (“peepers”! I love it!); and a pit (oh, how I want for this to be a throwback to PARKS & REC!).

Basically, I cannot think of a book with a more perfectly fitting title than LITTLE WEIRDS. This quirky collection of essays is simply enchanting. You’ll laugh, you’ll cry, and – before you even know what’s happening – you’ll find yourself delving into some deep and scary, long-hidden and even liberating places. Some of these essays are prescient AF, and sneakily so. Like, ending this collection with “I Died: Bronze Tree,” followed by “Dog Paw,” is emotional murder.

“I died and I have to move on soon, but I will always be so glad for the life I had with you. The fact is that it is incredibly hard to RIP and I’m just not sure I can get it done. Because what will I be now? I know that we will have new life with new forms and that we won’t be able to love each other like we did the last time. Maybe I am going to be a banana and you will be a car. It just won’t work. I know that. And I’m not one to beg for the impossible, especially as a banana, but I can’t seem to stop reacting to the enormity of the final end of us, sweetheart.”

LITTLE WEIRDS is the kind of book best devoured in small bites. You’ll find yourself offering the book a permanent, cozy home by your bedside; lovingly bookmarking certain chapters, so that you can return to them after an especially excruciating day, or perhaps those nights when you foresee a challenging week ahead. Kind of like the literary equivalent of keeping PARKS & REC (and THE OFFICE, SCHITT’S CREEK, and THE GOOD PLACE) on your Netflix list even though you’ve watched them a dozen times by now.
In short, you should give Jenny Slate all your money please.

I did it! I worked a Mona-Lisa gif in organically!
Meer lezen
48 mensen vonden dit nuttig
Vertaal recensie in het Nederlands

Erin Ryan
5,0 van 5 sterren "My Jewels!"
8 november 2019 - Gepubliceerd op Amazon.com
Geverifieerde aankoop
This is the first book I've ever pre-ordered in my life, and it was extra-exciting receiving it out of the blue. I heard Jenny read a chapter of this at a show in Boston and have thought about that chapter many times since.

It's a book of essays, but it feels like its own genre. She fully describes herself as a warm croissant down to the specifics of the french country kitchen in which she was baked. Not in a simile like "oh I'm just like a croissant" but in a metaphor like, "I AM this specific croissant." In the next chapter, she moves right along to something new. I love this approach. Each chapter is a little gem, a weird if you will, and it's just her speed. Delightful. Down to earth and very very far above earth in the best way.
Meer lezen
22 mensen vonden dit nuttig
Vertaal recensie in het Nederlands

lila bug
5,0 van 5 sterren Silly and Lovely
6 november 2019 - Gepubliceerd op Amazon.com
Geverifieerde aankoop
Jenny Slate is my favorite person, but I do understand that she is not everyone’s favorite person and I respect that. Watch her new Netflix special for a taste of what’s to come in this book. If you don’t like it, you probably won’t enjoy the read! As a young, jewish stoner with a very similar sense of humor to Jenny, I find this book hilarious and charming. She views the world with childlike wonder that is both refreshingly honest and painfully silly. It makes me giggle and snort and sometimes tear up at how wonderful she can be. I am in love with you Jenny Slate, and I am so overjoyed to know that there is someone else out there whose heart sings just like mine.
Meer lezen
21 mensen vonden dit nuttig
Vertaal recensie in het Nederlands

Alexandra Saperstein
5,0 van 5 sterren Only order this book if you want to fall in love with another writer.
9 november 2019 - Gepubliceerd op Amazon.com
Geverifieerde aankoop
I pre-ordered this based on a review I read and wow, it certainly did not disappoint. Such unusual, at times quirky, at times very moving and touching, elegant stories on so many varied themes and topics. Absolutely loved it, and highly recommend if you are in the mood for beautiful,rare, totally original stories and essays.
Meer lezen
16 mensen vonden dit nuttig
Vertaal recensie in het Nederlands
Ga naar Amazon.com om alle 66 recensies te bekijken 4,1 van 5 sterren
Terug naar boven
Over ons
Verkoop bij ons
We helpen je graag
© 1996-2020, Amazon.com, Inc. en dochterondernemingen