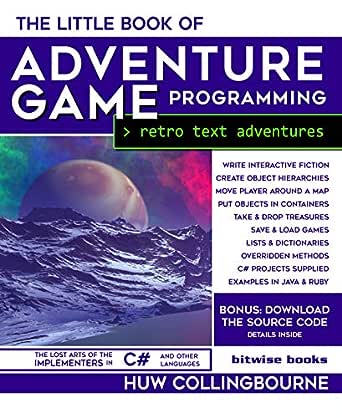 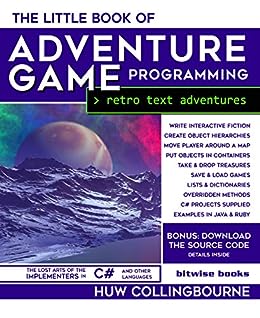 Learn the lost arts of the game implementers as Huw Collingbourne (author of the cult adventure game, The Golden Wombat Of Destiny) explains exactly how to write an exploring-style adventure game. All the source code can be downloaded from from the Bitwise Books web site (www.bitwisebooks.com).

The Little Book Of Adventure Game Programming provides a step-by-step guide to creating a game in C#, which is one of the most important languages on Windows and is also available on macOS and Linux. The programming principles and techniques explained in the book can also be used to write adventure games in other languages such as Java, Ruby or Object Pascal. Short examples (source code also available for download) are provided in those languages. As well as teaching adventure games specifically, this book can also be used as a tutorial to writing C# programs. It covers all the most important features of the C# language.

Whether you are new to programming or an old hand, this book will challenge you to expand your programming expertise while coding a really fun programming project. The programming topics covered include: list structures and dictionaries, streaming and serialization, object hierarchies, constructors, exception-handling, enums, generics and much more. This book may also complement standard C# tutorials (such as our other title, The Little Book Of C#) by taking you through the development of a complex project containing multiple source code files, partial classes and collections of objects.

The Little Book Of Adventure Game Programming gives you just the stuff you really need to get straight to the heart of text adventure programming without all the fluff and padding.