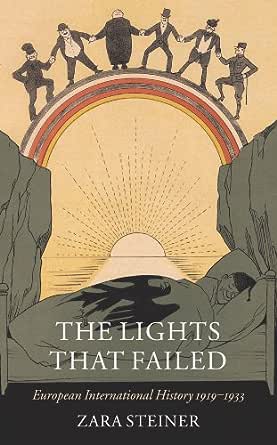 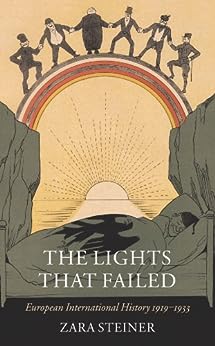 In a second volume, The Triumph of the Night , Steiner will examine the immediate lead up to the Second World War and its early years. - ;...indisputably the most detailed and authoritative single-volume account of European international history in the fifteen years following the end of the Frist World War...[this work] affirms Zara Steiner's status as the pre-eminent historian of inter-war international affairs. - Martin Conway, EHR 494;Zara Steiner has produced a splendid volume, chock full of detail and with many thought-provoking insights. It will remain a classic for many years to come. For those studying international business history it will serve as an excellent background reference manual to the period... If one were to ask for more it would be the second volume in the same vein. - Derek H. Aldcroft, Business History;Zara Steiner's work has ensured that we will have to treat that neglected decade [the 1920s] with proper respect. She has told the story with impeccable scholarship, clarity and compassion ... Her book will rightly become the definitive work on the period. - Margaret MacMillan, TLS;... impressive - David Stevenson, LRB;...majestic and authoritative volume...The Lights that Failed skillfully and judiciously deploys the fruits of extensive reading and long reflection ... Embedded in its comprehensive survey of the main protagonists and themes is a radical and fascinating argument... - Mark Mazower, BBC History;Any reader who wants to understand the inter-War period should consult this book and any serious student of the period should buy it. For there is simply nothing to compare with it in terms of erudition or exposition. Above all Zara Steiner ensures that we read history forward not backward. - The Independent;a dazzling account...This combination of human drama and a broad international perspective, shifting between western, eastern and Atlantic viewpoints, is a governing strength of the narrative, at once providing fascinating detail, balance, and vivid variety of pace and content. Steiner's long, wise view of international relations during the last epoch when western Europe confidently believed itself the centre of the world is compelling reading for anyone concerned with the
continent's past - or future. - FT Magazine;...this is quite clearly a standard of work which is unique in the research landscape and will continue to hold this position for years to come. - Eckart Conze, German Historical Institute Bulletin, Vol. XXIX, No. 1
click to open popover

D.V. KOKKINOS
5,0 van 5 sterren Serious,Profound and Incisive work
16 juli 2014 - Gepubliceerd op Amazon.com
Geverifieerde aankoop
From the extensive reading that I have done on the subject, this is the most complete compact work done that covers and analyzes all principal parameters that shaped the post- first WW environment. It is a truly holistic approach that is not written from a national point of view but rather for the the detached and very observant one. It is to be admired that the book,although relatively short,is inclusive of all main aspects of this unstable era,full of hope initially but with the germs of destruction already there as the author ably demonstrates .it is remarkable that the author avoids secondary issues,even interesting ones,in a successful effort to keep the text coherent.
The book is in two parts. The first part examines how the Statesmen of West and East,in Versailles and afterwards,reconstituted differently the remains of Europe after the collapse of empires and the new international regime that emerged as a result.
The book clarifies in a well organized method all the principal questions about this era and explains how Europe reconstituted herself in new Nations and new regimes in old Nations and the interplay between them. It shows the beginning of the inherent instability of the resulting international order.
In the second part of the book,that the author names aptly "The hinge years" 1929-1933 the inherent instability of the new order started to give theFirst serious indications of collapse mainly but not only due to the great Economic Depression.
In the conclusion of the Hinge Years,which is the strongest and most memorable part of this book,in the authors own words:
"The Hinge Years of 1929-1933 witnessed the threat to the hopes and institutions,nurtured during the previous decade and the collapse of many of them"
The book is written in a simple but elegant prose and is admirably documented.
If one reads only one book on this period, this is it
DVK

R. Albin
5,0 van 5 sterren Superb
26 december 2015 - Gepubliceerd op Amazon.com
The first volume of an outstanding pair of books surveying interwar Europe. Individually, each of these books is excellent. Put together, this is an outstanding achievement. The major goal of both books is to describe and analyze international relations in Europe between the 2 worlds wars. Diplomatic history is the central armature of these books, but both are considerably more than diplomatic history. Steiner covers major economic and political trends well and reaches outside the European frame when necessary to understand European events.

The Reconstruction section begins with an even-handed description and analysis of the Paris Peace conference stressing that the Versailles treaty was not an unbearably punitive treaty but also discussing the many shortcomings and contradictions of the Paris Peace process. The final settlements left many, many dissatisfied parties, including some of the ostensible victors, such as Italy. Steiner has excellent discussions of the complex events in Eastern Europe that followed the official end of WWI and the consequences of the emergence of multiple new states in Eastern Europe. The following series of chapters lay the efforts to reconstruct a viable European state system, reconstruct the global financial system that had been destroyed by WWI, and resuscitate the economies of the older and newer European nations. One important elements include the drive for revision of the Paris settlements by many parties, including Germany, the USSR, Italy, and quite a few Eastern European nations. Other crucial elements include the persistent French drive to obtain security guarantees, British reluctance to grant such guarantees, the critical importance of the USA but abstention of the USA from many aspects of policy-making, efforts in several nations to resume the gold standard and its consequences, the outsider status of the USSR, the major problems of reparations and war debt repayment, and the political and economic mess that was Eastern Europe.

Steiner's narrative of efforts to deal with these problems is lucid, deep, and compelling. Despite many obstacles, she shows that some real progress was made during the 1920s. The Versailles settlement had been revised without (much) violence, and there were somewhat successful efforts to use international and multilateral fora to resolve disputes. Nonetheless, there were continued major problems and the onset of the Great Depression would expose these structural flaws and bring new problems. In the final section of the book, The Hinge Years, Steiner describes the demise of efforts to produce a relatively open economic order, internationalism and multilateralism in diplomacy, and the beginnings of rearmament. This sets the stage nicely for the next volume - The Coming of the Dark.

The depth of research and quality of writing are first-rate and this book has some nice additional features. Each chapter is followed by a set of relevant additional readings and the bibliography is impressive. There are appendices with relevant statistical tables and a nice timeline of important events.
Meer lezen
5 mensen vonden dit nuttig
Vertaal recensie in het Nederlands
Ga naar Amazon.com om alle 4 recensies te bekijken 4,7 van 5 sterren
Terug naar boven
Over ons
Verkoop bij ons
We helpen je graag
© 1996-2020, Amazon.com, Inc. en dochterondernemingen