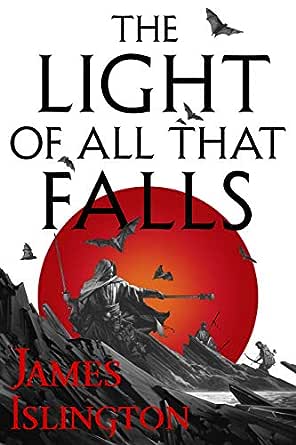 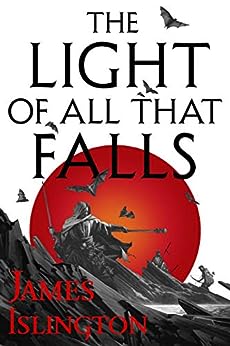 The Light of All That Falls: Book 3 of the Licanius trilogy (English Edition) Kindle-editie

"Islington's magic-soaked setting has plenty of opportunities for conflict between competing powers even as earth-shattering evil approaches. Epic fantasy fans will enjoy this dense, suspenseful adventure."--Publishers Weekly on An Echo of Things to Come

"Ingeniously plotted...Islington's natural storytelling ability provides incessant plot twists and maintains a relentless pace...A promising page-turner from a poised newcomer."--Kirkus on The Shadow of What Was Lost

"Love The Wheel of Time? This is about to become your new favorite series."--B&N SF & Fantasy Blog on The Shadow of What Was Lost

"Reminiscent of Robert Jordan or Brandon Sanderson, Islington's writing is refreshingly fast paced, with a light and clever touch."--Booklist on An Echo of Things to Come

"Fans of this genre will find themselves immersed in the magical battles, suspense and backstabbing political intrigue."--RT Book Reviews on An Echo of Things to Come

"Islington has built a world with all the right genre elements: complex magic, terrifying threats out of legend, political intrigue, and a large cast of characters whose motivations are seldom clear. Fans of doorstop epic fantasy will not be disappointed."--Publishers Weekly on The Shadow of What Was Lost

"Storytelling assurance rare for a debut . . . Fans of Robert Jordan and Brandon Sanderson will find much to admire."--Guardian on The Shadow of What Was Lost

"The plot twists are unexpected, the world building is fascinating, and the fledgeling love story is a charmer.... This sweeping and compelling epic is ripe for a sequel."--Booklist on The Shadow of What Was Lost

James Islington's bestselling debut The Shadow of What Was Lost began an epic tale of three friends who embraced forbidden powers to confront an ancient evil. The adventure continued in An Echo of Things to Come as armies clashed and magic collided. Now the final battle - and the fate of the world - is at hand in The Light of All That Falls, the gripping final volume in the Licanius trilogy.

Praise for the series:

The Licanius trilogy:
The Shadow of What Was Lost
An Echo of Things to Come
The Light of All That Falls

Vagabond of Letters
5,0 van 5 sterren Read it
14 december 2019 - Gepubliceerd op Amazon.com
Geverifieerde aankoop
5/5. Absolutely brilliant. There has been a slew of top-in-show novels recently. Alternately, the fact that I'm only reading continuing series and not utter gender-agenda'd postmaterial leftist - but new - trash like *Priory of the Orange Tree* means I'm just selecting the best of the best for reading in the first place. In either case, 1. My average review is going up, but this is not grade inflation; and 2. A sharply increasing polarization in literature, both in political view ('literary' fiction and Amazon picks have been fully converged for years) and in standards of quality: for every Islington, there's a Jemisin; for every Goodkind, a Scalzi; for every Lawrence, a Shannon.

This book is on the first side of that divide. It is the chiefest work on that side. It is incomparable in fantasy.

Nevertheless, after just having given *The Burning White* a glowing review and having called it the capstone of a good series - a capstone so well-formed that it turned that good series in to a great series, to quote, 'the best fantasy series published this millennium', a few weeks later it must at least share the throne, if it has not been forced to abdicate.

This tour-de-force trilogy is a series of extended meditations on memory, freedom, determinism, responsibility, personality, philosophy of mind, time travel, contingency and necessity, degeneracy, and true religion, couched in a fantasy of the highest caliber, with unpredictable but never-forced plot twists and character development that rivals a Pynchon, Wolfe, or Bret Easton Ellis and without betraying the slightest hint of propagandistic preachiness. Follow Davian and Caeden, Asha and Wirr and all the ensemble as they learn true honor, true sacrifice, legitimate doubt, unblind faith, zealots both evil and good on both sides of the truth, Solzhenitsyn's line dividing good and evil running through every heart, and the meaning of justification over against rationalization and vice versa.

Evan Rose
5,0 van 5 sterren A Trumpth
12 december 2019 - Gepubliceerd op Amazon.com
Geverifieerde aankoop
I am worried that if I express my true praise for this book it would come off as hyperbolic and excessive. And on the other hand, I don't think I could even put into words how much I was captivated by the final book in an fantasy worthy of the term "epic".

The Light of All That Falls completes James Islington's debut series I a way I was worried that he could never deliver on. Islington wrote his series with such ambition, such scope, and with intense moral weight that I doubted a satisfactory conclusion could be reached. But he did it anyway. Character arcs with such gravity I have rarely read outside of what is now regarded as the classics. I am not ashamed to say that while reading my throat chocked and my eyes watered; that is how powerful Islington's dialogue, prose, and narrative captivated me. He also writes with respect to the reader, allowing mysteries to develop and leave clues in the writing that while are not bold will allow attentive readers to uncover truths before characters that possess the lack of the reader's insight.

If I must state any negatives for the sake of being honest it would only be a slight distaste for some 11th hours developments that solve problems.

But that ending... I won't even try to capture amazement. Islington has made it almost a staple of the series that the ending provides a mass revalation that changes the entire reading of the series to that point. And for the conclusion to the story, Islington perhaps delivers one his best in the epilogue.

In 2019, the year that brought us many great fantasy; I will remember The Light of All That Falls as my favorite of the year. I eagerly await Mr. Islington's next work and would happily recommend the Licanious Trilogy to all interested in the newest voices in fantasy.
Meer lezen
14 mensen vonden dit nuttig
Vertaal recensie in het Nederlands

Amazon Customer
3,0 van 5 sterren Review of the entire series.
25 december 2019 - Gepubliceerd op Amazon.com
Geverifieerde aankoop
Three stars... almost gave him one star because he ought to know better...but that would have ignored the many hours he put into this. Of course, I paid money for these books and so he got better than stars from me anyway.

I see that reviews so far have all given this series 5 stars. I am bemused by this. Firstly, this series has almost every no-no in the writer's handbook: It is filled with flashbacks, which means we already know the outcomes; any number of "Jack the explainers" because most of it doesn't make much sense; so much skipping from character to character we never feel a deep connection or concern of any of them in particular. We are "told rather than shown". He writes pages and pages in italic. And, he starts out with prologues instead of starting the novels where at the beginning. I guess this is because the author does not really understand what purpose a prologue serves if it is necessary at all.