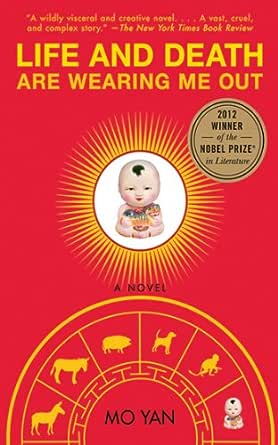 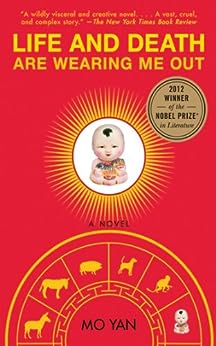 Life and Death Are Wearing Me Out (English Edition) Kindle-editie

"A wildly visceral and creative novel . . . A vast, cruel, and complex story."

A wildly visceral and creative novel . . . A vast, cruel, and complex story.

The Newman Prize–winning “wildly visionary and creative novel” of modern China from the Nobel Prize–winning author of Red Sorghum and The Garlic Ballads (The New York Times).

In this “epic black comedy,” benevolent landowner Ximen Nao is less than pleased to find himself in the underworld after being killed in Chairman Mao’s land reform movement. And even though he’s unwilling to admit to any wrongdoing, he is soon punished by being sent back to the mortal realm . . . as a donkey, an ox, a pig, a dog, a monkey, and so on (Kirkus Reviews).

But in each of his reincarnations, Nao experiences another defining event in China’s maddening national transformation under the heavy hand of Communism—such as the Chinese Famine, the ever-changing Cultural Revolution, and the devastating failure of the Great Leap Forward. And in each new life, he finds both the humanity and the insanity of his burgeoning homeland.

With this “exuberantly imaginative” novel, China’s most revered, renowned, and feared literary artist proves once again that the only true freedom is the freedom of the heart and mind (Washington Post).
Alle bekijken
click to open popover

Karl Janssen
4,0 van 5 sterren Tragicomic family saga of 20th-century China
31 oktober 2017 - Gepubliceerd op Amazon.com
Geverifieerde aankoop
Life and Death Are Wearing Me Out, published in 2006, is a historical novel by Chinese writer Mo Yan, who won the 2012 Nobel Prize in Literature. It chronicles the lives of one Chinese family through the second half of the twentieth century, but it is far from a conventional period epic. In fact, it is likely to be one of the oddest novels you’ll ever read.

The story is told as an extended conversation between two narrators, one of whom on several occasions dies and undergoes reincarnation. Ximen Nao is a landowner in the agricultural district of Northeast Gaomi Township. He is a wealthy and respected member of the community until the Communist Revolution, when he is executed so his land can be redistributed. When the novel opens, Ximen Nao is in the underworld, being tortured by the demon minions of Lord Yama, the judge in charge of assigning reincarnations. His soul is sent back to Earth in the body of a donkey, born in the very same village where he previously resided. While a donkey, he maintains some of his human intelligence and is able to observe and interact with his descendants and former neighbors. At the same time, he also adopts the nature of a donkey, concerns himself with donkey matters, and socializes with his fellow donkeys. This cycle of reincarnation continues throughout the book, as Ximen Nao comes back successively as an ox, pig, dog, monkey, and finally as a human child who serves as one of the narrators. Admittedly, this is disorienting at first. As the novel goes on, however, Mo Yan leaves enough bread crumbs for the reader to follow the trail of what’s going on, and after a while one really appreciates this unique manner of storytelling.

As a donkey, Ximen Nao becomes the property of Lan Lian, one of his former tenant farmers, who has married Ximen Nao’s former concubine and is now raising Ximen Nao’s children. While all the farmers of Gaomi Township, under Chairman Mao’s urging, are joining the local farming cooperative, Lan Lian defiantly chooses to remain an independent farmer. As the village’s sole holdout, he (and his donkey) suffer great persecution for this decision. Though often told in a satirical manner, the novel vividly brings to life the paranoia and vindictiveness of the Cultural Revolution, when anyone accused of displaying remotely capitalist tendencies could be punished by their vigilante neighbors. The novel spans the years 1950 to 2000, so Mo Yan later gets the opportunity to apply his biting wit to China’s recent transformation towards capitalism.

Life and Death Are Wearing Me Out is really a fascinating look at Chinese history and a fun read loaded with dark humor. The book’s one major fault is that it is just too long. Lengthiness itself is not a fault, but there is definitely some fat that could be trimmed here. The midsection, in particular, sometimes makes overly protracted digressions into the animal lives, replete with feces and sex jokes. One must admit, however, that when Mo Yan tries to be funny, he truly is funny. It is admirable the way he effortlessly weaves lowbrow profanity into his epic literary narrative. In real life, Mo Yan grew up in Gaomi, and he playfully inserts himself as a supporting character in the book, a troublemaking problem child who grows up to be an overrated writer.

For all its laughs, however, the overall arc of the novel is ultimately tragic, as we watch members of the family and community meet with disappointment, dishonor, and death. The book contains some profoundly moving scenes of emotional power that belie its predominantly satirical bent. Together the light and the dark, the high and the low, the comedy and the tragedy, all add up to a truly memorable reading experience.
Meer lezen
13 mensen vonden dit nuttig
Vertaal recensie in het Nederlands

Bernie Gourley
5,0 van 5 sterren The story of a family across three generations in late-20th century China, and of a donkey, ox, pig, dog, and monkey
10 november 2016 - Gepubliceerd op Amazon.com
Geverifieerde aankoop
This strange title turns out to be a perfect summation of the book. The narrator / protagonist was a wealthy land owner named Ximen Nao who was executed when the Communists gained power in China. In heaven, Lord Yama (the judge in Chinese folklore’s version of the afterlife) sentences Ximen Nao to be sent back to Earth as a donkey, and—in subsequent lives—as an ox, a pig, a dog, and, finally and briefly, as a monkey. He’s always sent back to the family of one of his former underlings, Lan Lian, and the story follows that family over the course of several decades through the Cultural Revolution and China’s grand reforms.

The early parts (the lives of donkey, ox, and part of pig) are centered on Lan Lian’s decision to remain an independent farmer. Mao Zedong promised all farmers the right to remain independent contractors if they wished, but there was great pressure—first from the community and later from his own family—to become part of the commune. This ends up dividing the family, and ultimately Lan Lian ends up on his own. The latter part of the book (i.e. dog and monkey lives) deals with Lan Lian’s children (and eventually their children), and—particularly--with Lan Jiefang who shares a birthmark and a stubborn streak with his father. Lan Jiefang’s stubbornness is revealed as a desire to divorce his wife and to marry a younger woman. His equally stubborn wife refuses the divorce, and Jiefang and his young lover become ostracized. At the tail end of the book we see how Lan Jiefang’s son is afflicted by the same dogged determination to pursue a costly path—as a respected member of the police force he falls for a former classmate who has become a pariah.

The book mixes humor with tragedy. The animal incarnations of Ximen Nao each have its own personality, but retain some of the landlord’s character and memories. The animal stories are both part of and comedic counterpoint to the tales of woe experienced by Lan Lian’s family. Mo Yan has cameo appearances throughout the book, though in the dog’s life section he plays a more substantial role. References to Mo Yan’s character invariably come with self-deprecating humor. The author creates characters that the reader is interested in. What I call stubbornness is really a tenacious willingness to suffer for the principle of pursing one’s own happiness. In the case of Lan Jiefang and his wife, the reader is likely to be torn by the gray situation. The wife seems the more sympathetic character, but, still, one can’t help but appreciating the tenacity of Lan Jiefang and his willingness to suffer so greatly on the principle that “the heart wants what the heart wants.”

In addition to a good story with vibrant characters, this book offers a birds-eye view of China in the latter half of the 20th century. What is happening in the lives of the characters isn’t divorced from what is going on in the world, but is shaped by it. One notices this most vividly across the three generations over which the book’s story unfolds—with the middle generation (Lan Jiefang’s) serving as hinge point. When Lan Jiefang’s half-brother goes from being a Communist Party apparatchik to the wealthy CEO of a large firm, it’s a reflection of the societal undercurrents.

Biblioteca per la vendita
3,0 van 5 sterren Other Mo Yan novels are more original
21 augustus 2015 - Gepubliceerd op Amazon.com
Geverifieerde aankoop
I'm not a scholar of Chinese literature, but I've been reading Mo Yan's novels in consecutive order. Like Big Breasts and Wide Hips the narrative's chronology sweeps across several decades and has many characters, their names, physical attributes and personalities unmemorable. The four characters that stand out in this novel are the father, his son, Ximen Nao (and his multiple animal reincarnations), and "Mo Yan", apparently a fictional and perhaps caricatural representation of the author. Clinging to Mao Zedong's license to let individual farmers retain their private ownership of their land during China's great collectivization movement, the father defies local pressures to join the local collective and maintains his narrow strip of land as a subsistence plot. His son faces the choice of turning his back on his father or joining him in being spurned by the whole community. Ximen Nao, who is reincarnated as a Donkey, an Ox, a Pig, a Dog, a Monkey, and finally a human, tells most of the narrative, basically an eye witness account of events in the township from his various animal perspectives. It's an interesting story told from the animals perspectives, which makes me admire Mo Yan's imagination. However, some of it feels like recycling language, situations, and imagery from his previous works. As a work in itself, I would say it's not worth the long slog. Republic of Wine, The Garlic Ballads, and Red Sorghum were more original.
Meer lezen
11 mensen vonden dit nuttig
Vertaal recensie in het Nederlands
Ga naar Amazon.com om alle 123 recensies te bekijken 3,9 van 5 sterren
Terug naar boven
Over ons
Verkoop bij ons
We helpen je graag
© 1996-2020, Amazon.com, Inc. en dochterondernemingen