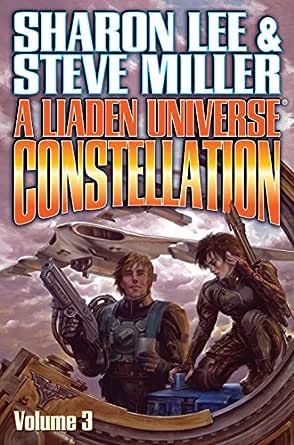 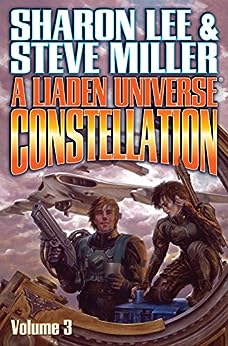 BOOK 3 in the multivolume Liaden Universe ® short fiction collection. Tales of the Liaden Universe® brought together for the first time. Space opera and romance on a grand scale in a galaxy full of interstellar trading clans.

A dozen recent Liaden Universe short works are added to the collection in the third volume of A Liaden Universe Constellation. Ranging from comic to cosmic, only one of these works was first published before 2011. These welcome new additions bring the collected Constellation of Lee & Miller Liaden short stories to 45 works in three mega-volumes.

Since 1995, Sharon Lee and Steve Miller also created shorter tales, illuminating additional facets of the Liaden experience. Here is a vast tapestry of tales of the scouts, artists, traders, priestesses, sleight of hand magicians, and pilots who fill the Liaden Universe® with the excitement, action, and romance that readers of the hit series have come to adore. Contains all new entries published after 2011.

At the publisher's request, this title is sold without DRM (Digital Rights Management).

About A Liaden Universe Constellation Volume 1:
“. . . adds a bit of sparkle to ordinary life. . . . This series [is] . . . the premier place to find good romantic SF adventure. . . . strong characters finding their own way (and, often, each other) in an action-packed galaxy of worlds. . . . Every story stands on its own; readers don’t have to be familiar with the Liaden universe. Those who have had the pleasure, though, will find many connections to existing tales.” —Analog on A Liaden Universe Constellation: Volume 1.

About the Liaden Universe® series:
“Every now and then you come across an author, or in this case, a pair, who write exactly what you want to read, the characters and personalities that make you enjoy meeting them. . . . I rarely rave on and on about stories, but I am devoted to Lee and Miller novels and stories.” —Anne McCaffrey

“These authors consistently deliver stories with a rich, textured setting, intricate plotting, and vivid, interesting characters from fully-realized cultures, both human and alien, and each book gets better.”–Elizabeth Moon

“[D]elightful stories of adventure and romance set in a far future. . .space opera milieu. It’s all a rather heady mix of Gordon R. Dickson, the Forsythe Saga, and Victoria Holt, with Lee and Millier’s own unique touches making it all sparkle and sizzle. Anyone whose taste runs toward SF in the true romantic tradition can’t help but like the Liaden Universe.”—Analog

“[T]he many fans of the Liad universe will welcome the latest…continuing young pilot Theo Waitley’s adventures.” – Booklist on Saltation

Maine-based writers Sharon Lee and Steve Miller teamed up in the late 80s to bring the world the story of Kinzel, a inept wizard with a love of cats, a thirst for justice, and a staff of true power. Since then, the husband-and-wife have written dozens of short stories, and eighteen novels, most set in their star-spanning Liaden Universe®. Before settling down to the serene and stable life of a science fiction and fantasy writer, Steve was a traveling poet, a rock-band reviewer, reporter, and editor of a string of community newspapers.
click to open popover

L. Pierce
5,0 van 5 sterren Another winner from a wonderful writing duo
16 augustus 2015 - Gepubliceerd op Amazon.com
Geverifieerde aankoop
I am a fan of the Liaden books since they came out oh so many years ago. I got this not knowing exactly what to expect except it was a book of short stories. Now I have some of their short stories in the mini books. I love them and re-read them. I was afraid I had bought the same thing over again. I had not.

I had a wonderful time going from one part of the Liaden worlds to the next, changing times, and in general, just having a good time. I loved getting back stories of different characters I had read about. Do you need to read the series for to read the short stories? No, but they allude to things you learn in the novels. I highly recommend this book and the series to anyone who enjoys science fiction.

I am now headed to order books 1 and 2. That is how satisfied I am.
Meer lezen
4 mensen vonden dit nuttig
Vertaal recensie in het Nederlands

Old SiFi Dawg
5,0 van 5 sterren As Paul Harvey might have said, these Constellation volumes are "rest of the story" for missing background stories for the Laiden universe characters.
2 september 2019 - Gepubliceerd op Amazon.com
Geverifieerde aankoop
This volume contains stories for Tech Sargent Tommy Lee or Tom Li (see Skyblaze vol I); a Ride the Luck story; the "rest of the story" of Jeeves; a story from the Trade Secret time frame; a quirky Val Con story; a Ren Zel balance story: an early Bedel story; a delightful story of the Rifel's first encounter with romance; "rest of the story" for Theo's friend, Kara; and story of Moonhawk and Lute with a bit of a twist. You will find with these Author's character driven stories real life comedy and drama - enjoy.
Meer lezen
Vertaal recensie in het Nederlands

Kindle Customer
5,0 van 5 sterren Love these
30 juli 2015 - Gepubliceerd op Amazon.com
Geverifieerde aankoop
As always Lee and Miller come through with a pack of varied stories in the Liaden Universe(R) that fill in gaps you didn't know you wanted filled. Kinda like your friend the good cook saying ,"Here, try this." And OMG! suddenly your taste buds are going dingdingdingding! And life is complete. No, really. They do this kind of stuff all the time while leaving you wanting to find the nearest taxi for Maine so you can respectfully sit and pet the cats and maybe make them bacon while waiting for the next book. We'll be quiet, we promise!
Meer lezen
5 mensen vonden dit nuttig
Vertaal recensie in het Nederlands

Traveler
5,0 van 5 sterren Shorts to Accompany the Development of Surebleak as Korval's Home
10 oktober 2015 - Gepubliceerd op Amazon.com
Geverifieerde aankoop
Short stories, longer ones, out-takes from novels in the Liaden world -- you won't want to miss this collection by Sharon Lee and Steve Miller, who have made "melanti", Regency-style manners and space travel. Readers happily immerse themselves in a universe where a Tree is sentient, lovers can be linked for life, and revenge wars can involve multiple planets. The Clan is Korval, the long-time home of the Liaden race is Liad, and their present home is a planet called Surebleak rejoicing in the worst climate since North Dakota and Northern Maine. This may not be the book for a beginner in the Liaden worlds, but if you have read Agent of Change, I Dare, or any of the previous wonderful space operas by Lee and Miller, you're ready. Pour a glass of cinnamon-spiced wine and prepare to enjoy!
Meer lezen
Vertaal recensie in het Nederlands

HR
5,0 van 5 sterren Pretty Good Stuff
24 februari 2016 - Gepubliceerd op Amazon.com
Geverifieerde aankoop
Some really good stories, if you love Liaden lit.....
It was interesting to see how some of them have changed from the versions posted on Splinter Universe, worth getting the book just for that if you are a fan.
I really miss the old chapbooks though....

and I still can't seem to muster any sympathy for the Kinzel character, he is apparently supposed to be cute but I find him annoying and not fitting into the Liaden universe. Of course the authors get to decide, but.... it baffles me.
Meer lezen
2 mensen vonden dit nuttig
Vertaal recensie in het Nederlands
Ga naar Amazon.com om alle 71 recensies te bekijken 4,8 van 5 sterren
Terug naar boven
Over ons
Verkoop bij ons
We helpen je graag
© 1996-2020, Amazon.com, Inc. en dochterondernemingen