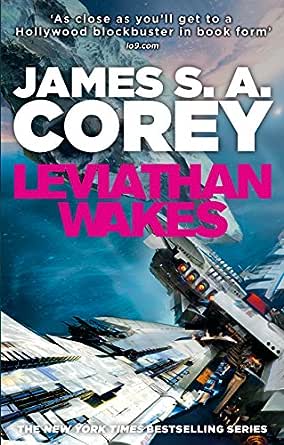 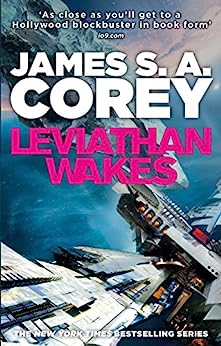 "It's been too long since we've had a really kickass space opera. LEVIATHAN WAKES is interplanetary adventure the way it ought to be written." --- George R.R. Martin
"This is the future the way it was supposed to be." --- The Wall Street Journal
"As close as you'll get to a Hollywood blockbuster in book form." --- io9.com
"An excellent space operatic debut in the grand tradition of Peter F. Hamilton." --- Charlie Stross
"If you like science fiction with great characters and set in real space, you'll enjoy this one." --- Jo Walton, author of Farthing

Humanity has colonised the solar system - Mars, the Moon, the Asteroid Belt and beyond - but the stars are still out of our reach.

Jim Holden is an officer on an ice miner making runs from the rings of Saturn to the mining stations of the Belt. When he and his crew discover a derelict ship called the Scopuli, they suddenly find themselves in possession of a deadly secret. A secret that someone is willing to kill for, and on an unimaginable scale. War is coming to the system, unless Jim can find out who abandoned the ship and why.

Detective Miller is looking for a girl. One girl in a system of billions, but her parents have money - and money talks. When the trail leads him to the Scopuli and Holden, they both realise this girl may hold the key to everything.

Holden and Miller must thread the needle between the Earth government, the Outer Planet revolutionaries and secret corporations, and the odds are against them. But out in the Belt, the rules are different, and one small ship can change the fate of the universe.

Virginia Dad
5,0 van 5 sterren After much delay, finally took the bait and am glad I did.
21 april 2017 - Gepubliceerd op Amazon.com
Geverifieerde aankoop
I hate to follow the crowd with my reading choices so I was slow to try the expanse series. Now I know better. This was a good read. If you get past nit-picking the technological and astrophysics details, then you can settle back and enjoy the ride. The pace really makes this work. I watched the first couple of episodes of the TV series and hesitated to read the books because I was not interested in reading about palace intrigues and politicking. I'm glad that I finally bit the bullet and bought the book because the authors - it's actually two - do a great job weaving the politics into the plot without dragging out the story. I did like the characters and though the detective was particularly interesting. But overall, the pacing is just well done. If you want engaging material, then look no further. I bought this as a Kindle special and bought the 2nd book in the series at full price as soon as I finished this one. I'd call it a great space opera but it all takes place in our solar system, so maybe it's more accurate to call it great "solar opera." Whatever you call it, it's a great epic tale.
Meer lezen
80 mensen vonden dit nuttig
Vertaal recensie in het Nederlands

mindseye18
5,0 van 5 sterren Great beginning.
28 maart 2017 - Gepubliceerd op Amazon.com
Geverifieerde aankoop
I was worried about starting this book after watching the show on SyFy. I thought the show would be one big spoiler for the book. Well the show is great and so is the book. I knew basically were it was going but the book expands on the show in great and beautiful detail. I learned more about the characters and their motivations. As well as more details about the over arching politics of the solar system. I am excited to start the next book.
Meer lezen
72 mensen vonden dit nuttig
Vertaal recensie in het Nederlands

Sean Farrell
5,0 van 5 sterren An exciting start for a promising series.
2 oktober 2017 - Gepubliceerd op Amazon.com
Geverifieerde aankoop
Since it seems like George R.R. Martin is not exactly going to be putting out the next installment in his epic series any time soon, I really felt like I needed another one to get into in the meantime. With the SyFy show based off these books, "The Expanse", gaining traction, I thought why not give sci-fi a try. I was not disappointed. This first installment only hints at the politics of the universe the authors have created, though I suspect we will get more detail about it in the following installments, but suffice it to say they do a great job setting up a believable world in which humanity has spread out into our solar system, having colonized Mars, the asteroid belt, and beyond. As can be expected of human nature, over the centuries of this arrangement, people in different places have come to have varying degrees of distrust for people from other locations, making the possibility of war ever-present. Amidst this environment we are introduced to a missing-girl case on Ceres Station being investigated by private security Agent Miller and the adventures of Jim Holden and his crew, who are trying to find out who attacked their ship. These 2 plots and the fate of the galaxy all wind up intertwining in intriguing and exciting ways. The story moves along at a quick pace, but still allows time to develop the characters and the world they populate. It is a thrilling tale that you will have a hard time putting down, even if you don't normally read science fiction, and which will leave you eager to get started on the next in the series.
Meer lezen
39 mensen vonden dit nuttig
Vertaal recensie in het Nederlands

Nikolas P. Robinson
5,0 van 5 sterren I'm Glad There Is More
5 maart 2016 - Gepubliceerd op Amazon.com
Geverifieerde aankoop
Leviathan Wakes is, without a doubt, the beginning of something amazing. I have the next two books in the series and I am looking forward to reading those as well as the additional novels I don't own yet.
I owned this book for about three years without ever picking it up from my book shelf (I had pretty much forgotten about it) and I may have continued to neglect it were it not for The Expanse being produced by SyFy. Sadly, I watched the first season of the series before reading this novel and I don't like doing that...but I don't feel like it was detrimental in any way. I'd like to discuss a couple of the differences for those who have only either read the book or seen the television show before I do anything else.
There are some pretty dramatic differences between the book and the series, the biggest being that the first season ends about 3/5 of the way through the narrative of the first novel, which is something I truly hope SyFy addresses with the second season since there is a lot going on in that third act of the story.
The other major difference between the book and the television series is that we aren't introduced to the political environment and maneuvering taking place on Earth in the novel, though I appreciate that additional subplot from the show and actually kind of wish it had been part of the book.
Beyond that, the differences are really quite minimal, some characters who don't quite line up between the two mediums (either because of descriptions that don't match up with the casting for the series or because the personalities/interactions are just a little bit off) and a couple of plot points that play out a touch differently or occasionally in different sequence...but those aren't as troubling as they could be.
Written by James S.A. Corey (a fictional person, really the collaboration between Daniel Abraham and Ty Franck), this is one hell of an ambitious novel, successfully weaving space opera, militaristic science fiction, and noir mystery into an exciting, intense, and sometimes even scary tapestry.
The stated goal of the authors was to fill in the gap that is almost always present where science fiction is concerned. Typically we either end up with near-future cyberpunk or dystopian stories or distant future space operas and the like taking place after we have spread throughout the galaxy or even the universe itself. This book (and presumably the whole series) provides the reader with a suitably rich and detailed vision of what we have between those intervals, during the time when we are still colonizing our own solar system and only just considering setting our sights further into what we have beyond our galactic neighborhood.
The interactions between Miller and Holden (as well as their separate storylines) are fantastic and well-written enough that the two protagonists really do provide vastly different lenses through which the same events are being experienced. We see a lot of that in The Expanse, but there is a lot of subtext that gets lost in translation between the two mediums.
After reading this book I am determined to pick up some of Daniel Abraham's fantasy novels, which I might have ended up doing anyhow. The man is an excellent author and Ty Franck clearly learned a thing or two while working for George R.R. Martin where grand, sweeping narratives and visceral (almost punishing) inevitability in narratives are concerned.
Whether you have already seen The Expanse or simply want to read an excellent science fiction novel, I have to recommend reading Leviathan Wakes.
Meer lezen
189 mensen vonden dit nuttig
Vertaal recensie in het Nederlands
Ga naar Amazon.com om alle 2.342 recensies te bekijken 4,6 van 5 sterren
Terug naar boven
Over ons
Verkoop bij ons
We helpen je graag
© 1996-2020, Amazon.com, Inc. en dochterondernemingen