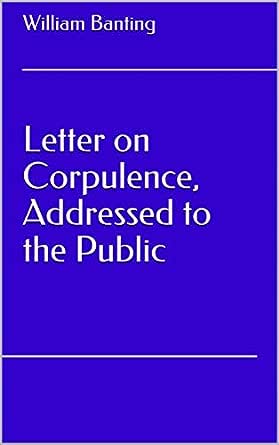 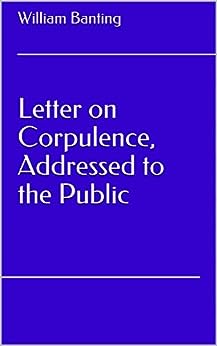 Letter on Corpulence, Addressed to the Public (English Edition) Kindle-editie

Letter on Corpulence, Addressed to the Public by William Banting
click to open popover

Master Hahn
5,0 van 5 sterren Banting Diet....The REAL Original LCHF Lifestyle Diet
25 februari 2016 - Gepubliceerd op Amazon.com
Geverifieerde aankoop
Having read this originally through our local regional library network, I initially found a free copy online. I have recently purchased a Kindle version (of another recent publication - the book's copyright has long since expired so anyone can re-print it or even offer for free on the Internet via a PDF file or similar).

This small book was first published in 1863 at the cost of the author, a London area undertaker, who used this LCHF diet - specifically designed for simplicity - to cure his own major obesity - and several medical problems that developed as his obesity worsened).

It was meant to educate the very obese peoples (of most classes) of that Victorian Era of a simple diet LIFESTYLE system (it is NOT a diet that one temporarily goes on and then off of when goals are met as fattening condition will simply return - usually worse - leading to the dreaded "yo-yo" dieting) not to be some comprehensive low carb manual.

It is a historic document as much as anything else (being, I think, the first book specifying a very low carb diet for weight loss and medical purposes), though - properly tweaked (for example butter is excellent on this diet system, likewise tropical oils like coconut oil and palm oil would be perfectly acceptable though not heard of likely... and of course the use of pork and any other animal or seafood product; note that butter and pork were restricted back then MAINLY because it was - erroneously - thought that butter and pork contained starch... plus dairy production was poorly regulated and unpasteurized and UNDERCOOKED pork was known to carry some diseases such as pork tapeworm and trichinosis, less of a problem today due to sanitation improvements and to freezing of meats).

Mr. Banting did not "invent" the LOW carb diet. He was put in it by one of his doctors (out if a long line that he had seen prior to that) by the name of Dr. William Harvey. Doctor Harvey had found out about the core basics of this program's system previously at a conference in Paris. He had learnt of this type of diet had learnt of this type of diet, but in the context of diabetes management, from attending lectures in Paris by Claude Bernard, a French physiologist.

Gary Taubes' recent study of carbohydrates, Good Calories, Bad Calories, begins with a prologue entitled "A brief history of Banting" and discusses Banting at some length.

A couple of things should be noted.

First was that Banting was publicly vilified by the medical authorities for advancing a low-carbohydrate diet and false rumours were spread, claiming his diet had destroyed his health. It was so contrary to the established doctrine that it set up a howl of protest among members of the medical profession. The 'Banting Diet' became the centre of a bitter controversy and Banting's papers and book were ridiculed and distorted. As a layman had published it, and medical men were anxious that their position in society should not be undermined, they felt bound to attack it. Banting's paper was criticised solely on the grounds that it was 'unscientific'. The attacks on Banting prefigured similar rumours spread about Robert Atkins, and the Atkins Foundation maintains Banting's works on its website.

Likewise, Dr. Harvey had a problem too. He had an effective treatment for obesity but not a convincing theory to explain it. As he was a medical man, and so easier for the other members of his profession to attack, he came in for a great deal of ridicule until, in the end, his practice began to suffer.

However, the public was impressed. Many desperate, overweight people tried the diet and found that it worked. Like it or not, the medical profession could not ignore it. Its obvious success meant that the Banting Diet had to be explained somehow.

To the rescue from Stuttgart came a Dr. Felix Niemeyer. He managed to make the new diet acceptable with a total shift in its philosophy. After examining Banting's paper, Niemeyer came up with an answer to the doctors' problem. All doctors "KNEW" that protein was not fattening, only the "respiratory foods" (as they were called then) — carbohydrates... and fats (which in fact are NOT fattening!). He, therefore, interpreted 'meat' to mean only LEAN meat with the fat trimmed off and this subtle change solved the problem - for many of the medical establishment. The Banting Diet became a high protein diet with both carbohydrate and fat restricted. This altered diet became enshrined in history and still forms the basis of MOST low carbohydrate type slimming diets today (even the Atkins Diet is primarily oriented towards low carb, high protein, fairly moderate fat).

Banting's descriptions of the diet are quite clear, however. Other than the prohibition against butter and pork, nowhere is there any instruction to remove the fat from meat and there is no restriction on the way food was cooked or on the total quantity of food which may be taken. Only carbohydrate — sugars and starches — are restricted. The reason that butter and pork were denied him was that it was thought at this time that they too contained starch.

Banting, who lived in physical comfort and remained at a normal weight until his death in 1878 at the age of 81, always maintained that Dr. Niemeyer's altered diet was far INFERIOR to the one that had so changed his life.

I found it disturbing the the Introduction given for this book indicated that Mr. Banting was a carpenter. In fact he was a notable undertaker in London (*).

It also stated that Mr. Banting published these books for free. Banting charged nothing for the first two editions of his book — he didn't want the accused of doing it merely for profit. He had printed 1,000 copies of the first edition and he gave them away. The second edition numbered 1,500 which he also gave away although they cost him 6d each. These two initial editions initially were self-published (initially because no publisher would accept it). The self-published edition was so popular (selling out rapidly) that he determined to sell it to the general public. The third and later editions were published by Harrison Publishers of London.

(*) In fact, the family business of William Banting of St. James’s Street, London, was among the most eminent companies of funeral directors in Britain. As funeral directors to the Royal Household itself, the Banting family conducted the funerals of King George III in 1820, King George IV in 1830, the Duke of Gloucester in 1834, the Duke of Wellington in 1852, Prince Albert in 1861, and many others including very many of the upper class... a LOT different than a carpenter. He was a carpenter only in the sense of his carpentry skills along with metalworking and other aspects in the making of notably fine coffins.

rule870
5,0 van 5 sterren Banting Started It!
6 september 2014 - Gepubliceerd op Amazon.com
Geverifieerde aankoop
This is effectively the beginning of the modern concept of the Carb-restricted diet, replacing carbs with fat contained in the protein-rich foods: meat, foul, fish and eggs, along with cream and butter.

Banting's formula was simple to understand and holds true today: No Sugar, No Starch, No Bread, No Beer(Banting excepted spirits, which had no effect on Insulin, which wouldn't be known for some decades.). Cut through all the modern fussiness (Paleo, Primal etc) and hold to the principal of: NO S.S.B.B., and you won't go wrong.
Meer lezen
3 mensen vonden dit nuttig
Vertaal recensie in het Nederlands

Jamie Logie
5,0 van 5 sterren Go back to the classics
29 september 2014 - Gepubliceerd op Amazon.com
Geverifieerde aankoop
This can be considered the worlds first diet book. And pretty much all modern diets and popular food movements have their origins in this book.
Banting shows how getting away from starches and breads and focusing on real meats and natural foods can help keep weight under control and help to fight of things like diabetes and heart disease.
I run a nutrition website called regained wellness.com and I refer back to these old works a lot along with Weston A. Price as these guys helped to lay the groundwork for the real food and paleo movements.
Even though books like these are all the information in them is more relevant than ever today
Meer lezen
3 mensen vonden dit nuttig
Vertaal recensie in het Nederlands

science reader
5,0 van 5 sterren he's the grand daddy
14 mei 2013 - Gepubliceerd op Amazon.com
Geverifieerde aankoop
Those of us who overcame our own corpulence by finally comprehending the truth in this brave, generous "letter," (pamphlet or tract) from 1864 reread and revere it because it was written by our grand daddy in the endeavor. It is canon for us. Low carbers gratefully recognize a kind of communion of saints, beginning with our hunter gatherer ancestors, then our William Banting, then the researchers who before World War II were onto the truth with their low starch trials, more recently, the medical doctors who reported success with their patients using the same approach. They are listed and evaluated now at [...] along with stories of their successes. Among our current heroes is Gary Taubes, whom history will credit with articulating our truth for the twenty-first century and inventing one means to quantify it. One reviewer complains there is little to learn from this book. Perhaps, if you have read a lot of the more recent work, but it is delightful in its literacy and it holds a place in history and in our hearts. Buy it for old time's sake and enjoy.
Meer lezen
9 mensen vonden dit nuttig
Vertaal recensie in het Nederlands