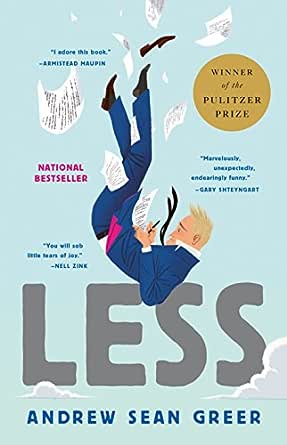 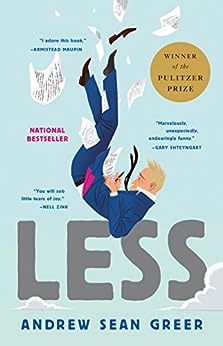 Andrew Sean Greer is the bestselling author of five works of fiction, including The Confessions of Max Tivoli, which was named a best book of 2004 by the San Francisco Chronicle and the Chicago Tribune. He is the recipient of the Northern California Book Award, the California Book Award, the New York Public Library Young Lions Award, the O Henry award for short fiction and fellowships from the National Endowment for the Arts and the New York Public Library. Greer lives in San Francisco. He has traveled to all of the locations in this novel, but he is only big in Italy.
--Deze tekst verwijst naar de paperback editie.

"Less is the funniest, smartest and most humane novel I've read since Tom Rachman's 2010 debut, The Imperfectionists....Greer writes sentences of arresting lyricism and beauty. His metaphors come at you like fireflies....Like Arthur, Andrew Sean Greer's Less is excellent company. It's no less than bedazzling, bewitching and be-wonderful."
--New York Times Book Review

"Less is perhaps Greer's finest yet.... A comic yet moving picture of an American abroad.... Less is a wondrous achievement, deserving an even larger audience than Greer's bestselling The Confessions of Max Tivoli."
--Booklist, starred review

"A fast and rocketing read with everything I want from a story--moments of high humor, moments of genuine wisdom, sharp insights and gorgeous images. A wonderful, wonderful book!"
--Karen Joy Fowler, author of We Are All Completely Beside Ourselves

"Dressed in his trademark blue suit, Less adorably butchers the German language, nearly falls in love in Paris, celebrates his birthday in the desert and, somewhere along the way, discovers something new and fragile about the passing of time, about the coming and going of love, and what it means to be the fool of your own narrative. It's nothing less than wonderful."--Book Page

"Greer elevates Less' picaresque journey into a wise and witty novel. This is no Eat, Pray Love story of touristic uplift, but rather a grand travelogue of foibles, humiliations and self-deprecation, ending in joy, and a dollop of self-knowledge."--National Book Review

"Greer is an exceptionally lovely writer, capable of mingling humor with sharp poignancy.... Brilliantly funny.... Greer's narration, so elegantly laced with wit, cradles the story of a man who loses everything: his lover, his suitcase, his beard, his dignity."--Ron Charles, Washington Post

"Greer, the author of wonderful, heartfelt novels including The Confessions of Max Tivoli, The Impossible Lives of Greta Wells and The Story of a Marriage, shows he has another powerful weapon in his arsenal: comedy. And who doesn't need a laugh right about now?"--Miami Herald

Ollie van Hal
5,0 van 5 sterren A great love story
23 februari 2019
Geverifieerde aankoop
I love novels that are funny without being comedies. This one is that. The protagonist, Arthur Less, is gay and incredibly pure of heart. Very refreshing! The books also describes what I think is anxiety really well. As it is, as it feels, but without making it dramatic or exotic.
Meer lezen
Nuttig
Commentaar geven Misbruik melden
Vertaal recensie in het Nederlands
Alle 1 klantenrecensies bekijken
Klantenrecensie schrijven

Jody Forman
2,0 van 5 sterren Couldn't care less about "Less".
26 juli 2018 - Gepubliceerd op Amazon.com
Geverifieerde aankoop
What was the Pulitzer group thinking?!? Based on the Pulitzer designation and based on some of the endorsements from favorite writers (Ann Patchett), my book club chose "Less". All six of us (college educated women ages 35 to 71) disliked it. The criticisms were that the main character was uninteresting, unsympathetic and unrelatable; that the paltry humor was only mildly amusing (not "hysterical" as one endorsement said), the ending was predictable and anticlimactic; and that we finished reading it out of duty to the club, not because the book was compelling. In other words, we couldn't care less about "Less". The only redeeming aspect was the interesting way the author would weave past and present together in the narrative. I cannot recommend this book and the Pulitzer people need to reexamine their standards.
Meer lezen
720 mensen vonden dit nuttig
Vertaal recensie in het Nederlands

John R Crawford
1,0 van 5 sterren Disappointing
21 augustus 2018 - Gepubliceerd op Amazon.com
Geverifieerde aankoop
If you're looking for a book about a neurotic gay man to whom nothing really interesting happens, and who spends an inordinate amount of time lamenting the loss of a former partner, then you'll like LESS. But if you're looking for a book with interesting characters and an actual plot, look elsewhere.
Meer lezen
346 mensen vonden dit nuttig
Vertaal recensie in het Nederlands

R. Zocher
5,0 van 5 sterren Loved it!
17 mei 2018 - Gepubliceerd op Amazon.com
Geverifieerde aankoop
After I started reading Less I immediately thought “So, why did this win the Pulitzer?” Then, about half way through, I began to understand. By the time we get to Morocco with Arthur Less, I was mentally comparing Less to Lolita, though the characters are nothing alike. While you hate the protagonist Humbert in Lolita, there is no denying the power of the novel. And where you will love the protagonist Arthur Less, it is the writing that shines here, not the sweep of the story or the depth of the characters. Is there a literary genre called Profound Humorous Romps? That’s where this book belongs. This is not a “gay” book, but Arthur is gay. This is not a story about middle age, but Arthur is confronting his own aging. This is a story about how humans are constantly swimming upstream against life. This is a story about how humans are old or young or bald or sad or beautiful or boring and sometimes we are more, but sometimes we are…(wait for it)…Less. I just hope Arthur turns sixty really soon, and Andrew Greer brings us a new book so we can ride shotgun again with Less.
Meer lezen
415 mensen vonden dit nuttig
Vertaal recensie in het Nederlands

close reader
2,0 van 5 sterren Disappointing
17 juli 2018 - Gepubliceerd op Amazon.com
Geverifieerde aankoop
I'm encouraged to see that I'm not the only one who thought this book wasn't so hot. After reading all the pages of raving blurbs, I thought I'd really be in for a treat. But I couldn't believe in it (and this is from another aging--okay, old--gay man). I spent so much energy slogging through the writer's attempts to be clever in every single sentence that I couldn't get involved with the character or story. I will admit that I laughed out loud a few times, and that's a lot more than I get out of the majority of books I read, but overall it was tedious, difficult reading. I was left wondering if "winner of the Pulitzer prize" was just part of the title--a bit of irony based on Less's older lover's having won the prize.
Meer lezen
276 mensen vonden dit nuttig
Vertaal recensie in het Nederlands

Alirock81
1,0 van 5 sterren Less is much less than stimulating
19 augustus 2018 - Gepubliceerd op Amazon.com
Geverifieerde aankoop
I am so glad there are so many other 1 star reviews, as I was beginning to think I lacked a certain literary suaveness since I basically hated this book and it won the Pulitzer.

What’s the issue? Nothing....happened! During all his trevails all over the world, I kept expecting actual life-changing events and learnings. All that happened was continual pity parties for Less and the ongoing obsession with his ex.

I will no longer accept that I need to read a book, or that it is actually GOOD, based on what the Pulitzer Board thinks. They’ve lost major credibility to me. I could not wait for this book to be over. I gave up in the second to last chapter and literally threw the book in the trash.
Meer lezen
167 mensen vonden dit nuttig
Vertaal recensie in het Nederlands
Ga naar Amazon.com om alle 1.905 recensies te bekijken 3,6 van 5 sterren
Ontdek het beste van shopping en entertainment
Gratis en snelle bezorging van miljoenen producten, onbeperkt streamen van exclusieve series, films en meer
> Ontdek Prime
Terug naar boven
Over ons
Verkoop bij ons
Amazon-betaalmethoden
We helpen je graag
© 1996-2020, Amazon.com, Inc. en dochterondernemingen