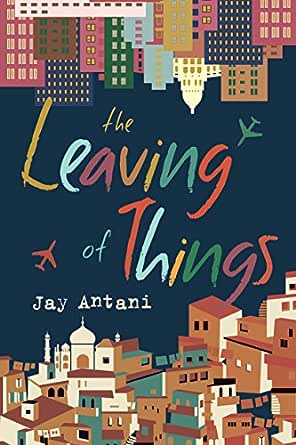 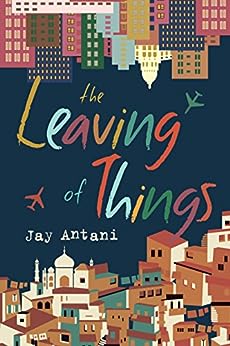 Vikram is not your model Indian-American teenager. Rebellious and adrift in late 1980s Wisconsin, he is resentful of his Indian roots and has no clue what he wants from his future—other than to escape his family’s life of endless moving and financial woes. But after a drunken weekend turns disastrous, Vikram’s outraged parents decide to pack up the family and return to India—permanently.

So begins a profound journey of self-discovery as Vikram, struggling with loneliness, culture shock, and the chaos of daily Indian life, finds his creativity awakened by a new romance and an old camera. His artistic gifts bring him closer to a place and family he barely knew. But a devastating family crisis challenges Vikram’s sense of his destiny, hurtling him toward a crossroads where he must make the fateful choice between India, the land of his soul, and America, the land of his heart.

Revised edition: This edition of The Leaving of Things includes editorial revisions.

lindseyleej
5,0 van 5 sterren How would it feel to be a stranger in your own homeland?
17 juni 2013 - Gepubliceerd op Amazon.com
Geverifieerde aankoop
I read THE LEAVING OF THINGS over the course of what turned out to be a very enjoyable weekend. At 360 pages, the story was rich and deep enough to lose myself in, and its teenaged hero, Vikram, spoke with an authentic, intimate voice that immediately drew me in and kept me hooked until the end.

"India wasted no time with me," Vik confides on page one, and the story takes off. Vik's predicament is uniquely compelling: he is an Indian-American teenager who spent most of his childhood in Wisconsin, USA, and now must move to India for college. The story recalls other great depictions of the immigrant experience--as I read, the work of Jhumpa Lahiri and Junot Diaz came to mind--yet THE LEAVING OF THINGS cleverly turns this familiar story on its head. The book asks, What is it like to be an "other" in the Old World? How does it feel to move from the land of McDonald's and Madonna to that of khari puri and Bollywood?

Throughout the novel, writer Jay Antani explores complex questions of racial, cultural, and national identity with thoughtfulness and grace. As Americans, we may be accustomed to visiting other countries as tourists, viewing foreign cultures and customs through the lens of orientalist exoticism or simple curiosity. And other works of literature have shown us India as experienced by its natives. In THE LEAVING OF THINGS, however, we see India through the eyes of an American kid who is neither a tourist nor a local, an Indian kid who should belong but doesn't. An Indian who is not Indian, an American who is not American, Vik struggles to find his place in this strange and fluid universe, and the stakes are high.

As Vik sets off on his journey, there are slapstick-funny, fish-out-of-water experiences: for example, soon after arriving in India, the poor kid is hurled into the mud by a rickshaw run amok. But I was more fascinated by the subtle cultural markers that Vik points out: Vik's college, Xavier's, has intricate social rules for how girls and boys may interact as well as severe academic practices that bring to mind a Victorian British boarding school, revealing the insistent echoes of colonialism. Meanwhile, the city's French cultural center, where Vik must take language lessons, adds to the mix a dose of Parisian snobbishness (and, Vik is ecstatic to note, air conditioning), and traditional practices such as arranged marriage continue to influence the characters' lives. Vik and his love interest, fellow Indian-American hybrid Priya, must navigate this weave of histories and cultures while also undertaking the universal task of forming their own unique identities, of growing up.

What I enjoyed most about this book, along with the voice of young Vik and the thought-provoking cultural explorations, were the lush and vivid descriptions of everyday life in Ahmedabad, India. The amount of detail in these descriptions is incredible, and could only have been written by a true insider. In my favorite passage, near the story's end, Antani slips into the second person to describe Ahmedabad as he has experienced it. The prose is infused with a lovely sense of nostalgia which the reader, having followed along with Vik's journey toward understanding and appreciating his ancestral homeland, feels as well. He writes, "You leave the sound of running water as the cleaning girl washed your clothes. You leave peacocks in the courtyard swaying in the shade, the sandalwood and jasmine and coconut oil anointing the air of the college corridors, the play of wind from summer to monsoon to winter and back... I tell myself you had to leave. It could never be again."
Meer lezen
141 mensen vonden dit nuttig
Vertaal recensie in het Nederlands

caron tate
4,0 van 5 sterren One I'll be Reading Again
20 juli 2013 - Gepubliceerd op Amazon.com
Geverifieerde aankoop
By coincidence, if you believe in such things, I was given a copy of the Pulitzer Prize winning short story collection Interpreter of Maladies by Jhumpa Lahiri just a couple of months before I read The Leaving of Things. This, too, was by a young Indian American and showed readers India through a very special lens. I can say without hesitation, that I enjoyed this book just as much. I thought it was as rich, as engaging and as thought-provoking.

I felt like I'd visited India, like I was one of the many flies on the wall, like I loved and hated it as much as the young teen who was uprooted from rock music and winter snow and fun on the lake and an American girlfriend and dropped unceremoniously into another world where bribes were the modus operandi for everything from getting into a good school to getting buildings constructed and seeing children defecating outdoors was the usual. And yet, at the same time, I could see why there was love for the land he was from and not of. This was a tribute to the amazingly deft hand and eye that author Antani used to create this work, because his photographer character, like he himself, sees things differently.

It is a beautiful book. If you can, read it like I did, while eating a meal that includes shahi paneer and samosa and pakora with a mango lassi on the side. And if you get a little curry on the pages, you did it just right.
Meer lezen
67 mensen vonden dit nuttig
Vertaal recensie in het Nederlands

Joseph Boenzi
5,0 van 5 sterren Culture shock in personal doses
19 december 2015 - Gepubliceerd op Amazon.com
Geverifieerde aankoop
Jay Antani tells the story of a college boy, Vikram, who is caught between cultures. Indian-born, but raised in the USA, he faces all the angst of any teenager in relationship with his parents - but more so when his parents decide to return the family to their native land. Here is a story with which many an Ethnic American can relate.

The action begins when Vikram and his family arrive at Mumbai's international airport after a long journey from Madison, Wisconsin. Having landed twice in this same airport, I could relate with the arrival scene - the descriptions are accurate and sensory (the author describes the sights, the confusing echoing sounds, the smells, the confusion of being pushed and bumped continually by panicked travelers and their twice-panicked children). This is a perfect beginning of a book that will present the realism of culture shock while at the same time telling the story of a family that is trying to do so many things: find a future, fit in, care for one another, respect traditions, achieve independence and, above all, understand their place in the world. I say "a family", for while Vikram (first-person narrator of the book) speaks of his own confusion and frustration, fears and despairs, aspirations and hopes, defeats and victories, we soon begin to understand that everyone in his immediate and extended family, as well has his classmates and friends on either side of the globe, are all striving for the same. You might tell me that this is true for every human being, and I would grant you that, but Jay Antani, through the voice of Vikram, speaks of all of the human struggle in a such youthful and personal way that the reader begins to identify all of the same movements within his or her own life experience. Vikram's story is the story of many people, even those who have never been to India and who have never tasted curry.

The story is not simply about one teenager or one family of expats/repats. It's a story of migration, and of all the difficulty that even a well-placed family experiences in the process. It is a story of interior upheaval brought about because of uprooting - not once, not twice, but many times in the life of a family, and particularly as experienced by the children. The teenaged narrator may come across as self-centered, and that is realistic. He lives inside his own shell, but that seems to me to be a defense mechanism, particularly at the start of the story. Over the long haul (or short haul, since the story chronicles only one year), Vikram becomes more aware of others, of their pain and their trials, of the sacrifices others make. He feels shamed at times, but he also begins to take ownership for his own life. Vikram's story then becomes a narrative about challenge and growth, of resentments overcome and of the learning of gratitude. It is the uprooting of people that determines the leaving of things, even the leaving of resentment for the embracing of gratitude and hope.
Meer lezen
7 mensen vonden dit nuttig
Vertaal recensie in het Nederlands
Ga naar Amazon.com om alle 559 recensies te bekijken 4,3 van 5 sterren
Terug naar boven
Over ons
Verkoop bij ons
We helpen je graag
© 1996-2020, Amazon.com, Inc. en dochterondernemingen