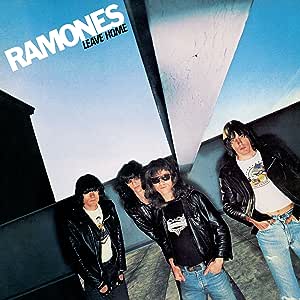 Second studio album by the American punk rock band. Originally released in 1977, the songs on 'Leave Home' concentrate on various themes, with the musical tones being diverse as well. Some tunes were more pop-oriented, while others, like 'Gimme Gimme Shock Treatment' and 'Pinhead' were loaded with distorted guitars and had a more punk rock sound.

Philip A. Baldy
3,0 van 5 sterren not bad.
13 september 2013 - Gepubliceerd op Amazon.com
Geverifieerde aankoop
First let us get this straight. This was not "remastered" from the original tapes like another reviewer said. They used the ORIGINAL master of the album to make this vinyl. Also on the remastered cd he stated they didn't use a lot of compression. that too is not true.l However, that is still the best this album has ever sounded because the original master didn't sound that great. 2nd did the album skip the first time I played it? yes on two songs I Remember You and S is a Headbanger. I cleaned the album and it didn't skip after that. Many new albums skip because of the cheep paper they. use on the cover and sleeve. Small parts of it come off and get on the album and most of the time a clean can solve this when you get it. I have heard this album on three different versions of the album this month. An original pressing, and odd Mau Mau pressing of the album and this. I would say this one sounded the best but not as good as the remastered cd.
Meer lezen
6 mensen vonden dit nuttig
Vertaal recensie in het Nederlands

ACP
5,0 van 5 sterren 5th Rule is: This 1-2 punch will Knock You Out!
25 augustus 2006 - Gepubliceerd op Amazon.com
Geverifieerde aankoop
As years pass, it will only become more apparent that the Ramones produced some of the best and influential rock songs. Few lyrics and fewer chords somehow found a way to establish so much.

The 2nd in the great trio of Ramones titles from 1976-77, Leave Home has been combined with a memorable 1976 west-coast gig. The 1-2 punch will simply knock you out.

Glad to See You Go, Gimme Gimme Shock Treatment, Suzy Is a Headbanger, Pinhead, and Commando will all have you chanting and dancing along. Oh Oh I Love Her So succeeds where others have not dared to tread - and yes, some of us do remember similar moments in our young, Queens, New York lives.

After getting in the mood, what better way to wrap up this experience but with a thunderous 16-track live performance where we can hear a virtual greatest hits of their early material. I was floored by the musical and historical weight of this disc, and have little doubt that you will as well.

David Bradley
5,0 van 5 sterren Gabba Gabba Hey
4 juni 2002 - Gepubliceerd op Amazon.com
Geverifieerde aankoop
This was the first Ramones album--maybe the first punk album--that I ever bought, and I can still remember how it FUZZED MY BRAIN.
After three years of Top-40 radio dominated by the likes of Andy Gibb, Seals & Crofts and Steely Dan, LEAVE HOME was more than a breath of fresh air, it was a tornado. Within six months of hearing this LP I was a complete convert, wearing torn jeans, playing nothing but barre chords, and hunting down the Sex Pistols, Clash, Ramones, etc. LPs that were then generally available only as imports.
Punk was very quickly turned into some quirky American marketing scheme--I'm thinking about Blondie, the Talking Heads and the Romantics here--but with a few short gliches (END OF THE CENTURY, for example) the Ramones remained true. They were one of the very few who found a connection between punk and traditional rock--"Pinhead" and "California Sun" sound just fine side by side, for instance--so I guess they didn't see much reason to fool with the formula.
And they were great fun. "Carbona Not Glue" and "Beat On The Brat" are a laugh, not the misanthropic mess they would have been in lesser hands. You can not keep your head from bangin' when listening to the Ramones.
Joey Ramone may be the most underrated singer in rock history. A lot of intitial critical reaction to the Ramones focused on the relentless bass/rythm guitar attack; to me it had as much to do with Joey's vocals as anything else. Could he hit high notes with George Michael? No. Would he want to? No. Joey Ramone put across NY swagger like nobody's business, and David Johanson would have given his eye teeth to sing like Joey.
Ramones LPs been called audio comic books, and to a large extent that's true. On the other hand, they were the only rockers I recall who had the guts to release a record about the absurdity of Ronald Reagan's embrace of the Third Reich, "Bonzo Goes To Bitburg." It was one of the last times Rock was actually important, I think, and it's also a great single; track it down.
Back when I was full-bore into the scene, I thought ROCKET TO RUSSIA was the best Ramones LP. Looking back, I think ROCKET was simply more accessible to a boy raised on melody; it also had a better cover photo and some of the 'professional' sound I was accustomed to. Today I see LEAVE HOME as the best Ramones LP, bar none. There are at least 7 classic Ramones songs here.
Adding the Roxy show makes this great LP a great double LP. Unlike some other live Ramones releases, this catches the band at their energetic peak--August, 1976. Joey's patter between tunes is the greatest.
Meer lezen
31 mensen vonden dit nuttig
Vertaal recensie in het Nederlands

dew1977
5,0 van 5 sterren Fave
29 april 2014 - Gepubliceerd op Amazon.com
Geverifieerde aankoop
The Ramones changed my life. I was 14 and the second the needle hit the grooves of "Blitzkrieg Bop" it was all over. It was what I was waiting for all my 14 years on the planet and didn't even know it. But this album is my favorite Ramones album ever. It's a bit more polished than the 1st but it kicks ass. And it always will. Thanks, guys.
Meer lezen
4 mensen vonden dit nuttig
Vertaal recensie in het Nederlands