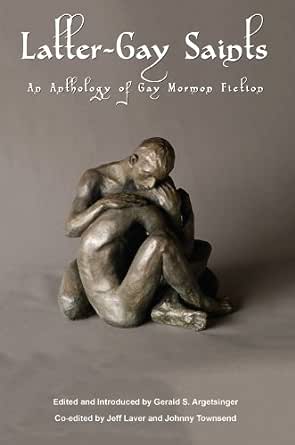 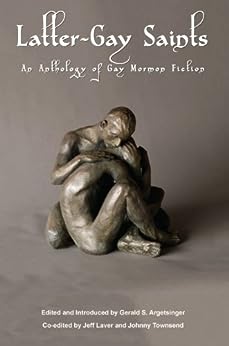 Trevor Cook
4,0 van 5 sterren An Anthology of Gay Mormon Fiction
25 augustus 2013 - Gepubliceerd op Amazon.com
Geverifieerde aankoop
This book is just what it claims to be: an anthology of gay Mormon fiction, written by authors within, without, and formerly of the Mormon Church, from a variety of perspectives. If you are approaching the book as a Mormon wanting to better understand the world of Mormon homosexuality, be aware that many of the stories here are quite graphic.

The collection is well paced, with length and genre of each piece varied nicely, and there is something here that anyone interested in the nexus of gay and Mormon will find interesting. It's very interesting to read pieces from active Mormons like Eric Langford (author of the _excellent_ _No Going Back_) who (as far as I know) toe the Church's line of celibacy for homosexuals alongside (apparently, I've not read much) father of gay fiction Dirk Vanden's "Gay Messiah."

Although I enjoyed the more lighthearted humorous stories, my favorite stories were those that capture the contradictions inherent in the Mormon/gay experience, such as Michael Fillerup's brilliant "The Seduction of H. Lyman Winger" (the dilemma of the sincere Church leader) and Johnny Townsend's "Partying with St. Roch" (the dilemma of the gay Mormon). The plays were also stood out to me as particularly excellent.

If you're browsing gay Mormon literature already, there's probably nothing here that will shock you, but this probably isn't what you want to get your devout Mormon aunt for Christmas. Some of the stories are definitely worth sharing, though. So, enjoy the whole book and, if you want, point out the "inoffensive" (but often really good and thought-provoking) stories to your Mormon friends and family who may find use/enjoyment from them so that this literature that Gerald Argetsinger has so painstakingly brought together can be seen!
Meer lezen
5 mensen vonden dit nuttig
Vertaal recensie in het Nederlands

Jean Roberta
4,0 van 5 sterren Revelations
27 oktober 2016 - Gepubliceerd op Amazon.com
In his introduction, editor Gerald S. Argetsinger explains the need for this big anthology:
“A community is defined, and its values disseminated, through its stories. For most gay Mormons, our stories have been hidden. Officially, they do not exist.”
This reviewer knows the truth of that. From age four to the summer I turned sixteen, I grew up as a “gentile” (unbeliever or outsider) in Pocatello, Idaho, just north of Utah, where the capital, Salt Lake City, is the setting for the Mormon Temple. I knew how important marriage is in Mormon culture even before Mormon boys began seriously proposing that I should marry them and convert.

It was only after I had moved to Canada with my family that I was exposed to the concept of Mormonism as an exotic cult, and of early marriage as the sexual abuse of children. After all, mainstream North American Protestantism also grooms teenagers to look forward to lives of heterosexual monogamy and parenthood, and to think of same-sex crushes as a sign of immaturity or mental illness. Mormonism, as far as I knew it, was simply a more intense and in some ways a more honest version of Christianity.

In his introduction, Argetsinger explains that he agreed to compile material for a planned anthology from a major university press that would examine how the Church of Jesus Christ of Latter-Day Saints is depicted in popular culture, but this publication was cancelled. He goes on:
“I was hooked, so I continued to collect copies of each and every work I could find that included a gay Mormon character and/or theme. It was like a treasure hunt. . . At least ten papers have been presented and five articles published. The bibliography now includes nearly two hundred short stories, novels, and scripts.”

The twenty-five short works in this 336-page book are described as “exemplary” of the whole project. In some cases, they are excerpts of longer works such as plays or novels. They all seem to come from an authentic experience of growing up Mormon and male with a growing attraction to other males. However, the quality of the writing varies, and so do the conclusions that the writers draw from their experiences.

This book is by no means an expose of institutional homophobia by bitter ex-Mormons. Some of the writers describe happy childhoods including religious education that encouraged them to believe in a loving God. Some of them describe a Mormon moral code of individual responsibility which they are unwilling to give up even after they have been accused of rejecting or misunderstanding God’s plan for them.

Several Mormon traditions, as shown in these stories, facilitate same-sex relationships. The missionary experience, in which young men spend two years away from home (often in Third World countries) promoting Mormonism to the local population, encourages the young “elders” who are paired up to develop a close bond with each other. They are taught that mutual reliance is a basis of Christian fellowship, and they are discouraged from losing their virginity before marriage.

Where is the line between close friendship and sexual attraction, and what, exactly, is “sex?” If real sex results in conception, as young Mormons are brought up to believe, then whatever two males can do together doesn’t count.

Jeff Laver, one of the co-editors, describes a boy growing up in an American Mormon family in Lima, Peru, where he develops a crush on a Spanish-speaking missionary from Spain. This is only one story about missionary work in which missionaries are described as attractive young men, partly because of their enthusiasm for the work. In “MTC Interview” by M. Larsen, the narrator describes being tempted by another “elder” at the Missionary Training Center; after confessing to the bishop, the narrator is excused from his missionary duties. In “The Interview” by John Bennion, the central character (Tom) must be interviewed by the stake president when he becomes engaged to his girlfriend. He confesses that he had sexual contact with another young man on a mission, and says he refuses to be a hypocrite. Tom, not the stake president, decides that he is unfit for marriage.

Most of the men in these stories are appealing to the reader, partly because their discoveries of “sin” seem fairly innocent by current social standards. The conflation of religious faith with sexual attraction reaches a peak in “Gay Messiah” by the late Dirk Vanden, in which the narrator drops LSD in a bathhouse on Christmas Eve 1969, and sees himself and all the other men as versions of Jesus. This author, who began writing gay “porn” in the late 1960s after being raised Mormon, was probably the oldest contributor to this book, and one of those who never completely lost his faith despite being effectively disowned as soon as he “came out.”

This collection is worth reading for its diversity. A Mormon childhood, like a Catholic or Jewish childhood, is shown to have a lasting effect even on mature men who left their childhood homes many years before. The roots of the church in the early nineteenth century, and its history of polygamy, are touched on in several stories. However, none of the authors suggest that polygamy (the pairing of one man with several women) could be fruitful grounds for lesbian attraction, parallel to missionary work as a coming-of-age experience for young men. Clearly, this book has only scratched the surface of the stories that could be told.
Meer lezen
Vertaal recensie in het Nederlands