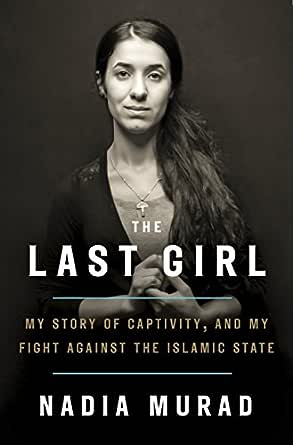 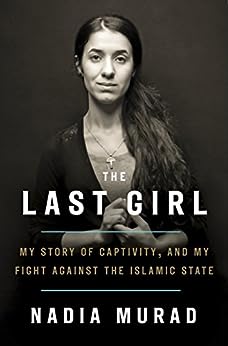 The Last Girl: My Story of Captivity and My Fight Against the Islamic State (English Edition) Kindle-editie

A New York Times Editors' Choice "This devastating memoir unflinchingly recounts Murad's experiences and questions the complicity of witnesses who acquiesced in the suffering of others." --The New Yorker "Her book is sobering--and an inspiration." --People "A harrowing memoir. . . . Intricate in historical context. . . . The Last Girl leaves readers with urgent, incendiary questions." --The New York Times Book Review "Murad gives us a window on the atrocities that destroyed her family and nearly wiped out her vulnerable community. This is a courageous memoir that serves as an important step toward holding to account those who committed horrific crimes." --The Washington Post "This is likely the most inspiring feminist memoir out this year." --Bustle "Nadia Murad's courageous account is horrific and essential reading. . . . Anyone who wants to understand the so-called Islamic State should read The Last Girl." --The Economist "Fascinating." --Vulture

"Surpassingly valuable. . . . With her new book, The Last Girl, Nadia Murad has assumed the stature of an Elie Wiesel for her people. . . . As much as it is an account of the Yazidi genocide, the book is also a loving ode to a way of life that has now been all but obliterated." --Jewish Journal "A harrowing and brave book, a testament to human resilience." --The Progressive "A devastating yet ultimately inspiring memoir that doubles as an urgent call to action." --Kirkus "Brilliant and intense. . . . a clear-eyed account of ISIS's cruelty." --Publishers Weekly (starred review) "Powerful. . . . A heartbreaking elegy to a lost community." --Booklist

Winner of the Nobel Peace Prize

'Those who thought that by their cruelty they could silence her were wrong. Nadia Murad's spirit is not broken and her voice will not be muted' Amal Clooney

'Offers powerful insight into the barbarity the Yazidi suffered alongside glimpses into their mystical culture . . . this is an important book by a brave woman, fresh testament to humankind's potential for chilling and inexplicable evil' Ian Birrell, The Times

'Courageous . . . Anyone who wants to understand the so called Islamic State should read' The Economist

'The pope also recommended reading Iraqi Yazidi Nobel Prize winner Nadia Murad's book, The Last Girl, which he said he had read, commenting that "everything that the world thinks about women is concentrated there . . . However, the world cannot function without women," he insisted' La Croix International

With a foreword by Amal Clooney

A Nobel Peace Prize nominee and the first Goodwill Ambassador the Dignity of Survivors of Human Trafficking of the United Nations and winner of the Vaclav Havel Human Rights Prize, Nadia Murad is a courageous young woman who has endured unimaginable tragedy (losing eighteen members of her family) and degradation through sexual enslavement to ISIS. But she has fought back.

This inspiring memoir takes us from her peaceful childhood in a remote village in Iraq through loss and brutality to safety in Germany. Courage and testimony can change the world: this is one of those books.

Robert M. Levy
5,0 van 5 sterren Impossible to review as a book
21 december 2017 - Gepubliceerd op Amazon.com
Geverifieerde aankoop
This story is so overwhelming that reviewing it as a book is not feasible because this is not a book. It is a story told extraordinarily well and presents many lessens, one of the most interesting being the value of a religion, including those whose foundation and practices many would find strange. The author is a true hero whose life after her capture by ISIS would not be something anyone would wish on their worst enemy. Some stories are so sad they are hard to read. There is nothing hard about reading this very sad but ultimately uplifting journal.
Meer lezen
52 mensen vonden dit nuttig
Vertaal recensie in het Nederlands

Carrie Thomson
5,0 van 5 sterren Important Read
22 januari 2018 - Gepubliceerd op Amazon.com
Geverifieerde aankoop
I read this thanks to the recommendation of a friend and am embarrassed I did not previously know more about the Yazidi genocide in Iraq. I would highly encourage everyone to read this honest and well-written account. In addition to the horror of enduring ISIS, the author also shares the rich and tight-knit Yazidi culture with her reader.
Meer lezen
42 mensen vonden dit nuttig
Vertaal recensie in het Nederlands

Tane Datta
5,0 van 5 sterren Weaponized Rape
27 december 2017 - Gepubliceerd op Amazon.com
Geverifieerde aankoop
This is a powerful story to understand and for civilized people to face. Rape is now a weapon commonly used systematically in war and needs to be addressed as strongly as "Weapons of Mass Destruction" I bought this book to support a person who needs to tell others what she survived. It provided many more insights than expected and I hope to support whatever organization she decides to work in.
Meer lezen
41 mensen vonden dit nuttig
Vertaal recensie in het Nederlands

Can’t choose nickname
5,0 van 5 sterren Shocking account of evil.
9 februari 2018 - Gepubliceerd op Amazon.com
Geverifieerde aankoop
There are sunny people who say things like "There's goodness in everyone!" and encourage us all to share in their oblivious view of humanity. When you encounter those people, tell them to get their heads out of the sand and hand them a copy of this book.

The evil men and women that this brave young woman encountered--they did it in the name of religion. Religious fervor and belief in a "God" seem to be the main source of evil in this world. This book expresses that truth.

Mary Beth Frost (mfrosty@msn.com)
5,0 van 5 sterren A noble but modest young woman describes her ordeal and we learn just what ISIS is truly like. A must-read.
9 juni 2018 - Gepubliceerd op Amazon.com
Geverifieerde aankoop
Nadia Murad is an amazing survivor. She describes in detail her life, her family, her religion and her village in great detail prior to the coming of ISIS, without being maudlin or weepy. And when ISIS comes, she details their deadly methods, their terrible interpretations of the Koran, and their beastly attitudes towards women and, frankly, all non-ISIS members. The language is clear, the moments of horror are told with decorum and not sensationalized. How does one describe rape? How difficult it must have been for her to tell her story. If you want to know what it was truly like under ISIS, this is an excellent book. That she survived and is a leader seeking the return of her family, village and people to their homelands is - noble. Highly recommend this book.
Meer lezen
33 mensen vonden dit nuttig
Vertaal recensie in het Nederlands
Ga naar Amazon.com om alle 216 recensies te bekijken 4,8 van 5 sterren
Terug naar boven
Over ons
Verkoop bij ons
We helpen je graag
© 1996-2020, Amazon.com, Inc. en dochterondernemingen