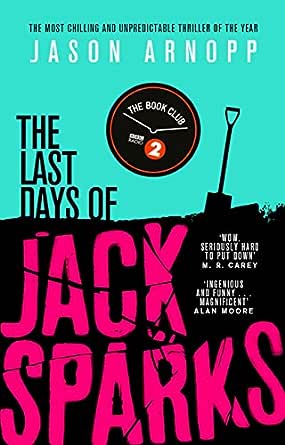 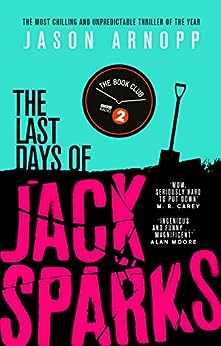 The Last Days of Jack Sparks: The most chilling and unpredictable thriller of the year (English Edition) Kindle-editie

It was no secret that journalist Jack Sparks had been researching the occult for his new book. No stranger to controversy, he'd already triggered a furious Twitter storm by mocking an exorcism he witnessed.

Then there was that video: forty seconds of chilling footage that Jack repeatedly claimed was not of his making, yet was posted from his own YouTube account.

Nobody knew what happened to Jack in the days that followed - until now.

'Brilliantly paced, utterly compelling, I didn't have *a clue* what would happen' Toby Whithouse

'Wittier than the lovechild of Stephen Fry and Charlie Brooker, scarier than watching The Exorcist in an abandoned asylum' Sarah Lotz, author of The Three

'This is The Omen for the social media age' Chris Brookmyre

Look out for GHOSTER, the new razor-sharp supernatural thriller from Jason Arnopp

A chilling and unpredictable thriller about death, the occult and social media. 'Wow. Seriously hard to put down... Chilling and utterly immersive' M.R. Care
Alle bekijken
click to open popover

stachehunter
5,0 van 5 sterren YouTube VS The Exorcist
27 mei 2017 - Gepubliceerd op Amazon.com
Geverifieerde aankoop
"The Last Days of Jack Sparks" is one clever knock-out of a horror novel, in that the author, Jason Arnopp, has figured out how to blend old-school horror tropes with social media addiction in a real page-turner.

Our non-hero, one Jack Sparks, is a self-obsessed narcissist who's risen to fame writing books about "things". Drugs, gangs, etc., all bearing the titles "Jack Sparks On -----". His downward spiral after becoming an addict while writing "On Drugs" hasn't stopped, despite his insistence that he's clean and sober. Fighting the demons of his upbringing and disassociation from family, he becomes supercilious and uber-snarky as he immerses himself into the dregs of human behavior to write best-sellers. His ego takes over, as no one alive says "no" to him. Now, he's taking on the supernatural, and attends an exorcism that will ruin him, because he laughs during the procedure.

Author Arnopp take us on a drug-fueled trip that crosses the ocean, and the belief systems of a seriously messed up writer vs the reality of the supernatural. Jack Sparks is one hard character to like, but the revelations of his life finally reel the reader in. What happens to him is both chilling and heartbreaking, as he becomes a convert to believing in the unseen, through his own machinations on social media. You'll never look at Facebook or YouTube in the same way after reading this book. Time-travel, cocaine, and the death of a number of supporters, friends, and yes, enemies will seriously mess your head up if you can finish this amazing novel.
Meer lezen
17 mensen vonden dit nuttig
Vertaal recensie in het Nederlands

Kindle Customer
5,0 van 5 sterren An incredibly tense read. A fresh horror classic.
1 oktober 2016 - Gepubliceerd op Amazon.com
Geverifieerde aankoop
This book gives us a protagonist who is right up there with Ignacious Riley of Confederacy of Dunces in his level of self-delusion and self destructive ego. The guy is breathtakingingly, eggregiously, self-centered. Somehow though, the author manages to make us like him. That is an amazing feat.

The book is very clever in that the conceit is that the book you are reading is the book that Jack Sparks is writing in the story. It contains author's notes to his editor written in amongst the paragraphs and, as the book is supposedly published posthumously, contains after- the-fact interviews of the other characters who interacted with Jack. These interviews and writings are an interesting addition as they give depth to characters that Jack neglects due to his self-centeredness and also reveal another side to Jack himself that he himself seems loathe to admit.

In terms of being a "horror" novel, it is very successfull as well. It kind of freaked me out to tell the truth and I am not very freakoutable. I almost found the stress level too much - the diabolical plotting of the villain is just mind-boggling in it's relentlessness. I had to put the book down towards the end to take a moment of zen and relax.

All in all, this is an excellent "horror" novel that could and should be found on the more hallowed shelves of the "Literature" section.
Meer lezen
10 mensen vonden dit nuttig
Vertaal recensie in het Nederlands

Kindle Customer
5,0 van 5 sterren THE Pre-Halloween Spooky Read!
17 oktober 2016 - Gepubliceerd op Amazon.com
Geverifieerde aankoop
Oh wow. What a great book!!! The protagonist is disgusting in the way Patrick Bateman was, although their narcissistic ways comprise most, if not all, of any similarities between these two men.
Jack is enough to bring bile up from the depth of our stomachs in his numerous examples of the many ways in which he is vastly superior to all other people. Yet amazingly, the author somehow gets us to like this guy...to start to relate; to develop a kinship.
Oh, there is so much I can say to sing this book's endless praises. Instead, I urge you to take a peak yourself, at the 1st few pages only. If you are not drawn to obtain the book in its entirety fairly soon after you examine these beginning pages, I'll be shocked.
I don't even remember another exorcism/demon possession story that hit me like The Last Days have. It's such a witty book! I recommend it at the top of my lungs! The best scary book I've read this year, without a doubt!
Meer lezen
9 mensen vonden dit nuttig
Vertaal recensie in het Nederlands

Keith Chartier
5,0 van 5 sterren A Home Run for Supernatural Fiction.
10 oktober 2016 - Gepubliceerd op Amazon.com
Geverifieerde aankoop
THE LAST DAYS OF JACK SPARKS by Jason Arnopp (TLDOJS) is the best novel I've read all year, outdueling Paul Tremblay (A HEAD FULL OF GHOSTS and DISSAPEARANCE AT DEVIL'S ROCK) for author crown of writing unreliable, supernatural narrative. It is this unreliable narrative by Jack Sparks himself that gives this gem of a story life. Among other things, the character of Jack Sparks is cocky, egotistical, and instantly disliked by the reader, but the author cleverly interjects the Sparks' narrative with chapters explaining how unreliable his version of the truth really is. By doing this, the author Arnopp further enriches the reading experience and deepens the mystery of how, and why, Jack Sparks eventually dies. And once finished reading this masterpiece, you can't help but applaud how the author has tied everything together into a WTF moment that makes you only want to dive right back in, rereading the book all over again.

More importantly, TLDOJP is terrifying. There are moments of creepiness that truly gave me goosebumps. This rarely happens for me, especially reading. Jason Arnopp has hit a home run with his first novel, and I can't wait to discover whatever else this author conjures up.

The highest of recommendations