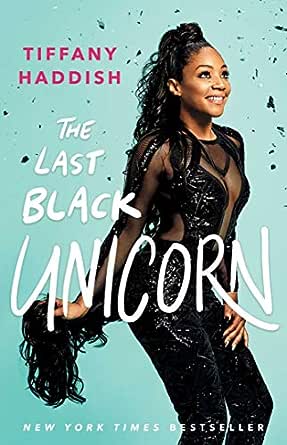 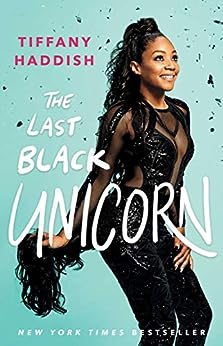 “An inspiring story that manages to be painful, honest, shocking, bawdy and hilarious.” —The New York Times Book Review

From stand-up comedian, actress, and breakout star of Girls Trip, Tiffany Haddish, comes The Last Black Unicorn, a sidesplitting, hysterical, edgy, and unflinching collection of (extremely) personal essays, as fearless as the author herself.

Growing up in one of the poorest neighborhoods of South Central Los Angeles, Tiffany learned to survive by making people laugh. If she could do that, then her classmates would let her copy their homework, the other foster kids she lived with wouldn’t beat her up, and she might even get a boyfriend. Or at least she could make enough money—as the paid school mascot and in-demand Bar Mitzvah hype woman—to get her hair and nails done, so then she might get a boyfriend.

None of that worked (and she’s still single), but it allowed Tiffany to imagine a place for herself where she could do something she loved for a living: comedy.

Tiffany can’t avoid being funny—it’s just who she is, whether she’s plotting shocking, jaw-dropping revenge on an ex-boyfriend or learning how to handle her newfound fame despite still having a broke person’s mind-set. Finally poised to become a household name, she recounts with heart and humor how she came from nothing and nowhere to achieve her dreams by owning, sharing, and using her pain to heal others.

By turns hilarious, filthy, and brutally honest, The Last Black Unicorn shows the world who Tiffany Haddish really is—humble, grateful, down-to-earth, and funny as hell. And now, she’s ready to inspire others through the power of laughter.
click to open popover

Thomas Swaak
5,0 van 5 sterren Unicorns are there to carry the strength of our hearts
7 augustus 2018
Geverifieerde aankoop
Forthright, raucous, relentless and with such vulnerability that one’s own hidden pockets of difficult memories are triggered, and sometimes even healed through the humor and fortitude in these pages. Tiffany leaves a diamond in the rough with tears and laughter, her own and the reader’s, which put a sparkle to it that sustains through and through.
Meer lezen
Nuttig
Commentaar geven Misbruik melden
Vertaal recensie in het Nederlands
Alle 1 klantenrecensies bekijken
Klantenrecensie schrijven

Tengel
5,0 van 5 sterren I want what Tiffany Haddish is having...
6 december 2017 - Gepubliceerd op Amazon.com
Tiffany Haddish is just getting started. I first saw her do standup in LA, and even thought she was mixed in with more familiar names at the time, she stood out not just for her amazing humor, but her infectious, happy attitude. Read this book, and you're sure to be inspired to look at life's blessings...and challenges...with appreciation (rather than entitlement), resilience and laughter...a lot of laughter. I love this woman so much. The entertainment industry needs more like her, and I look forward to seeing her on stage, on screen and on best seller lists for years to come! Thank you Tiffany Haddish for being true to yourself and a breath of fresh air in Hollywood.
Meer lezen
239 mensen vonden dit nuttig
Vertaal recensie in het Nederlands

I Buy Stuff
3,0 van 5 sterren I love listening and watching TH’s interviews
12 maart 2018 - Gepubliceerd op Amazon.com
Geverifieerde aankoop
I love listening and watching TH’s interviews. They cheer me up when I’m down and inspire me. I don’t watch her stand up because I don’t connect with it. Because of how much I like her, in general, I bought this book. I give it five stars for honesty and openness. But, I am one of those who is bothered by excessive profanity. I wish her every good thing, every blessing, every success & I am pretty amazed at her ability to face and work through tough, hard, painful events. I have zero criticism for her book - only that my personal tolerance for the vulgar language was taxed. That’s on me. Congratulations to Tiffany Haddich & a ‘thank you’ for her generosity of spirit.
Meer lezen
54 mensen vonden dit nuttig
Vertaal recensie in het Nederlands

Sika6061
5,0 van 5 sterren The Greatest Last Black Unicorn
29 januari 2018 - Gepubliceerd op Amazon.com
Geverifieerde aankoop
In the middle of reading this book, I was laughing at one of the many hilarious parts, and my husband asked me, "What is going on with you today?" I looked up and said, "Honey, is it wrong to have a non-sexual girl crush on Tiffany Haddish?" My husband said, not missing a beat, "A non-sexual girl crush? ...Yes."

Well folks, if loving Tiffany Haddish is wrong, I don't want to be right. This book is awesome sauce. It is an unflinching memoir that I hope will be as legendary as she probably will. This woman is a magical creature. I admire the hell out of her. I read it in 24 hours and couldn't put it down. You will laugh like a crazy person, cry like another one, but most of all you will get a glimpse into the mind of a comic genius. I hope nothing but good things for this incredible woman. She deserves all the best things in life. I am a fan, and after reading this, if you have a beating heart in your chest, you will be one too. One of the best memoirs I've ever read! Keep being you girl!
Meer lezen
122 mensen vonden dit nuttig
Vertaal recensie in het Nederlands

Micki
5,0 van 5 sterren Honest writing and unforgettable read.
6 december 2017 - Gepubliceerd op Amazon.com
Geverifieerde aankoop
I started reading this book and I couldn't put it down. Tiffany's story is unimaginable and she has emerged able to conquer the world. I laughed, I cried, I cried while I was laughing. It is well worth the read.
Meer lezen
127 mensen vonden dit nuttig
Vertaal recensie in het Nederlands

MariTi Lovell
5,0 van 5 sterren This isn`t meant to be a book written by a College English Professor. It`s meant to be more relate-able.
1 februari 2018 - Gepubliceerd op Amazon.com
Geverifieerde aankoop
I fell in love with Tiffany Haddish after seeing her do an interview on Trevor Noah`s Daily News show. Her personality and sense of humor is just amazing and pulls you in. So when she started giving stories from her book about dating and religion and just life in general I definitely felt like I had to read.

Her writing style isn`t your conventional Shakespeare style, I`ve earned my Doctorate in Creative Writing sort of read. It`s very easy to read and very down to earth. It`s like she could be standing right next to you telling you this story as though you were best friends sharing laughs, tears and life. Some parts are particularly heavy because her life was far from being rainbows and unicorns (though she is the Last Black Unicorn), but she tells it in a way that reminds be of my own mother. Even when they are talking through their most painful moments they still find a way to help you Laugh at their Pain and your own so that you don`t walk away feeling worse about any of it but instead feeling stronger and refreshed.