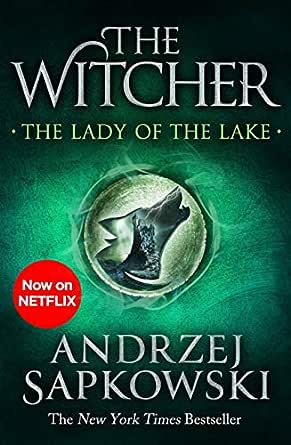 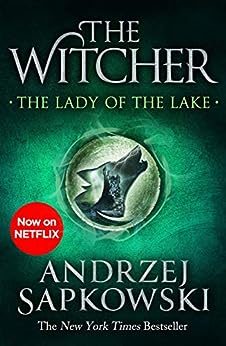 The Lady of the Lake: Witcher 5 – Now a major Netflix show (The Witcher) (English Edition) Kindle-editie

"This is a series you can sink your teeth into."--BuzzFeed News

"The Lady of the Lake is, without any doubt, the best and most profound fantasy novel I have ever read. It is hard to put down, yet also a challenging and deeply rewarding book. And it is genuinely moving. I have never read a fantasy series like this, and suspect I never will again."--Nerds of a Feather

"The Witcher delivers one of the most intense and rewarding role-playing experiences this year."--GT Reviews on The Witcher video game

"New battle mechanics, a fantastic storyline, and a gritty setting make The Witcher one of the most engrossing, mature RPGs to arrive on the PC in years."--Gamespot.com on The Witcher video game

After walking through a portal in the Tower of the Swallow, thus narrowly escaping death, the Witcher girl, Ciri, finds herself in a completely different world... a world of the Elves. She is trapped with no way out. Time does not seem to exist and there are no obvious borders or portals to cross back into her home world.
But this is Ciri, the child of prophecy, and she will not be defeated. She knows she must escape to finally rejoin the Witcher, Geralt, and his companions - and also to try to conquer her worst nightmare. Leo Bonhart, the man who chased, wounded and tortured Ciri, is still on her trail. And the world is still at war.

Andrzej Sapkowski was born in 1948 in Poland. He studied economy and business, but the success of his fantasy cycle about the sorcerer Geralt of Rivia turned him into a bestselling writer. He is now one of Poland's most famous and successful authors.
Meer lezen

Poisoned Blade
5,0 van 5 sterren Even The Wildest Rides Come To An End (Spoiler Free Review)
11 mei 2017 - Gepubliceerd op Amazon.com
Geverifieerde aankoop
The Lady of the Lake is the final book in the Witcher Saga, but the story is extended in the Award Winning Witcher Video Game Series. Reading these books makes me appreciate the stories of the games even more. If you're not a gamer, this is the glorious end of an epic adventure.

The Witcher Saga is a complex story about powerful kings, sorceresses, emperors, lords, assassins, spies, and criminals battling each other in wars, diplomacy, rhetoric, and deceit. This battle is set in a dangerous world based on folklore with mythical monsters and powerful magic. Geralt of Rivia, a professional monster slayer, is drawn into a tangled web of intrigue when his adopted daughter from a unique and powerful bloodline draws the attention of the major powers in the world. Accompanied by his most loyal friends, Geralt battles his way to the end of the world to help Ciri as she tries to evade enemies as ambitious as they are deadly.

The world of the Witcher is populated with greedy simple minded peasants, deadly beasts, ancient evils, curses, and almighty kings. This story adds credibility to the old folktales and brings them to life. Because this series is rooted in folklore, it seems more genuine.

The characters are complex with their own motivations, emotional scars, rivalries, and alliances. You get to know them so well, you’ll start laughing out loud at their mannerisms and grumblings.

The story structure jumps all over the damn place, but it seems to work. A major event will happen with the main characters. A scholar from Oxenfort will discuss its impact on history 100 years in the future, a band of mercenaries at a campfire will talk about the legend, and the saga will resume with the main characters. This ads depth and broadens the world, and it works. In any other book series, this would have been a terrible distraction.

The action is visceral and has dire consequences. There are wizard duels, beasts, skirmishes, brawls, wars, battle tactics, chases, and assassinations. It's all very well written and puts you in the middle of the action.

These books have some swearing, torture, sex, graphic violence, and horror. They are not for kids.

You'll need to read the other books in the series to understand The Lady of the Lake. Reading these out of order would be like taking all of the Game of Thrones Episodes and shuffling them. It's not something you should ever do.

Overall, this is a great saga about a drinking, whoring, gambling, lout, who proves his love for his adopted daughter by risking everything and battling his way to the ends of the world for her. The characters and world are complex. The action is great. The fantasy and lore is very well developed. The pacing stalls at times and the story skips around a bit, but these are the only gripes I have with this series. Geralt of Rivia is one of my all-time favorite characters and his story is legendary.

If you enjoyed these books, I highly recommend the Witcher Games. The stories in the books act as "Choose your own adventure" and the decisions you make ultimately determine who lives and who dies. The Witcher 3 is the greatest game I have ever played.
Meer lezen
48 mensen vonden dit nuttig
Vertaal recensie in het Nederlands

Maverick
2,0 van 5 sterren Spoiler alert!!!! after first few sentences.
25 juni 2018 - Gepubliceerd op Amazon.com
Geverifieerde aankoop
The book was all over the place with irrelevant stories.. All I wanna read about is Geralt and his companions. All the books before this I thought the story with Geralt and his companions was 4-5 stars.... It did get annoying when the book would have 10 pages talking about the politics of the world.

The story line with Jarre was okay, but the whole Ciri travelling to different realities was really weird. The beginning of the book made no sense to me. Was she in our reality or what? One of the last parts was really cheesy. "I wanna see the Sun," C'mon man. Then Geralt's fight with a mob... He's fought much worst opponents and decimated them... When the series introduced "The Lodge of Sorceresses" I was excited to see what kind of crazy stories they would have but yet those parts seemed to be one of the most boring and annoying. Overall the series was really good, Except for this last book. Very disappointing ending, I'm so glad CD Projekt Red took a new turn and made this fantasy world spectacular. All 3 of the Witcher games' stories are a 10/10 for me... These books really changed the way I thought of some characters. Dandelion is great, Triss is amazing, and Geralt's dwarf friends are awesome. The biggest change of my opinion would have to be Yennefer though. I really disliked Yennefer after reading the books and finding out more about her personality/past... and finding out what she really is behind all that magical make-up lol
Meer lezen
19 mensen vonden dit nuttig
Vertaal recensie in het Nederlands

Richard
4,0 van 5 sterren 2,700 pages later, a good ending for a great series
14 november 2018 - Gepubliceerd op Amazon.com
Geverifieerde aankoop
Some fantasy series are designed to be read one at a time. If you're taking on Le Guin's Earthsea series for example, or Leiber's Fafhrd and Gray Mouser books, you can finish one, read something else, then come back to the series later, and you don't feel as though you need a refresher.

Other fantasy series need to be read from start to finish in one go. It's hard to think of the books in those series as individual works, since they all hang together as one--they succeed or fail based on how the series reads as a whole. Sapkowski's Witcher series fits this category pretty well, which is why I've waited until now to review any of them.

The good news is, Sapkowski's writing starts strong and ends even stronger. From the first page of The Last Wish to the last page of Lady of the Lake, he weaves together well-developed characters and smart storylines. He's not as poetic as some writers, but when he pauses his driving plot to make a point, it's disarming and beautiful. (Good example: the heartbreaking scene of starving elves crossing in front of Jarre's wagon after the war. Magnificent.)

Also, the story is satisfying. Plotwise, there are plenty of clever twists and turns, nearly all of which get resolved in clever ways--sometimes in favor of the protagonists, sometimes not. And Sapkowski isn't afraid to kill his darlings either, which is something I admire. It can't be easy to bump off characters you've spent hundreds and hundreds of pages shaping.

And as you probably know by now, he's a master at world-building. The setting of the Witcher series is foreign but familiar. That not only makes the story memorable, but also presents some interesting hypotheses about our own planet.

The bad news is, the ending of the series falls flat. Even though Sapkowski had over 2,700 pages to wrap up the story, the conclusion feels rushed--like he realized that the deadline he'd given his publisher was three days away, and he said to himself, "I've got to shut this thing down." Not that I could've done any better in his place, but I spent several weeks reading these books, and Sapkowski himself spent decades writing them. I'd have liked something that left me dazzled, and I'm sure he would've, too.

What I'm trying to say is, if you sat through every episode of The Sopranos and wanted more from the series ending, you may have a problem here.

Also, some of the metaphors and themes Sapkowski brought up throughout the series never really paid off. I suppose we got a satisfying explanation of his notions around destiny, but all that chatter about mistaking the stars reflected on the surface of the lake for the night sky? There's one reference to it near the climax of the last novel, but it's subtle enough that it makes me wonder, "Wait, was that it?" Maybe it reads better in Polish. (I wouldn't mind some clarification about the physics of Sapkowski's world either, like the mechanics of the Conjunction of the Spheres, but I can live without it.)