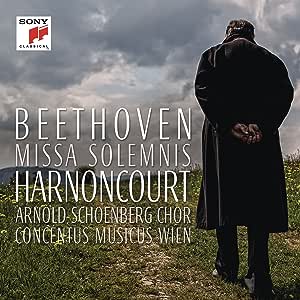 FerencCT
5,0 van 5 sterren POSSIBLY A NEW ADDITION TO REFERENCE RECORDINGS OF THE MISSA SOLEMNIS
20 augustus 2016 - Gepubliceerd op Amazon.com
Geverifieerde aankoop
POSSIBLY A NEW ADDITION TO REFERENCE RECORDINGS OF THE MISSA SOLEMNIS. I pre-ordered this and received it about July 15th,the release date. I am surprised that there has been no "review,"commentary et al about this release which I would characterize as a rather major release,considering the work involved(the Missa-one of the most difficult within the "classic/classical"-not including works considering "modern"[post-Mahler] and that is being seen as the last PURPOSEFUL release of a major contributor to classical music/recordings..Nikolaus Harnoncourt). The recordings of the Missa Solemnis that I own;Klemperer/Philharmonia[long considered a reference],Gardiner, ORR on DG[considered a reference using historically-informed performances,Toscaninni,NBC Orchestra,RCA/SONY etc[another reference recording],,Masur,NY Philharmonic(NYPHIL private label) and George Szell/Cleveland
Orchestra/Cleveland Orchestra Private Label-Szell Centenary. First of all, I am not a professional musician. I've had music lessons,have been listening to classical and jazz recordings close to 40 years. Beyond that,i can have an eclectic taste in music. Considering that, it is almost impossible for me to present myself as an expert,especially on such a work as the Missa and the fact that I have been listening to this Harnoncourt recording(versus the others in my collection) for a MERE month. At this point, I can only give general perceptions. Upon my initial listenings of the Harnoncourt, I was very impressed. The technical recording quality leaves nothing to be desired. Many times I am rather put of by so-called "live"recordings which end up being a cut and paste collection of several live performances and then,"patch" recordings. One is left with the sense of the Harnoncourt as ONE total performance. Also,one does not get the sense of other negative features of "live" recording;close miking,audience noise etc. TECHNICALLY,it is outstanding. In terms of the interpretation,Harnoncourt seems to have found a perfect combination between Klemperer's performance(granitic,monolithic,possessing grandeur but can seem slow when listening to other HIP) and say,Gardiner(who,some may find too fast).Reviewing what I own;Klemperer-at times seems slow as I listed to the others but still completely competitive especially when one is in the "mood" for a Klemperer recording- Toscanini, I had not listened to toscanini in quite a while but his performance is dramatic and I find no drawbacks except for the recording quality-somewhat aged and "dry" but that goes by the wayside as one begins to listen- Gardiner,again very good,some may find it too fast but I don't get that sense at all. Gardiner may be faster than Klemperer at places in the Missa where tempi are faster but I never got a sense of "breathless" phrasing-Szell,this is a specialtysince it was only part of the Szell Centennial Collection,in a sense closer to Toscanini but with better sound(I like Szell and the Cleveland Orchestra so I do like this performance)-the Masur will be another specialty since it was a NY PHIL private label performance-I found it to be very listenable. THE BOTTOM LINE-considering the Harnoncourt recording-HIGHLY RECOMMENDED. I do not know how many recordings of the Missa Solemnis that each of you have BUT if you can consider one more I would feel free to strongly recommend the Harnoncourt performance.

There is a DVD available of Nikolaus Harnoncourt leading the Concertgebouw in Beethoven’s Missa solemnis, a grand, thrilling, exquisitely played performance. Why then, would Harnoncourt, in his last days, want this new performance put down for posterity?

Well, first of all, it’s with his own band and choir, on period instruments, and more importantly, the new one is more devotional, less extroverted overall, and particularly seeking and inward. The text and Beethoven’s changes in emphasis, doubts, and fears are all taken very literally: Harnoncourt takes nothing for granted and avoids bombast at every turn.

Big moments are big because the supplicant’s cry needs to be heard. He conducts almost without his own thoughts and eccentricities and takes Beethoven at his word, dynamics, and note values. Beethoven scribbled “with devotion” in the score a dozen times, and Harnoncourt is here devoted to Beethoven.

I certainly wouldn’t call it subdued, however – it’s just temperate. The Gloria in general is joyful but never maniacal. The opening of the Credo never leaves the concept of believing in doubt. The “et resurrexit” is full of wonderment, the orchestra and chorus do a dance right after the a cappella section. “Et vitam venturi” is spotless and clear. The violin solo in the Benedictus enters as if it doesn’t wish to intrude; the quiet singing of the soloists that follows is ravishing. The Agnus Dei is grief stricken.

The solo quartet is light-voiced but substantial, making their roles sound less strenuous than can normally be the case, particularly in the examples of Laura Aikan’s lovely soprano and Johannes Chum’s sweet-toned tenor. The chorus is spectacular and so is the orcherstra–a veritable extension of Harnoncourt’s arm. The sound is devoid of any glare, even in the brassiest passages, but clear and thrilling nonetheless. A unique Missa solemnis, up there with its great, bigger brothers under Otto Klemperer (EMI) and Bernstein (DG).

This is a remarkable account of Beethoven's Missa Solemnis. In no sense lacking in drama, it is in essence, and aptly so, a deeply devotional reading. The soloists were clearly hand-picked for the enterprise, not least the tenor Johannes Chum, whose singing can best be descirbed as seraphic. The recording is mellow-toned yet crystal-clear, so beautifully adjusted are the balances between solo and choral voices and the lovely sounds of the orchestra's old instruments. It's not difficult to see why the late Mr. Harnoncourt wished this recording to be, in some sense, his personal legacy.

H. Powders
5,0 van 5 sterren Terrific recorded sound
22 januari 2018 - Gepubliceerd op Amazon.com
Geverifieerde aankoop
Magnificent. Completely uncontroversial. Extremely moving, performance. Mainstream tempos. Terrific recorded sound. Soloists and chorus extremely fine. Performed by his own HIP orchestra, but here, hardly noticeable. For me, this eclipses the fine Klemperer recording, which is now sounding a bit old-fashioned and "Romantic" to these ears.
My only criticism is the pronunciation of "Credo" as “cree-doh” instead of the more generally accepted “creh-doh.”
This is Harnoncourt's final recording-a composite of some live performances. He died eight months later.
One of the finest recordings ever of a Beethoven work.
If you love the Missa Solemnis, this one is a must!
Meer lezen
2 mensen vonden dit nuttig
Vertaal recensie in het Nederlands