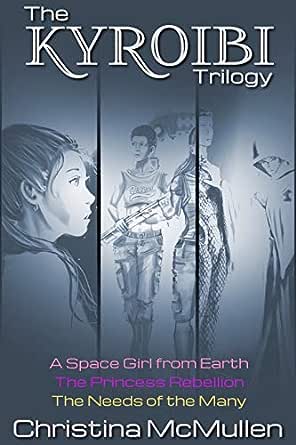 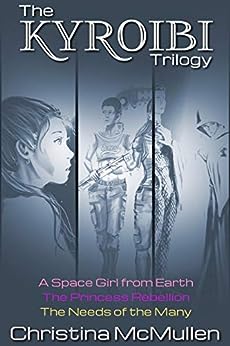 As the awkwardly tall and oddly-complected daughter of two celebrities, Ellie Whitmore thought her life was about as extraordinary as it could possibly get. Never in a million years would she have guessed she was actually an alien from a far away star system. And she certainly never expected to discover she was destined to lead a rebellion against a tyrant who would stop at nothing to possess the Kyroibi, an ancient relic hidden deep within her genetics.

Suddenly, instead of worrying about the paparazzi, Ellie finds herself traveling the galaxy on a mission to save her people from a cataclysmic war between worlds. To restore peace, she must first unlock the Kyroibi's secrets. But as she quickly discovers, ancient secrets do not stay secret for countless lifetimes by being easily revealed.

This collection contains all three books in The Kyroibi Trilogy:
A Space Girl from Earth
The Princess Rebellion
The Needs of the Many
click to open popover

D. M. Ossenkop
3,0 van 5 sterren Good Enough to Finish
17 oktober 2019 - Gepubliceerd op Amazon.com
Geverifieerde aankoop
I didn't like the first few chapters and how everything took off so quickly. I felt like things kept working out a little too efficiently and characters took ages to die (even though no one ever seems to really die). I really did like Mikk.
Meer lezen
Vertaal recensie in het Nederlands

Books and Things
5,0 van 5 sterren high stakes
15 november 2018 - Gepubliceerd op Amazon.com
With a lovable cast of characters, fun world-building and clever pacing, this series hit all the right buttons for me.

Here are my reviews of the individual volumes:

I enjoyed this brilliant blend of sci-fi, action, humor, emotion, and touching romance. This author is not new to me, and I daresay this was her best book yet. The characters, places, and storytelling were vibrant, and kept me turning pages well into the night. Can't wait to read what happens next!

Loved the first book! This, too, was well-written. I enjoyed the unveiling of the different worlds, as well as the introduction of some fab new characters. The story line is has deep elements of human rights and social justice intertwined with the fantasy and sci-fi. Looking forward to seeing how Ellie and Julian's story plays out in book three.

The stakes are high in this one! Each world is more fascinating than the next, as is the world beyond, which I won't get into right now. But feel free to read about it for yourself. Suffice it to say that this final volume is deep, clever, and thought-provoking, with an exciting build and pacing that's spot-on.