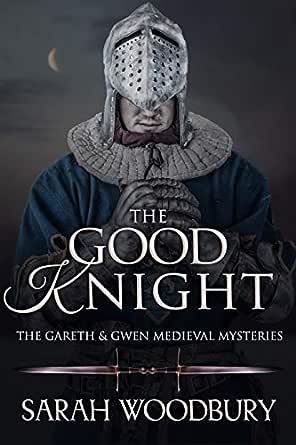 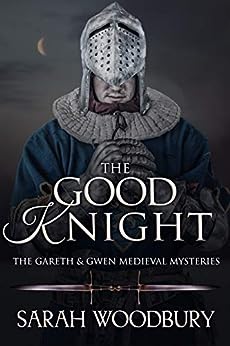 Join Gareth & Gwen in their first mystery together ... murder, intrigue, and romance in medieval Wales!

Five years after Gareth walked away from Gwen in disgrace, she encounters him in the aftermath of an ambush, standing over the body of a murdered king. Although it isn't exactly the reunion Gwen had dreamed of, she and Gareth join forces against the treachery and intrigue rife within the court of Gwynedd.

And once blame for the murder falls on Gareth himself, Gwen must continue her search for the truth alone, finding unlikely allies in foreign lands, and ultimately uncovering a conspiracy that will shake the foundations of Wales.

Join Gareth & Gwen in their first mystery together ... Intrigue, suspicion, and rivalry among the royal princes casts a shadow on the court of Owain, king of north Wales... The year is 1143 and King Owain seeks to unite his daughter in marriage with an allied king. But when the groom is murdered on the way to his wedding, the bride's brother tasks his two best detectives-Gareth, a knight, and Gwen, the daughter of the court bard-with bringing the killer to justice. And once blame for the murder falls on Gareth himself, Gwen must continue her search for the truth alone, finding unlikely allies in foreign lands, and ultimately uncovering a conspiracy that will shake the political foundations of Wales. The Good Knight is the first Gareth & Gwen Medieval Mystery.
Alle bekijken
click to open popover

J.C. Prins
5,0 van 5 sterren Surprisingly Good
21 mei 2017 - Gepubliceerd op Amazon.com
Geverifieerde aankoop
I was not sure what to expect from this book. Historical mysteries set in the Middle Ages are so hit and miss. While following the numerous characters and the various storylines was tricky at first, everything came together to form a coherent tale. My only quibble is that in the first half of the book, Gareth ponders Hywel's movements during his solo trip through the mountains as if we, the readers, knew Hywel had been somewhere around during the ambush of Anarawd (not a spoiler). I went back and reread several passages and could find no antecedent reference to Hywel in that context, so it was confusing. However, as noted, during the first part of the book, quite a number of events are briefly, but not fully, discussed even though they really have nothing to do with the story, except to, for example, demonstrate that mystery solving is nothing unusual for Gwen. However, the whole thing pulls together to form a satisfying mystery and compelling adventure. It also made me want to explore Wales. I will definitely continue reading the series.

Addendum: While I had quibbles about confusion at first, the story, as a whole, is worthy of more than the average 4.1 stars it now rates on Amazon. I would highly recommend this book. Further, I would strongly encourage people to read the first sections without over-worrying about the confusing parts. It all makes sense in the end, actually, long before the end. I finished the book and rated it 5 stars, because of how much I liked it and how satisfying I found the resolution. I have now read all of the Gareth and Gwen novels and fully recommend them. Since last book came out in May, I believe, with great hope, that the series is not over. I have also read the Last Pendragon Saga and the Lion in Winter series and really enjoyed them as well. I will be starting the After Time series next. My main quibble with the various series is that the same names are used: Gareth, Geraint, Gawain, Owain, Hywel, etc. Sunce I read very quickly and move from one novel to the next (with intermissions for Netflix binge watching), so I find myself envying later characters with the attributes of the previous characters of the same name. It can be very disconcerting. Otherwise, I have enjoyed all of the books very much. On to the next!

Finally, for clarification, this is the first full novel in the series of Gareth and Gwen. There is, however, a novella, The Bard's Daughter, that goes through the period of time around when Gwen first met Gareth and her father was accused of a murder, which is obliquely referenced in a Good Knight. Reading it first, will put things in order of occurrence, more fully develop the characters of Meilyr and Gwalchmai, and make the first parts of The Good Knight a little less confusing.
Meer lezen
56 mensen vonden dit nuttig
Vertaal recensie in het Nederlands

Bethany Swafford
4,0 van 5 sterren Clean, Fun Mystery
2 juni 2019 - Gepubliceerd op Amazon.com
Geverifieerde aankoop
The daughter of the bard is in the perfect position to keep her eyes and ears open for information. When Gwen and her family come across an ambush, and the man she loved investigating what had happened, she becomes swept into solving the mystery.

The writing for this novel is clean, crisp, and I love it. The characters come to life from the first you meet them. I especially love Gwen and her courage. I didn't know much (anything!) about Welsh history, so I found it fascinating that this revolved around an actual historical event.

I will admit that many of the names are tongue twisters for me, so I kind of guess in my head how they are supposed to sound. This is the first book of a series and I am looking forward to reading them all from start to finish.

Warren A. Lewis
5,0 van 5 sterren A Welsh Legend
14 augustus 2016 - Gepubliceerd op Amazon.com
Geverifieerde aankoop
This is a fictional narrative based on Welsh history from the year 1143. King Anarawd, a territorial king, is promised to marry the daughter of King Owain Gwynedd, another territorial king. However, on the way to the wedding, King Anarawd and his party are ambushed and he is slain. Sir Gareth, who is sent to escort the king to the festivities, comes upon the scene and finds the deaths. He and his entourage is attacked as he starts to return with the news. but fights off the attackers. On his return he is accused of the murder. It is up to Gareth, the princes, who are brothers of the bride, and Gwen, one of the event's entertainers, to solve the murder and free Gareth. The romantic twist between Gareth and Gwen ignites throughout the story. It does start a little slow, but the book becomes hard to put down until the end, when a most unusual twist is totally unexpected.
Meer lezen
19 mensen vonden dit nuttig
Vertaal recensie in het Nederlands

Virginia Heard
5,0 van 5 sterren I enjoyed this book
27 maart 2017 - Gepubliceerd op Amazon.com
Geverifieerde aankoop
I enjoyed this book !! It is labeled as #1 but references seem to indicate I missed one !! Trying to describe the "mood" was rather difficult !! There is an entire range from funny to dark to tragic !! I like the characters of Garth and Gwen and I having detectives in the early time setting is unusual !! I do believe there were more Kings than every day people though !!!! The tale has a lot of twists,betrayals, turns and surprises and I had to pay pretty close attention but the biggest surprise was at the end when the killer was revealed !!! I do not want to ruin plots for future readers so I will just say THANK YOU FOR THE GOOD ENTERTAINMENT !!!
Meer lezen
13 mensen vonden dit nuttig
Vertaal recensie in het Nederlands

Moe Hoar
4,0 van 5 sterren Quite the adventure
31 maart 2017 - Gepubliceerd op Amazon.com
Geverifieerde aankoop
I connected with Gwen right away. I work for a forensic pathologist and love to follow the clues to solve mysteries. That is what Gwen does as well. The cast of characters around her were a great background to her world of spying and intrigue. This is based on historical facts so it made it all the more gripping. I will continue with the series. It's very well done.
Meer lezen
10 mensen vonden dit nuttig
Vertaal recensie in het Nederlands
Ga naar Amazon.com om alle 767 recensies te bekijken 4,2 van 5 sterren
Terug naar boven
Over ons
Verkoop bij ons
We helpen je graag
© 1996-2020, Amazon.com, Inc. en dochterondernemingen