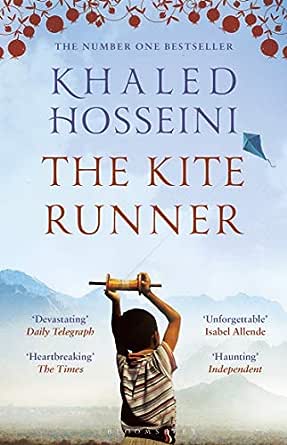 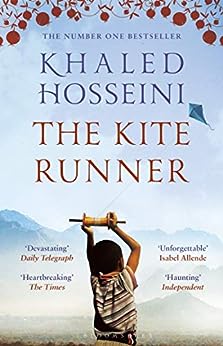 The first of the defeated kites whirled out of control. They fell from the sky like shooting stars with brilliant, rippling tails, showering the neighbourhood.

Amir and Hassan grow up together in Kabul. Amir in the beautiful house his father built, filled with marble, gold, tapestries and mosaics; Hassan in the modest mud hut in the servants' quarters.

The two are inseparable, and when twelve-year-old Amir is desperate to win the local kite-fighting tournament, his loyal friend promises to help him. But neither boy can predict what will happen to Hassan that afternoon – as the kites soar over the city – and how it will change their lives forever.

The remarkable debut novel from Khaled Hosseini, now out in a film tie in edition

Concerned adult
1,0 van 5 sterren Why is this book on approved high school reading lists?
6 februari 2019 - Gepubliceerd op Amazon.com
Geverifieerde aankoop
I had never heard of this book until last September at back to school night. My daughter's sophomore English teacher listed the books they would be reading this school year and as he read off Kite Runner, he said "it had one disturbing part". Well, that meant I needed to read it before my daughter did.

I found many more than one part of it disturbing especially as a novel for teenagers. Kite Runner is dark, depressing, descriptive of violence and in my opinion, not a good choice for high school students.

Khaled Hosseini is a talented writer but I fail to understand why high school students should be analyzing a fictional novel dramatizing so many dark topics and adult subject matter. I thought I had read the "one disturbing part" in Chapter 7, homosexual rape, but Kite Runner continues with a series of painful, life altering, distressing and depressing event after event throughout the book to the very last chapter.

I've never read a book with so much trauma happening to it's characters (and then I read Hosseini's other book A Thousand Splendid Suns). Kite Runner starts with a dysfunctional family (a son who does not feel loved by his single father) and a dysfunctional "friendship" between boys due to their cultural cast system. A physical birth disfigurement, cowardice, cover up lies, and betrayal are touched on. War atrocities are covered including more homosexual rape, gun violence, power struggles, and the flight of refugees. This novel also ties in cancer, infertility, adultery, a bastard child, deception, more violence including a public stoning, innocent victims killed in broad daylight, child servitude and attempted suicide. Many reviews mention the main character's courage to seek redemption but I found the circumstances overly dramatized and any meaningful aspects of redemption washed out.

Kite Runner ends with a glimmer of hope for better times but after the countless events of trauma, violence and brutality, emotionally and physically throughout the book, the hopeful ending only makes a dull thud against the depressing, dark, adult topics depicted and graphically described throughout the book.

I fail to see why Kite Runner is being selected over countless other great pieces of literature. I do not feel this book is a necessary read to understanding the complex differences of Afghanistan's culture nor it's history. I am not opposed to high school students being exposed to different cultures or adult topics but of the literary options that are available, I do not feel Kite Runner offers educational value that exceeds the depressing nature of this book and the descriptive imagery of countless depressing adult topics that have happened in Afghanistan and are probably still happening in Afghanistan. I prefer my 15 year old to learn about Afghanistan in a neutral, historical style rather than taking an emotional ride with fictional characters.

It astounds me that over 4,000 readers rate this book with 5 stars. My question to them is how many of them would choose this book over another book for their high school students.
Meer lezen
120 mensen vonden dit nuttig
Vertaal recensie in het Nederlands

LovetoRead
5,0 van 5 sterren like me, have not read a book like it
3 december 2017 - Gepubliceerd op Amazon.com
Geverifieerde aankoop
There are so many ways that this book has touched me; it's difficult to find a place to begin.
I read this book after reading "A Thousand Splendid Suns" because I was beginning to really become aware of how many of our fellow brothers and sisters in other places in the world have the same desires that we do in the United States: to raise our children with a sense of morality, the determination to make more of oneself, and the endurance to keep going in horrific times and situations.
The narrator of this story is so breathtakingly honest that I feel that his conscience is only open to me. This story allows me to recognize that more than likely every human who has ever walked this earths has had moments of deep regret, and that if we could, we would go back and redo as we examine how life could have been different if other choices were made.
Reading this book has made this far away place seem so much closer - and its people much more understandable to me. It's an emotional read but a must-read for all who, like me, have not read a book like it.
Meer lezen
48 mensen vonden dit nuttig
Vertaal recensie in het Nederlands

Ronald S. Everett
5,0 van 5 sterren Brutal But a Great Read
2 juli 2016 - Gepubliceerd op Amazon.com
Geverifieerde aankoop
My 16 year old daughter was assigned this book to read in school. I often read my high school aged children's literature assignments but rarely have I been so riveted by one. This story is not for the faint of heart. It's down right brutal at times and the language and subject matter are such that adults should think carefully before allowing their younger teens to read. But for older and more mature teens, there are important lessons to be learned. And for a born and bred American, it's refreshing to get a middle eastern perspective on the world that is honest and thoughtful. I don't know if it's accurate to say I enjoyed reading this book but I was certainly enriched by the experience.
Meer lezen
40 mensen vonden dit nuttig
Vertaal recensie in het Nederlands

Amazon Customer
5,0 van 5 sterren I was very intrigued and satisfied as it was a very good read
17 april 2017 - Gepubliceerd op Amazon.com
Geverifieerde aankoop
When I picked this book up, I was very intrigued and satisfied as it was a very good read. The Kite Runner by Khaled Hosseini details a life story of a young boy, Amir who grows up looking for redemption as a result of his betrayal to his half-brother Hassan. Throughout the novel, Hosseini delves into the mind of Amir who, in the beginning of the novel, is a young boy living with his father and best friend/half brother in Kabul, Afghanistan. As a loyal friend, Hassan, despite being a Hazara, always defends Amir and himself against the pashtun boys for being friends despite Amir and Hassan’s difference in social stature. Soon, they split apart after Amir betrays Hassan. Feeling the consequences of his cowardice, Amir sets out to find redemption for his inaction as he goes to save Hassan’s son from the Taliban after Hassan passes.
Throughout the novel, Hosseini recounts the story through the first person mind of Amir whose guilt-driven consciousness drives the plot. Hosseini weaves the idea that redemption is important because sin is enduring throughout the story. He explains that Amir seeks to help Sohrab, Hassan’s son, as he realizes that he has been “peeking into that deserted alley for the last twenty-six years.” It becomes apparent that his cowardice and betrayal towards Hassan has plagued his consciousness with guilt. Without relief, he cannot live a normal life that he had tried to build in the United States.
The title of the book also reveals an important aspect of the plot as the kite fighting tournaments become essential to understanding the underlying meaning of the story. Kite fighting in the beginning of the novel represents the distinct dichotomy that was occurring at that in Afghanistan between the Pashtuns and the Hazaras, but it also represents the strong bond between the half brothers. In the end, the kite fighting represents the promising future that was ahead of Sohrab and Amir. Hosseini reveals that Amir had “looked down at Sohrab. One corner of his mouth curled up just so. A smile.” Although, he has sinned in the beginning, Amir finally finds his redemption and relief within Sohrab.
Overall, this book was very captivating as it keeps readers on their toes throughout the entire story. One can feel a sort of connection with the narrator further aiding the reader the importance of redemption. I would give this book five stars.
Meer lezen
22 mensen vonden dit nuttig
Vertaal recensie in het Nederlands
Ga naar Amazon.com om alle 6.148 recensies te bekijken 4,7 van 5 sterren
Terug naar boven
Over ons
Verkoop bij ons
We helpen je graag
© 1996-2020, Amazon.com, Inc. en dochterondernemingen