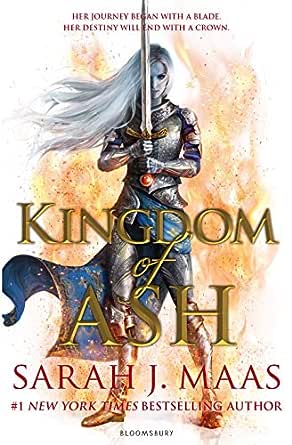 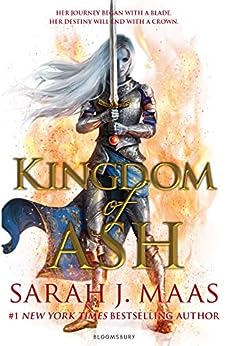 "Fans will delight in this gorgeous edition. . . . Action-packed and full of insight into Celaena's character. . . . What a ride!" --Booklist on The Assassin's Blade

"A thrilling read." --Publisher's Weekly on Throne of Glass

"A must-read for lovers of epic fantasy and fairy tales." --USA Today on Throne of Glass

"Fans of Tamora Pierce and George R.R. Martin, pick up this book!" --RT Book Reviews on Throne of Glass

"An epic fantasy readers will immerse themselves in and never want to leave." --Kirkus Reviews on Crown of Midnight

"A thrill ride of epic fantasy proportions." --USA Today on Crown of Midnight

"Maas shines as a brilliant storyteller. . . . The most exhilarating installment yet." --RT Book Reviews on Heir of Fire

"Impossible to put down." --Kirkus Reviews on Queen of Shadows

"Beautifully written prose and brilliantly crafted plots come together in this entry of the awe-inspiring fantasy series that will leave readers anticipating the next volume." --SLJ on Queen of Shadows

"Sarah J. Maas turns a corner from sprawling epic to thrilling psychological fantasy. . . . A worthy new chapter in the Throne of Glass saga" --HuffPost on Tower of Dawn

Aelin Galathynius's journey from slave to assassin to queen reaches its heart-rending finale as war erupts across her world …
She has risked everything to save her people – but at a tremendous cost. Locked in an iron coffin by the Queen of the Fae, Aelin must draw upon her fiery will to endure the months of torture inflicted upon her. The knowledge that yielding to Maeve will doom those she loves keeps her from breaking, but her resolve is unravelling with each passing day…
With Aelin imprisoned, Aedion and Lysandra are the last line of defence keeping Terrasen from utter destruction. But even the many allies they've gathered to battle Erawan's hordes might not be enough to save the kingdom. Scattered throughout the continent and racing against time, Chaol, Manon, and Dorian must forge their own paths to meet their destinies. And across the sea Rowan hunts to find his captured wife and queen – before she is lost to him.
Some bonds will deepen and others be severed forever, but as the threads of fate weave together at last, all must fight if they are to find salvation – and a better world.

Angela Dahlstrom
3,0 van 5 sterren Mostly love
27 oktober 2018 - Gepubliceerd op Amazon.com
Geverifieerde aankoop
Let me start by saying how much I've loved this series, it's my favorite story/world of characters! I have great appreciation and respect for SJM, and have loved this journey!

I mostly loved this conclusion, she tied up the loose ends, but it felt drawn out (nearly 1000 pages) to a slightly anti-climactic ending. There were some long unnecessary parts, and a LOT of repeating things (the inner monologues of certain characters..to whatever end, walked through the darkness together etc...).

*SPOILERS
- I don't feel that Lysandra would've lasted that long as Aelin. Rowan scented her as a shifter almost the moment they met, yet she's with an army of fae who can't tell a shifter's scent? Oh, and Aedion was unforgivably cruel to her.
-I think Rowan could've helped a bit while Elide was saving Lorcan. His wind would've practically thrown them but he did nothing, then had enough power to protect an entire city from scorching steam.
-Gavriel's sacrifice was unnecessary.
-Aelin bringing a whole other army through portals at the last minute was far fetched.
-why was it easier to beat Erawan and Maeve when 3 princes nearly killed them all previously.

I still loved the book and nearly bawled at the sacrifice of the 13 😭. I love these characters, but would've liked a better epilogue that maybe showed where the years take them. There needs to be another book!
Meer lezen
55 mensen vonden dit nuttig
Vertaal recensie in het Nederlands

Jacob Sindic
5,0 van 5 sterren A fitting end to a fantastic series
24 oktober 2018 - Gepubliceerd op Amazon.com
Geverifieerde aankoop
I'm writing this at nearly a quarter past 1 AM, having just finished the book in one long, unbroken sitting and have more feels than I can process anytime soon. But I wanted to get all this down while it was still fresh in my mind, and in line with the overall impression the series has left me with.

As someone who aspires to be an author, I know the struggle to juggle characters' development, flow of plot and organic, unhurried development of the world and its lore is a tumultuous one, regardless of what genre you write in. I can also safely say that it is a juggling act Sarah J. Maas has in her own ways performed to beautiful and lasting results.

Young adult series are often overlooked or brushed off as being trope fodder for teenagers, despite some of the most acclaimed and memorable amongst them like Harry Potter, Percy Jackson and A Series of Unfortunate Events gaining world-wide renown and even enjoying some of the better (and some of the not so great) efforts of cinematic adaptation. Part of what makes them and others like them some of the best and received to such popularity stems from not treating their target audience as young or naive, not sugarcoating or omitting the darker or more mature aspects of life and the worlds the stories create for themselves. The Throne of Glass series shares this trait, but expands on it in tandem with the way Maas works to create her characters and let them grow as much as the world around them unfolds and develops with the story in turn.

While the first book did have some growing pains to it, from the second onward it was clear Maas knew what kind of story she wanted to tell and wasn't afraid of pouring as much humanity into her characters or lack thereof to craft it as best she could, and in a world packed with enough organic detail to see it as the living, breathing thing that it was. Aelin Galathynius is as much a strong, driven and cunning character as she is human, emotional and vulnerable, and falls into exactly none of the numerous tropes and literary pitfalls that can plague many female protagonists, especially in fantasy fiction. And she isn't the only one, Maas shows no qualms about filling her world with female powerhouses that could all viably headline their own sagas with ease, and even then she doesn't short the male characters at all in terms of their own intrigue and development in the short or longer term plot.

This series has garnered a major following in the years since its initial release for good reason. While the romance angle is indeed a central aspect, the medieval era political struggles, fantasy action and magical combat have always been strong supporting aspects throughout each book as well. The characters feel real and their struggles genuine, the relationships they have with eachother reflecting bonds many readers can empathize with on many different levels. For me, it was a fantastic example of a series that took itself seriously but with enough awareness of its genre to let the characters be people and have fun with who they were instead of just being swallowed by their roles and the drama of the plots' darker aspects.

These characters felt real, their stories and struggles felt like a proper series of adventures and the way they suffered and grew as people throughout the span of the series felt memorable and significant. This ending installment itself is a fitting and heartfelt example of that in its entirety, and without going into spoilers, any happy endings involved are as bittersweet as they are heartwarming for many of the characters in as many ways.

I will miss this world, will miss these characters and can still easily see the potential for so much more that could lie ahead for them. Part of me hopes Maas will return to them sometime in the future, but even if that isn't the case this last installment stands as a testament to the series as a whole and a fitting conclusion to the adventure Maas began years ago with the story of a smart-tongued young assassin girl coming into a royal past she'd thought left far behind her. As an avid fantasy fiction fan, I heartily recommend this series to any and all comers, and can say that making it to this ending will be far from disappointing.
Meer lezen
39 mensen vonden dit nuttig
Vertaal recensie in het Nederlands

Nikki Galloway
5,0 van 5 sterren ❤❤❤
26 oktober 2018 - Gepubliceerd op Amazon.com
Geverifieerde aankoop
5 stars doesnt seem like enough. Doesnt do this wonderful, amazing book justice. The emotions I felt reading this book, man....it was anger, frustration, sadness, joy, amazement, shock, and love. Im truly sad that this series has ended, but I could not be happier about the ending. Sarah J Maas did an amazing job tying up every loose end we could think of. This is, and forever will be, one of my all time favorite series. Thank you for giving us this chance to experience this world!
Meer lezen
34 mensen vonden dit nuttig
Vertaal recensie in het Nederlands
Ga naar Amazon.com om alle 1.940 recensies te bekijken 4,8 van 5 sterren
Terug naar boven
Over ons
Verkoop bij ons
We helpen je graag
© 1996-2020, Amazon.com, Inc. en dochterondernemingen