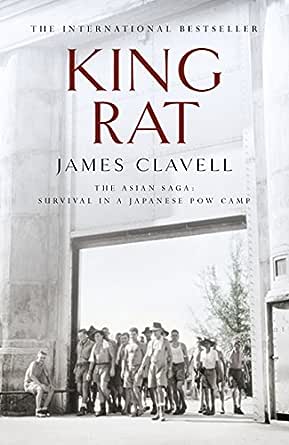 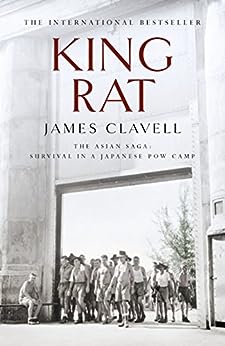 Set in Changi, the most notorious prisoner of war camp in Asia, King Rat is an heroic story of survival told by a master story-teller who lived through those years as a young soldier. Only one man in fifteen had the strength, the luck, and the cleverness simply to survive Changi. And then there was King.
click to open popover

Chip Hunter
5,0 van 5 sterren A first-hand look at the human spirit under deplorable conditions
2 november 2018 - Gepubliceerd op Amazon.com
Geverifieerde aankoop
The first-published but chronologically-fourth book of the Asian Saga, KING RAT follows a group of allied POWs in a Japanese internment camp in Singapore during World War II. The story revolves around “The King”, an American prisoner who hustles his way into a life of relative comfort amidst scarcity, sickness, and desperation. The descriptions of life in the crowded and under-provided POW camp are realistic and horrifying, but the real message here is about the psychological impacts of abuse and confinement on the thousands of young men locked up in Changi. Life in a POW camp is terrifyingly boring but constantly stressful. The men are on edge all the time but have nothing to do. While there is very little action per-se in KING RAT, there is an ever-present threat of violence that keeps the story on a knife edge.

Still, even under the direst circumstances, we see light-heartedness, laughter, enjoyment, friendship, competition, and jealously. Hierarchies emerge and a natural order takes over. The ability of humans to adapt to their conditions and retain their sense of self is seen here from Clavell’s first-hand perspective. The fact that KING RAT was largely based on Clavell’s own experiences as a POW during World War II in the very prison he centers his tale on gives the novel gravitas and a great deal of authenticity.

One major plot line that I didn’t expect but was important for the book focused on transgender acceptance and psychology. A RAF pilot who plays female characters in performances ends up fully embracing the life of a woman. The hesitancy of Sean’s friends to accept Sean-the-woman, the psychology underlying Sean’s transition, and wanted and unwanted attention from the sexually-starved male prisoners are all examined, probably less carefully than would be acceptable by a modern author of Clavell’s stature.

The book ends with the prisoners being released and their realization that they have been changed forever. Many are unsure of their place in the world after surviving Changi, especially after seeing themselves in the eyes of the healthy soldiers sent to free them. The King’s time on top has come to an end and his reaction is powerful.

The exploration of human interactions and ethical nuance while under psychological and physical strain, make KING RAT Clavell’s most important novel content-wise. I did not enjoy it as much as I did SHOGUN or TAI PAN, two of my favorite novels, which had better pacing, characters, and especially settings, but this one is certainly worth reading and thinking about.

Draquul
5,0 van 5 sterren A Classic!
19 juli 2019 - Gepubliceerd op Amazon.com
Geverifieerde aankoop
This is, and has been for 30 years, one of my all time favorite reads. Shogun, probably Clavell's best known book, is wonderful too but it's nearly 1,300 pages. This masterpiece is short and sweet and it lays to the bone the pain and suffering endured by the poor souls unlucky enough to find themselves confined in Changi prison camp and, even more horrific, Utram Road Prison..a place men are sent.. never to return. It has to be one of the best WWII books about the Allied soldiers captured by the Japanese. He doesn't pull any punches and yet he manages to find humor in among the horror these men endured. The author, himself a POW held by the Japanese, claims that while the settings are very real places, the characters and the story told are fictional; but it's difficult not to sense his own experiences coming through as he develops the characters inside these pages. It's an impossible book to put down once you start. It includes an unlikely buddy story and is full of subtle, and sometimes not so subtle, social commentary as well. The author's able to put you inside each man's mind and lets you view this nightmare world they're forced to live in through their very individual points of view. It's a cops and robbers story too and it's a wonderful example of capitalism at it's finest and at it's worse. It's about betrayal, devotion, loyalty, love and friendship. For such a small book, it packs an amazingly large punch!
While it is not for the faint of heart, I still highly recommend it.
Meer lezen
3 mensen vonden dit nuttig
Vertaal recensie in het Nederlands

Hawks Gull
5,0 van 5 sterren Class and survival in wartime
19 mei 2018 - Gepubliceerd op Amazon.com
Geverifieerde aankoop
A story of survival in the WWII prisoner-of-war camp at Changi, Singapore. Like a rat, an American corporal known as the King uses his wits to survive and adapt in the prison camp. He has had a rough life and after the war will probably be sent to military prison for his activities in the camp. His life at Changi is probably the most successful period of his existence. At one point he devises a successful scheme to breed rats and to sell their
meat to the officers as that of the small mammal called a mouse-deer or Rusa tikus which is considered a delicacy. It is about the size of a rat. Although there is a lot of resentment toward the King, his machinations keep the other prisoners alive and striving. As news of the war's end reaches the camp, the King's incredible network of power crumbles and his future looks grim. The King is based on Clavell's experience as a prisoner of war.
Meer lezen
4 mensen vonden dit nuttig
Vertaal recensie in het Nederlands

Ben
5,0 van 5 sterren Shortest in the series (the fourth of five works), still a terrific read
4 oktober 2014 - Gepubliceerd op Amazon.com
Geverifieerde aankoop
This is the fourth of five excellent volumes in Clavell's asian masterworks. It reads well, connects well to the other volumes, and is a massive read compared to most works of fiction. This book is the shortest of the set, quite short in fact in comparison, but still about normal book length.

The Kindle version I received contained extra sections that were edited out of the original work, and frankly, I can see why. After reading a bit of the extra content, and knowing how the book was originally structured, I just skipped the new stuff (frankly, I think the original editor was right: it doesn't fit or flow well.) You should read the introduction, which explains the rationale for including this other material.

Having said that, still, highly recommended both on its own and as the fourth in the whole series. Be sure to read the books in order for the most enjoyment; they're connected although quite distant in time from one another, and by reading them in order, the history of the current book you're reading will be deeper and your comprehension of what is going on, and why, will be much better: