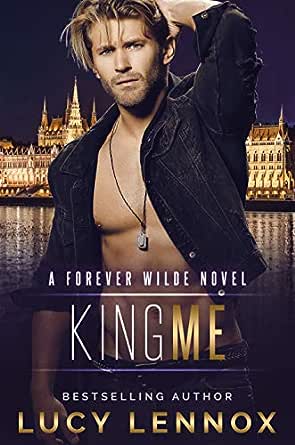 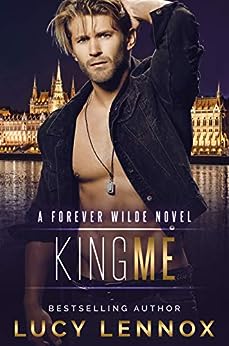 Falcon: Three years ago I arrived at the scene of an art heist to find Kingston Wilde tied to a radiator, claiming to be an innocent bystander in the wrong place at the wrong time. It was only later I learned he was actually the elusive art thief I’d been tracking for years. And I was the one who’d let him sweet-talk his way out of my grasp. Ever since, I’ve made it my mission to get my hands on him again, and this time I don’t plan on letting go.

Unfortunately, fate has other plans. A priceless artifact has gone missing, and King is the only one who can help recover it. I thought nothing could be worse than being forced to work with the egotistical SOB, but I was wrong. Falling for the charming art thief in the middle of an operation is way, way worse.


King: The key to being a good art thief is knowing when to call it quits. After one close call too many, I decide that time is now and head home to Hobie, Texas, intending to hang up my lock picks for good. Unfortunately, the FBI has other plans. Agent Dirk Falcon approaches me with an offer I can’t refuse: full immunity for my past crimes in exchange for helping him with one last job.


The catch? The job involves stealing from the very man who taught me everything I know. The same man who double-crossed me years ago. Pulling this off means trusting Falcon and his team, but how do I trust the sexy agent when he’s staked his career on taking me down?

King Me is the seventh book in the Forever Wilde series but you do not have to have read any of the others to enjoy it.
click to open popover

W. J. Kibler
3,0 van 5 sterren I've read better from this author.
20 juli 2019 - Gepubliceerd op Amazon.com
Geverifieerde aankoop
I know I'm gonna get hate for not giving this book more stars but I was SOOOOOO hyped to read it and felt let down. First, let me say that I love this series and all the characters that Ms. Lennox creates. But I found this premise - while intriguing - not fitting well with the character of King. We never knew much about King from previous stories - he was always a bit mysterious. But at only 28 years old, I found it hard to accept that he was a master art forger/thief. The training to become an artist of such high caliber would take years and years to master. If King were, perhaps, 38 years old I might have found it easier to accept. The same goes for F.B.I. Agent Falcon - he was too young at 38 to have the years of the necessary training to be leading a world-wide task force to hunt down art thieves. He supposedly was this rugged, tough "daddy" type, but at 38 years old how much of a "daddy" can you be? Again add 10 years to his age and I wouldn't have a complaint. There were also numerable incorrect usages of words (has instead of have, for instance), wrong tenses of words (present instead of past-tense) and missing connective words (like "to" and "the"). If a book is going to be hyped as much as this book has been, I would expect perfect proofreading. Now, Ms. Lennox's die-hard fans won't give a hoot about what I have said here, but I am giving an honest review.
Meer lezen
36 mensen vonden dit nuttig
Vertaal recensie in het Nederlands

Avid Reader 1
5,0 van 5 sterren Another winner!
17 juli 2019 - Gepubliceerd op Amazon.com
Geverifieerde aankoop
I didn’t know how to react when I heard the premise for King Me. A Wilde that’s a criminal? How can this be? This goes against everything that I believe the Wildes stand for! Plus, I have never enjoyed a main character being a criminal, especially in a romance. I find it hard to trust the character when they live their life being deceitful. I was wary, but I have learned to trust this author. She hasn’t failed me yet.
Kingston Wilde is a lovely, complicated character. His time spent on the wrong side of the law damaged him in very personal ways, but he ended up stronger in the end. His sense of right and wrong no longer fits into perfect little boxes but hang messily over the edges in a confusing, colorful array. He helped me and Falcon to see that laws and criminality are sometimes not as cut and dried as we would have it. He has sought his “specialness” most of his life, but didn’t realize that the ones who care about him love his as he is, not as he wants to be.
I enjoyed the extra time with the Wildes, especially the chance to get to know MJ better. There is always a laugh or a hug to be had from that crew.
Dirk Falcon (bow chicka wow wow) is a strong character that I had to grow to love. He is rigid and grumpy, not to excess, but enough to resist the draw of King for a while. His adherence to the letter of the law put him and King at odds but their feelings for each other won out in the end. As the book progressed, his character became more defined even as his beliefs shifted to include King and his outlooks into his new idea of what life means to him.
Both characters are sexy and confident in their physical prowess, one being more dominant and the other more submissive. But there is no BDSM in this book. I just want to make that clear. There is sexy, spicy one on one time with these guys that will make your eyeballs sweat and heart race. Mmmm.
The underlying story, the caper/heist, is interesting and well written. I was on the edge of my seat and biting my nails through those action packed, suspenseful pages. The fast pace kept me engaged and the planning and lead up to the job was just as interesting as the job itself.
I enjoyed meeting Falcon’s crew. They are appealing characters who play off the main characters very well but retain their own unique personalities. Mouse is my favorite.
Start to finish, this is a good book. It has something for everyone. I look forward to more from this author.
Meer lezen
4 mensen vonden dit nuttig
Vertaal recensie in het Nederlands

Rachel R.
5,0 van 5 sterren AMAZING
16 juli 2019 - Gepubliceerd op Amazon.com
Geverifieerde aankoop
AMAZING!!!!! Each new book keeps getting better and better. King and Falcon are the perfect enemies to lovers read! King has been the dark and mysterious Wilde for a few books now so to finally see all his deep dark secrets revealed was brilliant! King might act like the confident comedian but it hides some deep scars in love that have changed him for the worse. His personality, skills and art knowledge was the perfect mix to my nerdy heart. Falcon is the older and wiser grumpy agent that has to swallow his pride to ask the one person he wants to put away for help. A take control boss who isn't going to let anything stand in his way from getting what he wants. He sees something behind King's eyes even if he doesn't want to admit it yet. These two together is full-on consuming chemistry that will set the pages on fire. From one hot hate-kiss to the next, sex turns to deeper feelings that they both struggle with. How can a cop trust a thief? How can a thief believe a cop is telling him everything? With each scene their walls come down and all you want is more. An action filled heist plot with mystery, suspense with love weaved in was fantastic, each side character I fell in love with and hope we see more of Ziv, Mouse and Linney in the future. Funny, clever and I can't wait for the next. I voluntarily reviewed an 'Advance Author’s Copy' of this book.
Meer lezen
3 mensen vonden dit nuttig
Vertaal recensie in het Nederlands

Some of the Wilde family make an appearance but this one is set apart geographically, which is also a great choice.
Meer lezen
5 mensen vonden dit nuttig
Vertaal recensie in het Nederlands

Insert interesting name
5,0 van 5 sterren Interesting and fun, if you ignore....
7 augustus 2019 - Gepubliceerd op Amazon.com
Geverifieerde aankoop
Overall a 4. Fun, creative, interesting. I’m a big Lucy fan, and the dialogue and banter are good, as always in her books.

But...there are SO many inconsistencies and things that simply didn’t make sense that it became seriously distracting and annoying.
Is the mission sanctioned? It depends on which paragraph you read. There are many others. The bad guy isn’t very smart, but later he’s referred to as one of the “most prolific art thieves.” You can’t be a successful art thief over and over again if you’re not smart.