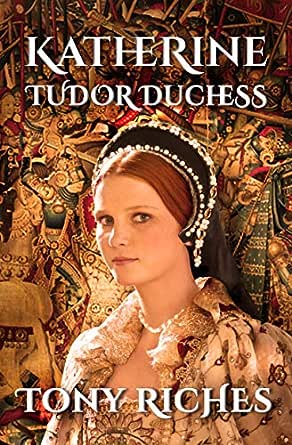 She stands up for what she believes in...
but such courage has consequences

Attractive, wealthy and influential, Katherine Willoughby is one of the most unusual ladies of the Tudor court. A favourite of King Henry VIII, Katherine knows all his six wives, his daughters Mary and Elizabeth, and his son Edward, as well as being related by marriage to Lady Jane Grey.

When her father dies, Katherine becomes the ward of Tudor knight, Sir Charles Brandon. Her Spanish mother, Maria de Salinas, is Queen Catherine of Aragon’s lady in waiting, so it is a challenging time for them all when King Henry marries the enigmatic Anne Boleyn.

Following Anne’s dramatic downfall, Katherine marries Charles Brandon, and becomes Duchess of Suffolk at the age of fourteen. After the short reign of young Catherine Howard, and the tragic death of Jane Seymour, Katherine and Brandon are chosen to welcome Anna of Cleves as she arrives in England.

When the royal marriage is annulled, Katherine’s good friend, Catherine Parr becomes the king’s sixth wife, and they work to promote religious reform. Katherine’s young sons are tutored with the future king, Prince Edward, but when Edward dies his Catholic sister Mary is crowned queen. Katherine’s Protestant faith puts her family in great danger - from which there seems no escape.

Katherine’s remarkable true story continues the epic tale of the rise of the Tudors, which began with the best-selling Tudor trilogy and concludes with the reign of Queen Elizabeth I.


"The characters are wonderfully drawn. From king to queen to servant, each were brought vividly to life." Discovering Diamonds Review

‘Katherine the Duchess’ is a novel which gripped me from the start and I felt great empathy for this strong but extremely wise lady who trod a silken threaded path through life ~ joy ~ fortune ~ but great danger. Highly Recommended. Diana Jackson

"Tony Riches, delivers a vividly descriptive, interesting, and well-written read here with characters and a setting that totally captivated and intrigued me. I was totally taken and fascinated with historically political drama that unfolds within the Tudor Court.." Verified Amazon Reviewer

"Katherine Willoughby finally gets her time to shine in Tony Riches’ conclusion to his Tudor trilogy." Review at Adventures of a Tudor Nerd
click to open popover

Lisa M
5,0 van 5 sterren If you enjoy Tudor historical fiction you’ll love this book.
24 november 2019 - Gepubliceerd op Amazon.com
Geverifieerde aankoop
Fantastic book! Grabs your interest right from the start and it’s one of those can’t put down as you want to see what’s happens next. You can tell a lot of research went into this book and extremely well written
Meer lezen
Een iemand vond dit nuttig
Vertaal recensie in het Nederlands

Nurse_bookie
5,0 van 5 sterren amazing tudor story
2 december 2019 - Gepubliceerd op Amazon.com
This the third book of the Brandon Tudor stories from Tony Riches. Katherine Willoughby is a very influential lady in the Tudor court since she is close with all f King Henry VIII wives and King Henry VIII himself as his children Mary, Elizabeth and Edward. So close was Katherine with Henry VIII there were talks that she might have been the seventh wife. Unfortunately her story somewhat ends at the reign of Queen Elizabeth I since she was not invited to her court and most likely due to her vocal opposition to the Catholic religion that Elizabeth I practiced.

The book goes through March 1528 through March 1557. When Katherine’s father died, she becomes the ward of Tudor knight, Sir Charles Brandon, King Henry VIII’s brother-in-law. Katherine marries Charles Brandon, and becomes Duchess of Suffolk at the age of fourteen.
Tony Riches delivers a rich story about a very interesting time in history that is amazingly well-written and quite the intriguing read of what happens in court. The stories were fascinating and completely drew me in.

The book was well written, easy to follow and kept me turning those pages. Katherine Tudor Duchess by Tony Riches is a beautifully written historical fiction novel that completed the trilogy on the Tudors. Riches successfully wrote an amazing historical book with precise accuracy and an intriguing read.

Kindle Customer
5,0 van 5 sterren Another so her for Tony
8 oktober 2019 - Gepubliceerd op Amazon.com
Having read so many Tudor era books over the years it was nice to read about a character I knew so little about. I enjoyed reading more about Katherine and had no idea she had such an interesting life.

I'm not usually a fan of stories about the religious war but found this one to be entertaining and not too serious. I've read most of the books written by Tony and have enjoyed them all.

David Fitz-Gerald
5,0 van 5 sterren Will Her Head Remain on Her Shoulders?
2 december 2019 - Gepubliceerd op Amazon.com
Though I haven’t studied this period in history for a very long time, I found myself visiting London this summer. At the Tower of London, the Yeoman Warder spoke fantastically about the horrors of the beheadings that occurred there. I might have benefitted from reading this book before going on that tour. On the other hand, reading it subsequently is kind of like a souvenir.

From the very beginning, the question on my mind was whether Katherine’s head would remain on her shoulders. The pages and chapters flew by and I couldn’t stop until I got to the end. Will there be a happy ending? A tragic ending? I won’t spoil your fun by disclosing the answers to those questions.

This book covers the period from 1528 through 1557. We meet Katherine at the age of 9-years old and follow her path for the next thirty years. It’s a book about loss and it’s a book about change. At the very beginning, Katherine’s mother must give up her daughter so that she can become a ward of the Duke of Suffolk. During those days people didn’t live very long to begin with. It didn’t help that doctors tried to cure people by helping them bleed to death. So, Katherine doesn’t get to stay put very long, making her life story enormously fascinating.

It was a tumultuous period in history, to say the least. Katherine wasn’t just a witness to the reign of the notorious King Henry the VIII, she knew all the famed wives and children of the king. Katherine’s commitment to her faith, and determination to help bring about reforms make her a complex and compelling character in her own right. Her dedication also placed her in great danger, throughout the book. The author never strayed from making this book her story.

This is an epic work that includes a huge volume of facts and characters. Long before the ending of the book, I gave up trying to keep track of everyone who was beheaded, imprisoned, or burned at the stake. I would have preferred a higher ratio of feelings to facts. The dirty deeds would have seemed even more excruciating if I had come to know the victims better. This book is action-packed, high stakes, palace intrigue from the very beginning, all the way to its finish.

This book is part of a series. I have not read the other books in the series. This book was complete unto itself, and I didn’t feel lost as a result of not reading the other books first. So I am happy to recommend it on a stand-alone basis.