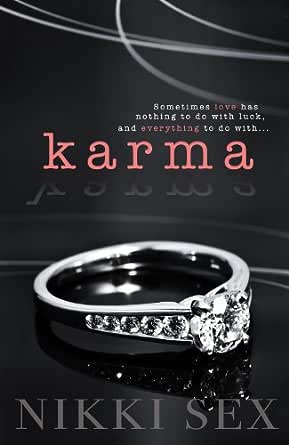 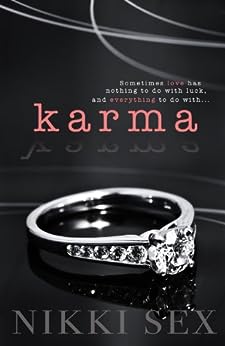 Marcy Paget worked full-time putting her husband through University. When he finally became a success, he dumped her for a trophy wife more than ten years younger, leaving Marcy to raise their four year old daughter on her own.

Even though Marcy knows she is better off alone than with a cheating husband who doesn't love her, she is still struggling to make ends meet.

When an ethical dilemma presents itself she makes a choice - never realizing the incredible karmic chain of events that will follow her decision. . .

fridayschild
5,0 van 5 sterren A lovely Surprise
1 oktober 2013 - Gepubliceerd op Amazon.com
Geverifieerde aankoop
As a person of Indian origin, whose entire spiritual belief revolves around Karma, I was immediately attracted to the title.

But since it cost so little, I decided to give it a go and I am happy that all my assumptions were completely wrong.

Oh, don't get me wrong, there is sex and it's pretty hot too, but the overwhelming feeling that I got was that the MCs were not just getting off, but really loving the soul of the person that they were with and were not in it just for the physical act. There were a couple of ugly scenes with the ex-husband, but that just felt like angry masturbation to me, as the women he was with were not actual persons, just receptacles for him. So that did not take away any of the good things that I felt about this lovely, lovely story.

I cannot describe the feeling that I had, when I was reading the part of Andre being intimate with a client he was working with, every action and every word was so unbelievably poignant.

Mike is just about the best damn male lead that I have read of recently. Apart from his apparent good looks, which you actually begin to forget about in a bit, he's just so likeable, which is really important to me, he's also very intuitive and just so very perfect, with all his imperfections. The scene where he massages Marcy's feet during her PMS and his calendar tracking her cycle, reminded so much of my own man º.

Katie was a wonderfully mature kid, understanding what was happening around her and her acceptance of life and her ability to move beyond the hands that she was dealt with, made me cheer for her.

Marcy. Her development from a stressed insecure single mom, to a confident and trusting woman in love was simply fantastic.

Oh, I forgot to mention Brent's fate. I loved it!

As you can see, my review clearly indicates my satisfaction with the book and I am looking to buy more from this author. Definitely would recommend.

This is a story with characters you feel invested in. Also characters from this story are found in others so there is a connection. I like the base of the story and how the title really was apart of the story. I was over joyed by the connections even if they may be unrealistic. I wanted to believe so that is all that matters.
I loved both lead characters. I liked most except the ex-husband. He made a nice villain. I even liked the wife he married after.

You will leave this story with a clear resolution. There is a HEA ending. No cliffhangers. There is even an epilogue to quench you need to what happened after. There is plenty of sex but it fits the story. It even played out as an interesting lesson when the MFC was learning. It felt like you left with a bit of an education. Ig you are not into the sex then skip it and the story carries itself without it.
Meer lezen
17 mensen vonden dit nuttig
Vertaal recensie in het Nederlands

ELJ
1,0 van 5 sterren What's the point?
21 april 2019 - Gepubliceerd op Amazon.com
Geverifieerde aankoop
I'm only 23% of the way through this book and I wish I'd read the reviews before I started. Would have saved me some time as I always read the 1 star and then the 3 star reviews. I rarely read the 5 star reviews because nothing really meets that standard so I already know those reviews can't be trusted.

This store seems to have zero point. I have gotten to any sex scenes yet but I already know they can't save this story. I'm not a fan of weak women and Marcy is weak. She's also kind of dumb. She's a total push-over and noatter what she thinks, he dad was horrible to her.

I understand karma but an entire book written to show what happens to you, how your karma comes to fruition, is just way too obvious.

I don't know if I'll finish this book. It's also pretty poorly written. Too many words. It's like the author think "why say it in 6 words when I can use 27?"