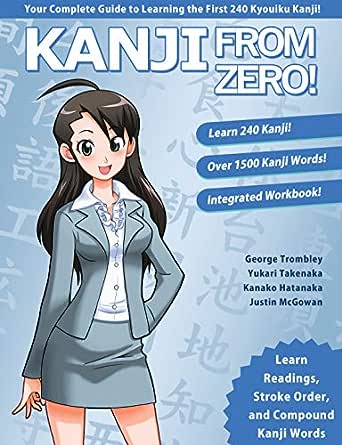 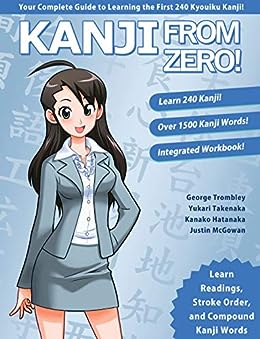 I think some things about Japanese are REALLY clicking with this book! It's like I found a key to unlock Japanese in my head. I used to be intimidated by kanji but now I know it's a lot more helpful than I originally thought!

Kanji From Zero! is perfect for current students of Japanese who already know how to read hiragana and katakana. The book isn't just another kanji reference book. Instead it's designed to teach kanji and associated culture and related words to give a connection to kanji that other books ignore.
Alle bekijken
click to open popover

Melissa M
5,0 van 5 sterren Perfect solution to learn Japanese for homeschoolers and self studiers
31 mei 2019 - Gepubliceerd op Amazon.com
Geverifieerde aankoop
My teen son was homeschooled since eighth grade. One of his main interests turned out to be languages. In his first couple years of homeschool, he attempted to learn Japanese using Rosetta Stone (he went through the full first level and most of the second), using the first Genki book and workbook, various other beginner books (as I scroll through the popular books on Japanese language in Amazon, I see we own many of the titles...), and by doing a few other things like us just going through flashcards of hiragana and katakana.

Halfway through his Junior/11th grade year (Jan 2017), he told me he felt like he learned a lot of Japanese, but said he wouldn't be able to put together even the simplest sentence - written or spoken - if he was put to the test. As with all things homeschool, there's some trial and error, and we occasionally try something that doesn't work. This was definitely one of those things. I knew he was frustrated, but not at all ready to give up.

At that point we came across Japanese From Zero! Book 1. When he started using that first workbook and discovered the hundreds of free videos the author, George Trombley, put on YouTube, I mean, this kid was transformed. He ate that book up, and book 2. By the end of that school year (June 2017) he'd gone from saying he couldn't say "How are you?" to being comfortable enough to converse with teens in Japan. In the summer he completed book 3. Senior/12th grade year (starting September 2017) he completed Japanese From Zero! 4 and Kanji From Zero! 1. He kept up with the supplemental videos from George. When George asks a question, I'm continually impressed at how my son replies correctly, without fail, before George supplies the answer.

My son is telling me to say he didn’t feel he started actually learning Japanese before he opened the first From Zero! book.

These books and the free supplemental videos are by far the best system we've found for any English speaker who wants to learn Japanese.

UPDATE MAY 2019:
My son graduated homeschool Spring 2018. He asked if he could take a placement test for Japanese at the university he was planning to attend. Recall he’d only gone through George Trombley’s Japanese From Zero! books 1-4 plus Kanji from Zero! book 1 and the free YouTube videos. From the placement test, he was put in 3rd semester Japanese. He likely tested into 4th semester, but as that class is only offered each Spring, he was happy to go into 3rd semester.

How did he do? He got straight As - a 4.0 in both 3rd and 4th semester, and he’s continuing with his Japanese studies this coming year. Each class was worth 5 credits, and for the two classes he skipped, he was given 4 credits each. So for 3rd semester he got 13 credits for his one Japanese class, and another 5 in 4th semester. Just from self studying these books in homeschool.

Steven M Jacobs
5,0 van 5 sterren The Best Book to Learn Kanji!
28 januari 2018 - Gepubliceerd op Amazon.com
Geverifieerde aankoop
Kanji From Zero is a truly great book for learning kanji. The 240 kanji it teaches are divided up into 39 lessons, each lesson covering 5-7 kanji. I really like that each lesson is not an overwhelming number of kanji, and that the kanji are taught together in logical groupings, rather than the random order a lot of other books use. For example, you learn numbers, or colors, or direction words together.

Each lesson begins by introducing the new kanji for that lesson. For each kanji you are given it's kanji number and what it means in English, the proper stroke order, how many strokes it is, how to read it, a section to practice writing it, and several words that use every reading of that kanji. This is followed by a section for kanji usage which gives a lot of detailed information on how the kanji are used. There are also several exercises including practice writing words that use the kanji, fill in the blanks, matching kanji to their meaning, matching kanji to their reading, and checking stroke order. The final part of each lesson is an answer key for that lesson's exercises.

I'm sure there's someone out there might ask "why buy this book when it only teaches 240 kanji?" The answer to that is simple. Sure you can buy other books that have 2000 kanji in them, but they will not give you even a fraction of the knowledge of each of those kanji as this book will. Sure with those books you might be able to recognize what 2000 kanji mean, but you won't be able to read or speak Japanese, so big deal. Also Kanji From Zero 1 is just the first book of what will be a 5 book series.
Meer lezen
21 mensen vonden dit nuttig
Vertaal recensie in het Nederlands

Amazon Customer
5,0 van 5 sterren I highly recommend having a small understanding of Japanese
15 augustus 2017 - Gepubliceerd op Amazon.com
Geverifieerde aankoop
So I normally don't do reviews on products, usually just the sellers but I shall make an exception. I'm currently learning through his other book series Japanese from zero and wanted to add kanji, I bought the book early since I'm still early into my learning, understanding both hirigana and katakana but needing more work on vocabulary and grammar structures I'm keeping this book for the future. I did however read it abit just because I bought and payed for it and figured why not and can tell you the in depth look at the kanji which helps you study and learn new ones. I highly recommend having a small understanding of Japanese, even though it is a book from zero and you might catch on for some of it, without understanding hirigana it would be difficult. I highly suggest purchasing and finishing Jfz 1 and Jfz 2 before jumping into the kanji book, however If you already have a decent understanding of Japanese but now want to delve into kanji this is the book for you, also Jfz (including this book) has a discord chat that you can find through there website or YouTube videos where you can chat with other learners of Japanese and staff of Jfz including the writer himself at times. But w/e you end up doing make sure to check out the books he's written for learning Japanese this is far hands down the best approach I've seen and I can't wait in the next few years to see how much it will help me
Meer lezen
11 mensen vonden dit nuttig
Vertaal recensie in het Nederlands

IAN B GIJSBERS
5,0 van 5 sterren Essential for learning Kanji
1 juni 2017 - Gepubliceerd op Amazon.com
Geverifieerde aankoop
I've messed with other Kanji learning books. This one is the truth. I love the way that you learn a Kanji, then practice new words you can write with that Kanji. And it builds from there. The Kanji you learn aren't forgotten, as the book keeps bringing back the old kanji to be involved in writing new words. I love the other "Japanese From Zero" content, and this does not disappoint.
Meer lezen
10 mensen vonden dit nuttig
Vertaal recensie in het Nederlands
Ga naar Amazon.com om alle 87 recensies te bekijken 4,6 van 5 sterren
Terug naar boven
Over ons
Verkoop bij ons
We helpen je graag
© 1996-2020, Amazon.com, Inc. en dochterondernemingen