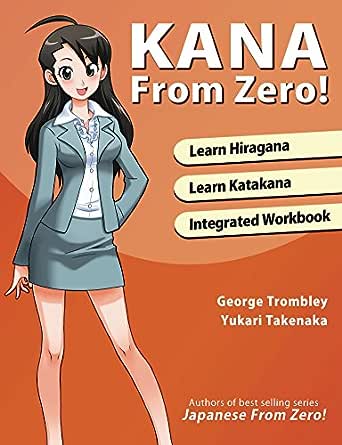 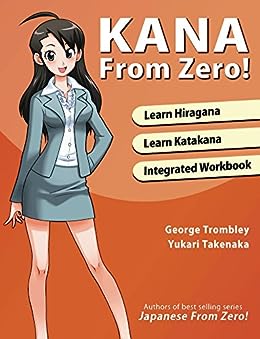 The lessons and techniques used in this book have been taught successfully for over fifteen years in classrooms throughout the world. Kana From Zero! is perfect for current students learning to read and write Japanese hiragana and katakana.

The lessons and techniques used in this book have been taught successfully for over fifteen years in classrooms throughout the world. Kana From Zero! is perfect for current students learning to read and write Japanese hiragana and katakana.
click to open popover

Mark
4,0 van 5 sterren Excellent Book to Learn Hiragana and Katakana
3 maart 2017 - Gepubliceerd op Amazon.com
Geverifieerde aankoop
When I realized I wanted to learn Japanese I bought a bunch of books and computer programs. They ended up sitting and collecting dust before I finally tried to dig into it all. I came to a conclusion very quickly, similar to one that hindered my ability to learn any other language that I've tried to learn--the books and programs go too fast for me. When chapter 1 of your book introduces 25 new characters, and expects you to have memorized them all by chapter 2, making progress seems really slow, because you now have to stop, spend time studying and recognizing them, before you can really move on, all while at the same time they are introducing vocab and grammar, and some cultural tidbits of information.

I actually started reading Japanese from Zero first, and quickly stopped since the first part of that book was how to count in Japanese. My next attempt was with Human Japanese, and I made it several chapters into it when I realized I was treating it more like a video game of quickly learning some relevant information so I could get 5 stars on the quizzes and unlock the next chapter only not retain really any of that information. So that wasn't really working for me, luckily I remembered I also bought this book and started my third attempt at beginning to learn Japanese.

So, I'm proud to say I've actually made it through the entire book. This was able to teach me hiragana and katakana to a point where I can now recognize all the characters as well as pronounce them (semi-reasonably well--ok, let's be honest, I'm probably butchering most of the words based on the pangs on my Japanese friends faces when I try to say something, but that's okay, I'll get better with more practice).

So, if you are like me, and want to approach Japanese a little slower, and give yourself a head start when you pick up your first Japanese book on grammar, I highly recommend you pick up this book, along with some flash cards, and a Campus notepad and just take it slow. Do the exercises in the workbook, practice writing the characters, and drill yourself using some flashcards. The beauty of this book is how its structured. Each chapter contains a set of characters (sometimes with dakuten), so the usual bunch of characters you need to memorize are 10 per chapter. So it actually feels like you are making progress.

Ok, so I did give this book 4 stars instead 5 because there are errors in the book. I'm lucky enough to have some Japanese friends to pester with questions, and there were several times that I sent them pics of some of the vocab examples and they were like, that's so not right, that's not how we say that (that ranged for everything from some examples of color, to the word no (ノー). There were also some printing mistakes, like when you get to lesson 9 in Hiragana, the box of characters doesn't tell you that the last character ろ is ro, or in the final chapter when learning katakana they give the example of the word fuse, which they spelled ヒュース but its actually spelled ヒューズ.

Did these mistakes really hinder my ability to learn hiragana and katakana, no, but educational books shouldn't have obvious mistakes in them like these. So I still recommend the book, and I'm looking forward to going back and picking up Japanese from Zero and starting Human Japanese from the beginning since now I have learned both syllabaries and don't have to get bogged down learning too much at once.

Kindle Customer
5,0 van 5 sterren Excellent resource for learning kana
18 januari 2018 - Gepubliceerd op Amazon.com
Geverifieerde aankoop
For reference, this book's lessons are basically the same as the kana lessons in Japanese from Zero! 1 and 2. That said, this book is great for those who would prefer learning the kana prior to diving into grammar and is especially useful for those going into other grammar learning resources.
Meer lezen
11 mensen vonden dit nuttig
Vertaal recensie in het Nederlands

Warda
5,0 van 5 sterren Excellent Book , worth every penny
19 april 2018 - Gepubliceerd op Amazon.com
Geverifieerde aankoop
Excellent book! So amazing and helpful ! teaches you both alphabets in one book and Has PLENTY of fun exercises to cement the letters into your memory because the best way to remember something is to use it frequently The writing portion is great because writing the letters our out makes it so much easier to retain them in your memory there is also an answer key at the end of each chapter where you can check your answer and it is very helpful to reinforce what you have learned. learning kana is made very fun in this book, it is quite a useful resource Thank you for your hard work
Meer lezen

Amazon Customer
5,0 van 5 sterren Excelent Foundation For Learning Japanese
4 februari 2017 - Gepubliceerd op Amazon.com
Geverifieerde aankoop
I had absolutely no self confidence about this before I started, but I decided to give learning Japanese a try. This was an excellent foundation for me, and gave the confidence to move forward with Japanese From Zero book 1. Sure, the two books overlap with many of the same vocabulary, but hey, repetitious practice only reinforces the learning. I have just finished JFZ book 1, and I'm looking forward to continuing this adventure with book 2.
I really don't have any real criticism with this book. It's very clean in it's layout, and the subject matter is easy to understand. If you were as timid as I was, start here, and don't be afraid to take it slow.
Meer lezen
6 mensen vonden dit nuttig
Vertaal recensie in het Nederlands

adam
5,0 van 5 sterren great book
2 januari 2019 - Gepubliceerd op Amazon.com
Geverifieerde aankoop
This is a great book for beginners. I just wish I had more time to practice....... Maybe instead of writing reviews for my purchases I could use this time for learning Katakana and Hiragana.