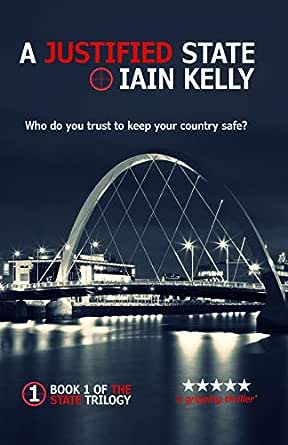 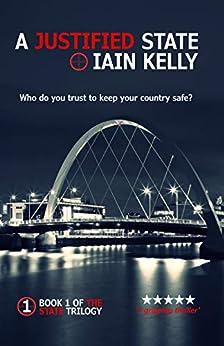 Poverty and homelessness have been eradicated, but overpopulation, an energy crisis and an ongoing war jeopardise the stability of the country.

When a local politician is assassinated, Detective Danny Samson finds himself at the centre of an investigation that threatens not only his life, but the entire future of The State.
click to open popover

Ms. Laurie J. Bell
5,0 van 5 sterren A great scifi and a great cop drama
18 september 2019 - Gepubliceerd op Amazon.com
Geverifieerde aankoop
Ah, I love a good sci fi, and I love a good murder mystery. And this is both. A cop drama set in the future… with futuristic technology and privacy concerns over a government state that knows everything about you.

What is intriguing to me is the question… how do you stage the perfect murder and get away with it in a future where every movement is tracked, public transport is recorded, cars are smart and drive themselves, and forensics is a simple matter of checking a database. Iain Banks navigates these questions with ease and creates a joyful read. With surprising action and a flawed hero, many questions are raised that leave you thinking long after the book is finished.

What if the government controlled the population ? What would that mean for ethics? for privacy? and for individual choice? What happens to the human mind when the body no longer functions properly. What is truly free about free will? What if you found out everything you believed was a lie?

And I just love a good cop novel. I’m looking forward the the second book coming out. A top read.

Eugenia Parrish
4,0 van 5 sterren Exciting page-turner
26 november 2019 - Gepubliceerd op Amazon.com
Geverifieerde aankoop
A wonderful story with exciting suspense and a heartbreaking reveal. Smashing finish and a hero I can believe in (actually more than one). A few typos as usual in ebooks but nothing that interrupts the flow of the story. A couple words that I can't decide whether it's the difference in our English or deliberate choices to give a futuristic feel. I would recommend this book to anyone and can't wait to read the next in the series.
Meer lezen
Vertaal recensie in het Nederlands

Carolyn
5,0 van 5 sterren An Eye Opener
15 november 2018 - Gepubliceerd op Amazon.com
Geverifieerde aankoop
This is a superbly well written fast paced, suspenseful mystery. A page turner as the action in the book makes you gasp and the witty one liners, brings you some smiles amidst the tension happening with the story. A story that I wanted to continue when I got to the last page for I was drawn to the characters and believe they still have a story to tell!
A fictional story but if you keep your eyes wide open you will see how it could be a foreshadowing of life to come!
Meer lezen
Vertaal recensie in het Nederlands

Jordis J. Fasheh
5,0 van 5 sterren This is not your usual detective thriller. It is much more than that. A brilliant story!
10 november 2018 - Gepubliceerd op Amazon.com
Geverifieerde aankoop
I read A Justified State in one sitting. Captivated from the first pages. It is masterfully written, a realistic future State that may only be a few generations away if the citizens continue as blind and self involved as we are today. The plot was brilliant, with characters that grabbed your attention, and incredible detail in every scene. It is most definitely Orwellian! It could be taught in High School. A page turner, exciting, and emotional, I can’t say enough. Looking forward to a sequel!
Meer lezen
Vertaal recensie in het Nederlands

CV
4,0 van 5 sterren Enjoyed this!
25 december 2018 - Gepubliceerd op Amazon.com
Geverifieerde aankoop
Author Iain Kelly has created a fascinating near future world in which police investigation, as we know it, has been rendered moot by technology. Enter Detective Danny Samson, handed the most important case of his life, a case requiring old-fashioned detective work--the kind of work that can get a man killed. I recently discovered Iain Kelly through his engaging and prolific, flash fiction. With this debut, he has proven to be equally skilled at writing novels.
Meer lezen
Vertaal recensie in het Nederlands
Ga naar Amazon.com om alle 11 recensies te bekijken 4,6 van 5 sterren
Terug naar boven
Over ons
Verkoop bij ons
We helpen je graag
© 1996-2020, Amazon.com, Inc. en dochterondernemingen