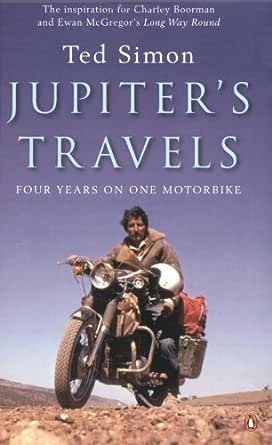 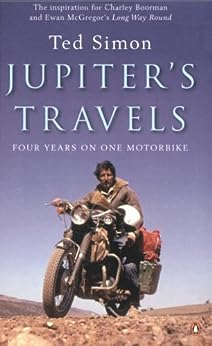 Vivid description of driving under conditions that were often ferocious.--NY Times

A compelling narrative that moves, sometimes at breakneck speed, over some of the world's most beautiful and mysterious terrain ? packed with fascinating detail, splendid characterizations, and hair-raising adventures.--Boston Globe

By all means TAKE THE PLUNGE.--Rider Magazine

The book that inspired Ewan McGregor's Long Way Round

In the late 1970s Ted Simon set off on a Triumph and rode 63,000 miles over four years through fifty-four countries in a journey that took him around the world. Through breakdowns, prison, war, revolutions, disasters and a Californian commune, he travelled into the depths of fear and reached the heights of euphoria.

He met astonishing people and was treated as a spy, a welcome stranger and even a god. For Simon the trip became a journey into his own soul, and for many others - including bikers Charley Boorman and Ewan McGrergor - it provides an inspiration they will never forget.

This classic text, which has informed a whole genre of travel writing in the thirty years since it was first published, will never be bettered for sheer adventure, passion, humour and honesty.

Brought up in England by a German mother and a Romanian father, Ted Simon found himself impelled by an insatiable desire to explore the world. It led him to abandon an early scientific career in favour of journalism, and he has worked for several newspapers and magazines on Fleet Street and elsewhere. Ted Simon is also the author of Riding Home and The Gypsy in Me.

Drzbri
4,0 van 5 sterren I enjoyed the book and just finished it today
11 juli 2018 - Gepubliceerd op Amazon.com
Geverifieerde aankoop
I've not read that many books in my life but have recently taken up the hobby of reading books about around the world motorcycle trips since I don't have the time to make the trip myself. I enjoyed the book and just finished it today. This is my third book of its kind. The two prior were less eloquently written and took a more "matter of fact" approach which I kind of prefer. It took a while for me to like Jupiter's Travels but by the end I was completely absorbed by the story. In my opinion the book starts a bit slow and it takes a while to captivate the reader but stick with it and you'll be glad you took the time to read it by the end of the book.
Meer lezen
2 mensen vonden dit nuttig
Vertaal recensie in het Nederlands

Chris Abraham
5,0 van 5 sterren A travel journal and ride report written beautifully
12 oktober 2016 - Gepubliceerd op Amazon.com
Geverifieerde aankoop
I am not quite finished but I have been taking my time with this expansive real-life adventure. While this is, in many ways, a travel journal and ride report, the books is written beautifully. And the level of detail? How could he remember such detail of this travel tapestry. I guess when you really can't go very fast in many places, you spend a lot of time taking photos and notes. On the other hand, some people have amazing memories for details (and there may also be some creative licensing). I still have a lot to go but I am still completely living vicariously. Every time I get onto my touring bike I feel like there's a 10% chance I might start riding and never turn back (that's why I don't carry my passport or too much money with me). Superb.
Meer lezen
4 mensen vonden dit nuttig
Vertaal recensie in het Nederlands

Dave Murphy
5,0 van 5 sterren One of the best books I've ever read.
27 juni 2016 - Gepubliceerd op Amazon.com
Geverifieerde aankoop
One of the best books I've ever read.
What a great writer Mr. Simon is!
This book is much more about the people he meets, the government bureaucracies, scenery he sees, hotels he stays in,roads he survives and problems and challenges he has along the way as well as his rambling thoughts than it is about the motorcycle. But he does describe the challenges of motorcycling in remote places such as packing tools and spare parts along with clothing and camping gear, frequent falls from the bike, having to buy gasoline from other vehicles when he doesn't have enough, and the various repairs and overhauls that are needed.
Meer lezen
2 mensen vonden dit nuttig
Vertaal recensie in het Nederlands

Inspired by this book and several others in 2008 I bought a new BMW R1200 GSA motorcycle which now has over 30,000 miles on the odometer. My wife bought a BMW G650 GS in 2010. We live on an own a Ranch in the remote Sangre de Cristo mountain range of Colorado.

Here are some more of the books that inspired me:

The last two road trips were originally done in Ford and Volkwagen Vans but can be duplicated on a BMW motorcycle. As an Engineer the first book inspired me to study under Tensin Gyatso the XIV Dali Lama of Tibet. To paraphrase Tensin: " Images in the rear view mirror of a motorcycle are closer than they appear..... ".

J. Blilie
5,0 van 5 sterren A True Classic of Travel Writing - Make Sure You Read This Book
1 september 2010 - Gepubliceerd op Amazon.com
Geverifieerde aankoop
I don't care if you get it out of the library, borrow it, or whatever, you should read this book. This book should be on everyone's "bucket list."

I just finished rereading it for the nth time and I was just as moved, amazed, and thrilled by the journey (and the good writing) as the first time I read it. I know how the story ends; but I just want to keep on reading and reading and reading.

I rode a bicycle around the world for over two years. Ted Simon captures the feelings of long-distance, long-time traveling like no one else I've ever read (although there are some other great books out there, see below). The thrill of departure, the shock of the new, the wariness of the unsupported traveler in a strange place, the difficulties of language and even alphabet, the fear, the exhaustion, the new-place fatigue, the need to just lie down sometimes, the misery of illness (though he was very lucky there), the numinous joy of the great places and views of the world (sometimes even the most ordinary places), the pleasure in seeing, hearing, smelling, tasting new things, the joy of finding your fellow humans all around the world to be very much like you and enjoyable to meet and know, the incredible education that travel gives you, the powerfully ambivalent feelings of the end of the journey and the return to home-place, never again able to see the world as you once had. The difficult re-birth into the old routines and requirements of your life. His story, especially his description of the end of the journey gives me goosebumps and re-awakens powerful memories of my own journey. As the cliche goes (it's a cliche because it's true) you can never step into the same river twice. The closest you can come is to take someone else to the river and watch them swim.

This book has lost nothing and it never will. It touches the universals of human experience found in travel. We evolved as wandering apes on the plain. It's basic to our bodily fiber.

Very little navel gazing in this book and what little there is is actually worth reading, unlike nearly all travel books I read that were written since Jupiter's Travels.

A true classic. And not the kind you feel obligated to read; but the kind you can't put down. One of the truest books I've ever read. Enjoy.

Some other excellent books about long-distance travel that I highly recommend: