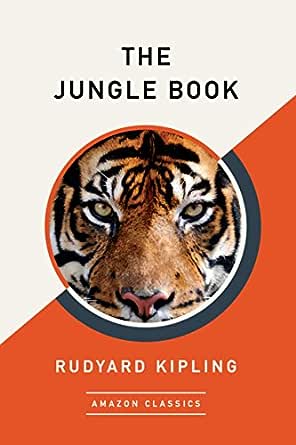 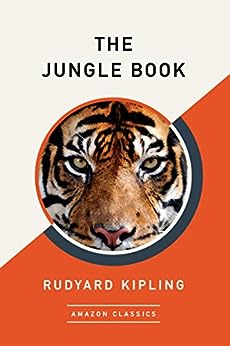 Orphaned as a baby, human-boy Mowgli is adopted by wolves, befriended by Baloo the bear, and educated in the wonders and dangers of the Indian jungle. But the adventures of The Jungle Book don’t end with the young man-cub and his unusual new family. Through tales of Kotick the White Seal, Rikki-tikki-tavi the mongoose, and others, readers learn about courage and survival, rules and order, principles and morals, coming-of-age, and the thrill of self-discovery.

Rudyard Kipling’s fables reflect both his childhood in India and his vivid imagination, while exploring the relationship between civilization and the wild.

AmazonClassics brings you timeless works from the masters of storytelling. Ideal for anyone who wants to read a great work for the first time or rediscover an old favorite, these new editions open the door to literature’s most unforgettable characters and beloved worlds.

im
1,0 van 5 sterren Don't buy this version
14 december 2018 - Gepubliceerd op Amazon.com
Geverifieerde aankoop
I won't deign to review Kipling's classic as it pertains to content, but I highly recommend you buy any other version of this book.

So the formatting is terrible. Pages break on full paragraphs ending up with huge amounts of whitespace everywhere that makes the reading slightly clunky. Chapters, on the other hand, do not break. So you can have multiple chapters/sections on the same page but _not_ parts of paragraphs. It's weird. It's like this was an e-book converted into a poor print.

Additionally, this only (at least) half of the Jungle Books collection. I would highly recommend you look for a version with the second half of these stories. For example I found a copy of "The Jungle Books" published by Penguin Classics in 1987 that was immensely superior to this version.

Barbara C.
4,0 van 5 sterren Some illustrations could have been discreet
11 juli 2018 - Gepubliceerd op Amazon.com
Geverifieerde aankoop
This book was released July 1, 2018 and I pre-ordered without reviews as none were available. I was surprised to find 2700 reviews on this book right after Amazon received it in mid-July, 2018. My review is for "this specific book." Amazon has generic reviews listed for this book of all the Rudyard Kipling "Jungle Books" they sell, so we customers do not know what reviews applies to what books. Amazon did this also with Rudyard Kipling's Just So Stories many books Amazon sells. Not acceptable! This specific book, released July 1, 2018, is abridged with illustrations that can help a child understand how a boy could grow up with animals in the wild. Well written story. Definitely for ages 5 and up. I will give it to my grandson, but feel I cannot give it to my granddaughters because it has various illustrations of boy nudity from the back. 1 picture of bare butt would have been enough; the other illustrations could have had foliage discreetly hiding the nudity.
Meer lezen
20 mensen vonden dit nuttig
Vertaal recensie in het Nederlands

Reinold F.
5,0 van 5 sterren Exotic and masterly jewel of oriental fulgor. (AmazonClassics edition)
24 juli 2019 - Gepubliceerd op Amazon.com
Geverifieerde aankoop
I don't know if the India that Kipling transmits is the India of his time. But it's a meaningless question. Art, with time, remains more real than the debris left by history: we love and know more about Don Quixote than Charles V. And so the India of Kipling is totally real to me, as are my Indian friends. Except that in Kipling with a touch of the British spirit of its time to, not only control the world, but to make it theirs. If you read the fiction of most of writers from the former countries of the Spanish Empire you will notice that, despite centuries of ancestors living there, they write about nature and natives as if they were something terrible and alien; Kipling instead embrace, and makes us embrace, the whole of India with deep love.

Although Disney movies could make you think otherwise, this is a unique book of tales and songs with different protagonists, mostly animals, and certainly not only Mowgli. An exotic book as Bollywood movies are today, with their stories and their dances in between. I loved so much the descriptions of Bagheera, a sensuous shadow of velvet. The jungle so dense and so old. The ocean and the wars to survive in "The white seal." Conflicts fueled by familiar bonds in "Rikki-Tikki-Tavi," a tale in which I don't think there is really an enemy. The almost supernatural call in "Toomai of the Elephants." The last one, "Her Majesty's servants", I consider it more comical and maybe satirical. It was nice, but I didn't liked so much as the rest.

This AmazonClassics Edition has X-Ray, although when I consult the entry for Rann the kite, it gives me instead the description of a place instead of the character. Also, with many exotic terms, some of them are not explained in the X-Ray section. Maybe they are evident for most of the readers but I would liked to have a bit more data. In the end there is a short biography and that's all. There is no intermediary to spoil the fun, with introductions or studies, to read this great book that you can enjoy and learn at any age.
Meer lezen
2 mensen vonden dit nuttig
Vertaal recensie in het Nederlands

Bones
1,0 van 5 sterren Extremely poor quality, miserable font/typeface, zero illustrations
9 september 2018 - Gepubliceerd op Amazon.com
Geverifieerde aankoop
I was a victim of the Amazon Practice of putting many products under the same product description and with the same pool of reviews. This is good for sells of crappy products, as it makes it appear that many people are purchasing the product and additionally averages up the apparent review rating.

Despite the description and many of the reviews discussing illustrations with in this “children’s book“, the copy I received had zero illustrations, no page numbers, ugly/tiny font, inconsistent formatting, stories that ran together, it essentially no other redeeming value.

It would have been a much higher quality experience to download this public domain set of stories from the Internet and show them to my children on an iPad. I wanted them, however, to have experience of holding a nice book in their hands while they read Kipling’s Jungle Book stories.

This is not that book.

I can hardly believe that someone allowed this to be published without even the smallest semblance of attention being given to format.

I have included a couple of photos to give an idea of what to expect.
Meer lezen

Alexander Teel
1,0 van 5 sterren Not as described, horrible image quality
28 november 2018 - Gepubliceerd op Amazon.com
Geverifieerde aankoop
I'm very upset about this purchase. First of all, the description says that it includes other Jungle Book stories and it does not. Second of all, the illustrations are horribly horribly printed, some are so blurry and pixelated that they are near unrecognizable. This is a horrible "collection" and I feel totally cheated.
Meer lezen
5 mensen vonden dit nuttig
Vertaal recensie in het Nederlands
Ga naar Amazon.com om alle 944 recensies te bekijken 4,4 van 5 sterren
Terug naar boven
Over ons
Verkoop bij ons
We helpen je graag
© 1996-2020, Amazon.com, Inc. en dochterondernemingen